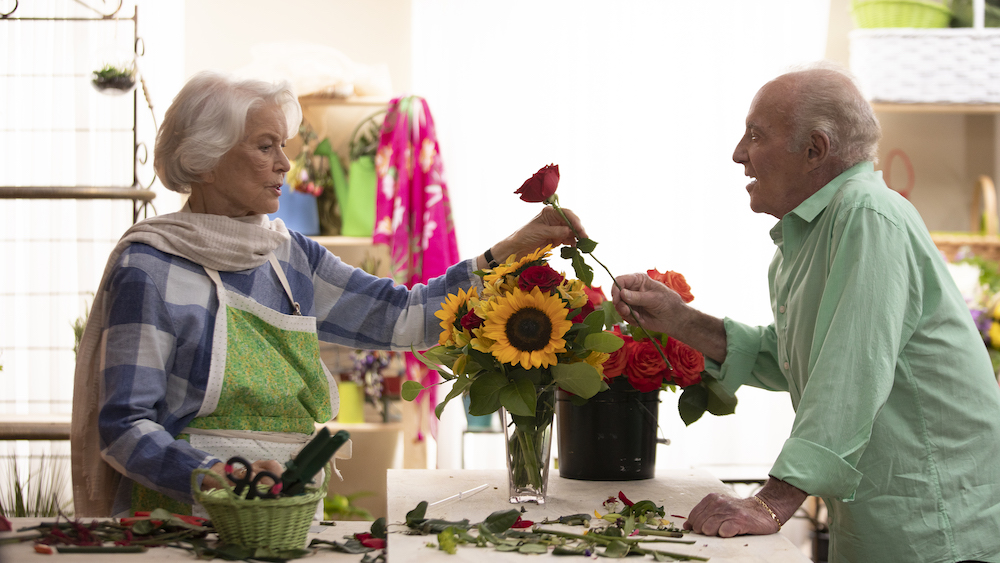 Writers: Donald Martin (screenplay by), Harrison Powell (based on a story by) (as Harrison A. Powell)

There will always been a place in the world for older-skewing movies as pleasant as “Queen Bees,” a lightweight but likable comedy set primarily in a retirement community where close friendships are forged — sometimes reluctantly, sometimes immediately — and autumnal romance can blossom. For years, their natural habitat has been bargain-matinee multiplex screenings, where over-50 ticketbuyers might attend solo, in groups or accompanied by children and/or grandchildren. More recently, viewing options have expanded to include the modern miracle of VOD. But any way you look at it, director Michael Lembeck’s indie offering is bound to please nearly anyone in its target demographic who isn’t easily offended by unmistakable indications that, as the old saying goes, although there’s snow on the roof, fire can still burn in the hearth.

Ellen Burstyn heads the unusually strong cast of familiar faces as Helen Wilson, a fiercely independent retired schoolteacher who — much to the dismay of Laura (Elizabeth Mitchell), her slightly control-freakish daughter — is determined to keep living in the spacious house where she shared so many good times with her three-years-deceased husband. But after she accidentally causes a fire in her kitchen, Helen is forced to move into a retirement community while extensive damage is repaired. The relocation, she insists to anyone who’ll listen, is only temporary. Sure.

Shortly after she settles in at Pine Grove Senior Community, Helen runs into the unofficial rulers of the roost: much-married Margot (Ann-Margret), free-spirited Sally (Loretta Devine) and their ringleader, the sternly matriarchal Janet (Jane Curtin). These “Queen Bees,” Helen tells her attentive grandson Peter (Matthew Barnes), “are like mean girls, but with medical alert bracelets.” When a fourth member of the geriatric clique conveniently dies, however, there is an opening at the card table. And Helen just happens to be an ace bridge player.

Things proceed apace — predictably, yet amusingly — as love (or, to be more precise, lust) instantly binds Margot and Arthur (Christopher Lloyd), a Pine Grove newbie with a seemingly turbo-charged libido, while Helen takes considerably more time warming to the romantic overtures of Dan (James Caan), another recent addition to the retirement community.

Janet, a chronic sourpuss with a touch of Iago about her, periodically commits malicious mischief to complicate things, leading to a third-act revelation that seems cribbed from a turn-of-the-century romcom. More often, though, “Queen Bees” plays like a 1980s or ’90s sitcom — hey, did somebody say “The Golden Girls”? — complete with “very special episodes” involving cancer threats and other mortal stakes, and wisecracks that sound hand-tooled for laugh-track accompaniment. (Asked if Helen exercises, Laura replies, “She burns most of her calories rolling her eyes.”)

On the other hand, there are good reasons why many of those decades-old sitcoms remain enduringly popular on cable TV, not the least of which being the potent chemistry of their casts. A similar sort of charm propels “Queen Bees,” as well-cast supporting players like French Stewart (as the excitable Pine Grove manager) and Alec Mapa (as a philosophical Filipino masseur) have their moments to shine, and the leads interact with crowd-pleasing deftness.

Burstyn and Caan are so effortlessly charming together, you find yourself wishing they would be cast in a long-afterwards sequel to “Same Time, Next Year.” Lloyd and Ann-Margret are affectingly pitch-perfect in a payoff scene for the relationship between their characters, Devine brings equal flair to funny business and serious stuff, and Curtin is hilariously hateful until she doesn’t have to be.

There are about a dozen different ways “Queen Bees” could have soured into something unbearably silly and condescending — like, say, 2017’s unfortunate “Just Getting Started” — while dealing with the diminished physical abilities and unabated physical desires of its older characters. Fortunately, director Lembeck and scripter Donald Martin are savvy enough to avoid almost all of the booby traps — even while Helen and Sally are talking about, well, boobs — and emphasize the rueful self-awareness of those Pine Grove residents who want to enjoy their twilight days to the fullest before they go gentle into that good night.