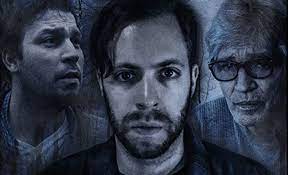 After his brothers’ strange disappearance, a man and the brothers’ girlfriend decide to start looking into the incident which draws them into the harrowing final adventure of his life where his unhinged behavior after moving into a remote cabin in the woods reveals some deadly consequences for them all.

This turned out to be a rather creepy and effective faux documentary. This is essentially the films’ best quality, as the style of interviewing the various figures associated with the mystery serves the film nicely. Since the first half revolves rather nicely around the slow-building layout of the disappearance by giving an idea of who the guy was and where the investigation into their lives will go.

Seeing their brotherly relationship, the idea of what’s going on at the house, and the little things happening around him that are setting up the potential to come later on when everyone keeps making strange notices about his behavior all manage to provide a genuinely creepy and eerie setup from this found-footage approach.

The second half, where the more found-footage style incorporated by the home videos offers a lot to enjoy about it. The creepiness of the encounters, from seeing the same scarf all over the woods and spotting the lanterns laid out like a graveyard to scenes of the two going through a previously inaccessible room to find scores of creepy dolls and a mysterious tape inside. These take full advantage of the generally chilling use of found-footage as the early setup of his situation places all of his encounters and confrontations that provide this with some great encounters that pick up the intensity pretty nicely.

For the most part, these aspects are what hold this up overall as there are some slight flaws to be had with this one. The main issue is the seemingly back-loaded amount of action that tends to place all the supernatural entities and appearances until then where the front section is much more scenario-building. While these are all required to give this a generally creepy air and mystery

overall, having the film structured to featuring the more frenzied activity at the end might make the first seem a bit plodding and dull for some. As well, there is a bit of a meandering feel with the finale which ends the film at a great point and then keeps going on which is a bit of an underwhelming feature that might end this on a sour note. However, none of these are really detrimental and don’t hold it back that much.