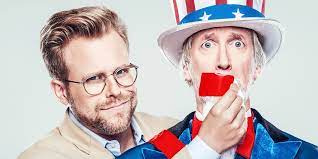 Netflix likes to partner with influencers and respected filmmakers, having signed long-term deals with David Fincher, Ryan Murphy and now even Sussexes Meghan Markle and Prince Harry. In 2018, they entered into a multi-year deal with Higher Ground, a production company founded by former POTUS himself Barack Obama and former First Lady Michelle Obama. This partnership began with the very successful American factory, which won the Academy Award for Best Documentary the following year. The company is now back with an all-new docuseries focusing on all major aspects of government (the G-word in the title), presented by American comedian Adam Conover.

TV host and comedian Adam Conover tries to bring some educational fun to the notoriously boring subject of government. He’s a confident and lively host, who tries to elevate the subject with an abundance of jokes and some heartfelt human stories, although the humor is terribly grating and our fast-paced presenter conveys a certain level of arrogance in his smug delivery. . Not liking the host is a big hurdle to overcome, but this show actually grows on you as the episodes go on. Would advise sticking with this one after its first dragging episode.

This six-part series covers how governments approach food, water, money, the future, disease and change. Each chapter follows a similar structure, as the host presents an array of questions to ponder before tackling the main issue of that specific episode, using sketches and personal and real-life encounters. The sketches unfold like horror stories sketches, reusing the same actors and capitalizing on the incessant and unfunny spirit of the series. Don’t miss a few appearances by Officeby Oscar Martinez (Oscar Nunez) and a magic trick by Penn & Teller. Obama himself also makes an appearance on the show, discussing the purpose of the show in the intro and his thoughts on change in the finale.

For a series financed by a former president, one would expect a larger budget. This show has some truly awful CGI, presenting itself as a kind of fly-on-the-wall Louis Theroux-style documentary. Like Theroux, Adam Conover participates in the more practical scenes of the production, with a standout moment involving the camera crew actually flying into the eye of a storm. Conover does a valiant job of trying to make the series enjoyable and educational, literally throwing everything into it. The jokes may not all hit the nail on the head, but its harmless approach to puns and self-parody winds up punching through and entertaining.

It is difficult to determine who this show is really aimed at. The series remains fairly tame, but there’s strong profanity sprinkled throughout and the quick, jargon-filled explanations can be hard to follow at times. Will teenagers or adults be amused by these embarrassing dad jokes coupled with complex problems to solve? Plus, Netflix has done this style of informative docuseries many times before with much more success. I would recommend Explain and its countless benefits for a much more efficient use of your time. Overall it’s a mixed bag, there are positives to this innocuous and knowledgeable six-parter, but the lack of humor and its polarizing host may put many people off.