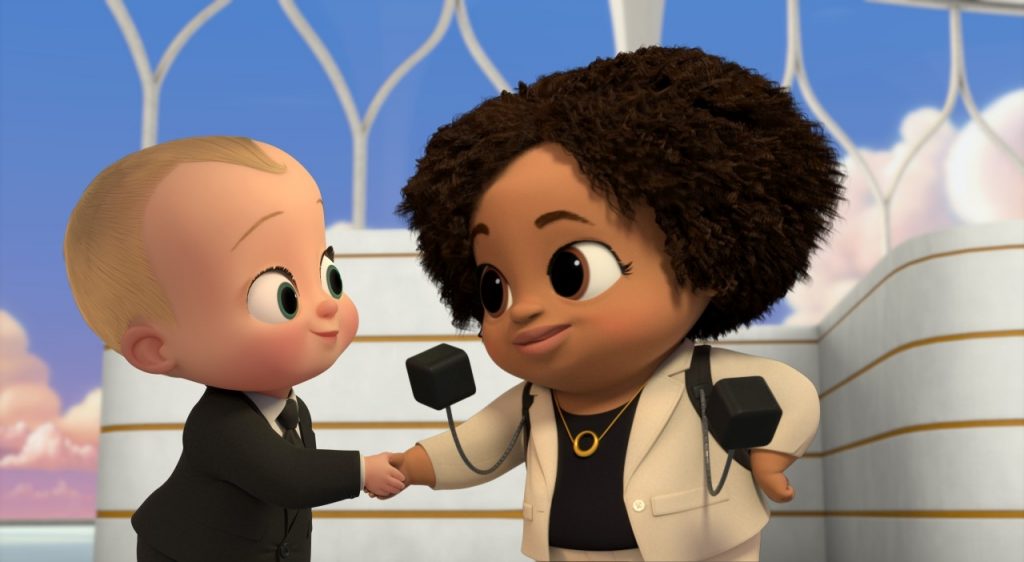 In prison for corporate crime, Boss Baby is forced to return to being an infant and climb back up the ladder in the brand new DreamWorks Animation collection. The Boss Baby: Back in the Cradle. The computer-animated kids’ comedy is based on the hit movies will premiere on the 19th of May on Netflix.

The events of The Boss Baby: Family Business, Theodore Templeton is framed for embezzlement and forced to revert back to his old Boss Baby self. He crashes with his brother Tim and his two nieces, brainy big kid Tabitha and fellow Baby Corp employee Tina. Together, Boss Baby and Tina co-lead a new Field Team fighting to increase Baby Love while keeping a new group of arch-nemeses – The Uncuddleables – from destroying Baby Corp itself.

Netflix and DreamWorks Animations have released a brand-new trailer for the latest entry in The Boss Baby franchise, the upcoming animated series Boss Baby: Back in the Crib. The brand-new trailer was revealed on the official Netflix After School YouTube channel and sees many returning faces from earlier entries in the franchise, including the likes of the boss baby himself Theodor Templeton, as well as the whole Templeton family. While most of the original voice cast has been replaced for the series, JP Karliak and Ariana Greenblatt are reprising their roles. The new trailer centers on the impending power struggle between Theodor and Tina at Baby Corp.

This new animated series picks up after the events of the 2021 film The Boss Baby 2 and sees the titular Boss Baby, Theodore Templeton, framed for embezzlement. He must team up with his brother, Tom, and his nieces, Tabitha and Tina to fix the mess he finds himself in. The series will consist of a total of 12 episodes, each one running for 22-minutes.

“We told young Tim and Teddy’s story, and I’d like to think we even stuck the landing before handing our baby back to the feature team. But just as we were tiptoeing out of the room, we saw what Tom McGrath and company were doing with their feature sequel, and it happened: The baby woke up. And he was very hungry for more.”

Karliak, who debuted in the series in Back in Business, will be reprising his role as the voice actor behind the lead character Theodore ‘Boss Baby’ Templeton, though the cast that is working on the project will be seeing many new voices. The cast for the series includes Max Mittelman as Tim Templeton, Mary Faber as Tina Templeton, Krizia Bajos as Carol Templeton, Greenblatt as Tabitha Templeton, Alex Cazares as JJ, and Nicole Byer as NannyCam No Filter CEO Baby. The series will also see guest stars with Andy Richter as Board Member Bradley and Kyle Chandler as Ranger Safety Binkerton. Matt Engstrom, director of multiple episodes of Boss Baby: Back in Business, serves as supervising producer.