The Drover’s Wife: The Legend of Molly Johnson 2022 Movie Review
Skip to content 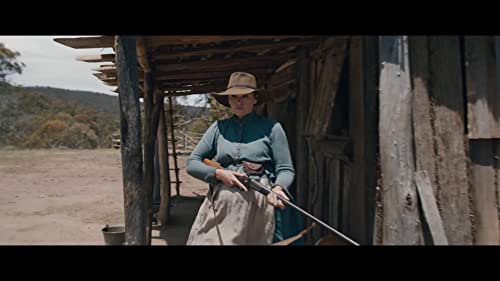 The Drover’s Wife: The Legend of Molly Johnson 2022 Movie Review

There are many touchstones in Australian literature that you must look at in school, and one of the big ones from the 1800s is Henry Lawson. One of their more famous works is that of The Drover’s Wife, a story of life on the ‘frontier’ in 1983. It is an interesting tale of survival against the elements, but it also glosses over many realities of the time. Today we are looking at a film that takes that central premise and then reinterprets the story from a different perspective.

So to set the scene, it is 1893, and high up in the Snowy Mountains, a lone mother, Molly Johnson (Leah Purcell), is watching over her home and four children while her husband is away droving sheep on the high plains. Her husband is away for months at a time, so she has to be resourceful, like when she takes out a wandering bullock that was about to attack her kids. But as she is cooking the meat, the new town Sergeant Klintoff (Sam Reid) and his wife Louisa (Jessica De Gouw) arrive destitute after losing it all in the river. Molly helps them and sends them on their way because they can take her kids to town, so she can give birth uninterrupted.

One of the first things you see is how the cinematographers know how to capture the countryside. There are these long time-lapse scenes of the landscape that can be equal parts beautiful and haunting, bringing you into a world that is both harsh and isolated but full of wonder. You need this to set the scene and the world because that isolation plays into every facet of the narrative and bleeds into every character and their actions. The film gets all those period-appropriate details correct, in the clothing, weapons, and buildings. Also, for a movie based on a play, it was good that it never felt like a theatre production but on location, like many similar projects.

The next thing that captivates you is the acting, which is needed to tell this complex story. It is clear that this is a very personal story for Leah Purcell, and films where the primary cast member is also the writer and director often fall flat, not here. Leah has a way of speaking volumes with a single look. It cuts through the other characters in the film, and it cuts through you in the audience as you watch it. This is supported by Rob Collins playing Yadaka in what might be his best performance to date. There is a sense of danger to him and his performance and someone who is full of care. Another strength is Malachi Dower-Roberts, who plays Molly’s eldest son Danny. He has to give a very nuanced performance, which would be difficult for an actor with a lot more experience, and he nails it.

This is also a film that is not afraid to deal with challenging themes and hold up a lens to society. The Drover’s Wife takes the original story and reframes it through an Indigenous lens and exposes both the internal and external prejudices that permeate the land of 1893 and, frankly, the land today. There is also a subplot revolving around domestic abuse and its impact on society which is demonstrated in a very confronting manner. Many of these issues could have come off as forced if the quality of the narrative and acting was not as elevated as it was here.

The Drover’s Wife: The Legend of Molly Johnson 2022 Movie Review