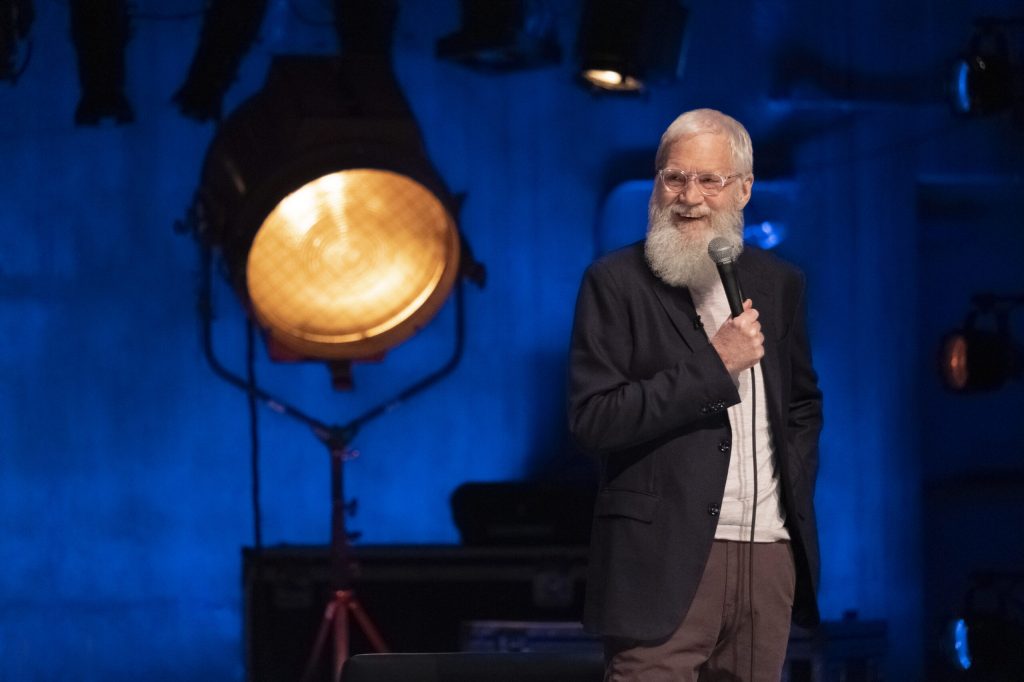 Recorded during the April 28 – May 8 Netflix Is A Joke Fest, That’s My Time With David Letterman brings the late-night legend back somewhat to his roots. Instead of serious and semi-serious interviews with entertainment and political notables, like on his other Netflix series My First Guest Needs No Introduction, Letterman concentrates purely on comedy here.

In each 18-minute episode, Letterman does a five-minute monologue and interacts a bit with the audience. Then he introduces the featured stand-up comic, who does the usual “tight 5” you see on a late-night show. In the first three episodes, the comedians featured are Sam Morril, Naomi Ekperigin and Brian Simpson. After the stand-up does their set, Letterman interviews them for the remaining 8 minutes, giving the comics more room to wedge in more jokes, the classic “sitdown stand-up” method that comics have been doing since Johnny Carson was king.

Like most stand-up segments you see on late night, what we see on That’s My Time is hit and miss. We liked Simpson’s misanthropy, hating the fact that people can’t differentiate between “ammonia” and “pneumonia.” He was the only one of the three who really took advantage of being on Netflix, peppering his five minutes with plenty of language. But we liked Ekperigin talking about her “Jewboo”, and Morill’s personal line about his biological father not being a great guy “or I would not refer to him as my ‘biological father’”.

But these episodes are almost as much about Dave than about the comedians he’s featuring. We know that Dave’s flinty edginess has mellowed during his beard-wearing semi-retirement, but his dry self-deprecation hasn’t gone anywhere. And what we noticed is that Dave is insanely relaxed during these segments, in a way we never saw during all the years he was doing late night.

There’s a couple of reasons why we think he’s that way. One, featuring stand-ups is something that’s always been at the core of either of his late-night shows. And even during the monologues, which are written by head writer Mike Sweeney and writer Mike Gibbons, he feels completely at home. But there’s the added element where Dave just doesn’t give as much a fig about this show than his late night shows. It’s not like he doesn’t care, but we’re pretty sure he doesn’t beat himself up like he used to when a show went poorly.

Dave is just happy to be on stage talking to funny people, and it shows in his manner and how relaxed he is during the interview segment. Of course, with the help of pre-interviews and a backstage meeting before the show, Dave is able to skillfully lead the comedians into doing other pieces of standup. But he does ask personal questions, like when he talked to Simpson about being a foster kid who went directly into the Marines after aging out of the foster program. But Dave generally keeps things light, falling back on the skills he used to interview thousands of stand-ups during the 33 years he was in late night.