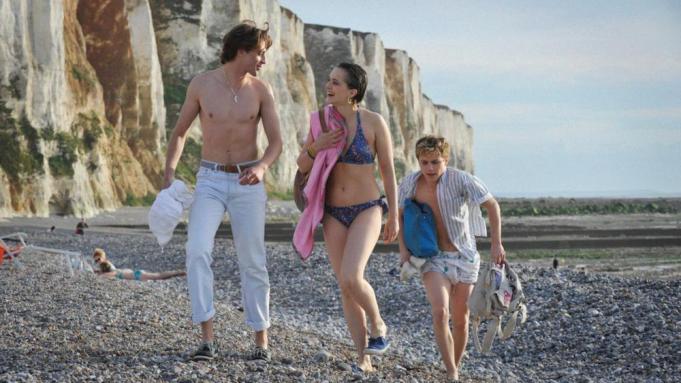 Not since the summer of 2003, when François Ozon unveiled Sapphic sizzler “Swimming Pool” at the Cannes Film Festival, has the French director seduced audiences quite as brazenly as he does in “Summer of 85,” which was also set to premiere at Cannes, before the global coronavirus outbreak forced the cancellation of the 2020 edition. Undaunted, the film opened July 14 in French theaters, which have rebounded faster than those of the U.S., with a festival premiere planned for San Sebastián in the fall.

A breezy first-love flashback to more innocent times, Ozon’s latest recalls life not just before COVID-19 but, more importantly, before AIDS overshadowed what it meant to come out (HIV was already ravaging the gay community, but it wasn’t till the death of Rock Hudson in October 1985, a few months after the film is set, that many acknowledged the crisis). The nostalgia here is undercut by tragedy, though no virus is to blame in what feels like Ozon’s response to “Call Me by Your Name” — his own effervescent account of two souls who found one another for a single season, and how that shaped a young man’s sexual identity going forward.

Think of this as an excuse for Ozon to revisit and revive his own cinematic past, which involved overhauling an unproduced screenplay written 35 years earlier, an adaptation of British YA author Aidan Chambers’ 1982 novel “Dance on My Grave.” Ozon initially imagined the project as an American-style coming-of-age story, à la “Stand by Me,” and indeed, this one also concerns a dead body and a group of teens.

In the opening scene, police have arrested Alexis Robin (Félix Lefebvre), who reminds his mother that he now prefers to be called “Alex.” The boy is at that pivotal stage when he starts to assert his identity, and now, he’s being detained for what Ozon wants audiences to believe is the murder of his best friend, David Gorman (Benjamin Voisin, a star in the making). Although that mystery is misleading, it supplies a kind of tension to the reverie that follows, as Alex leads viewers through the events that precipitated his arrest. It also links “Summer of 85” to the director’s earlier and more overtly suspenseful work.

Back in the late ’90s, Ozon’s movies were unabashedly queer, hotblooded and hormone-driven affairs, explorations of jealousy and desire that dared to meld overripe Almodóvarian sensuality with Patricia Highsmith’s gift for the macabre. A poster for Ozon’s first feature, “See the Sea,” flaunted boldface critics’ quotes connecting the new director to the traditions of Claude Chabrol, Roman Polanski, Eric Rohmer and Alfred Hitchcock — fair associations all, except that such comparisons threatened to ignore what was most Ozonian about Ozon’s cinema.

In those days, the surfaces of his films seemed to radiate with sexual energy — like prickling hairs on bare skin — while a kind of lusty homicidal danger lurked just out of sight. “Summer of 85” reminds us what makes the Ozon touch so unique. It’s a welcome return to form after a long stretch in which his career took a more serious turn via such dramas as “Under the Sand,” “In the House” and last year’s award-winning abusive-priest drama “By the Grace of God.” Those were fine films, which cemented Ozon’s reputation as a respectable director on the international stage, although his most ardent fans have long craved a throwback to the seductive, borderline campy thrillers he used to make.

From the top, audiences understand that David Gorman is presumed dead, and that Alex did something to his corpse — but it could have been the other way around. Rewind several months: Alex is shown taking a tiny sailboat out in a storm. He capsizes, only to be rescued by a tall, pec-tacular young man, David, who brings him home to dry off. There, his mother (Valeria Bruni Tedeschi, weirdly one-note) promptly orders Alex into the bath, taking the trouble to strip the kid of his wet clothes herself.

It’s too early to know where things are headed, but Ozon has wasted no time in sexualizing the situation — and besides, neither age nor gender has been an obstacle to attraction in his films. Now it’s only a matter of time before Alex’s deflowering, which ultimately happens off camera in a rare moment of inhibition from Ozon. Perhaps imagination is more powerful than anything he might have shown.

Channeling the cocky strut and carefree attitude of Nicolas Cage in “Valley Girl,” David adopts the slightly younger Alex, buying him presents, taking him for risky motorcycle rides and giving him summer work in the family shop. He is everything Alex seems to want in a partner, although an English tourist named Kate (Philippine Velge), whom David also seduces with his wide smile and confident airs, later questions whether David was really all that they imagined. “So we invent the people we love?” Alex responds.

It’s an insight that will serve him well going forward, one hopes, now that David has opened the door to who he truly is. The movie has dug a hole for itself with the disingenuous framing device, and the last act feels like a cheat, revealing Alex’s “crime” to be anything but. While the midsection of the film proves to be the most charming — a kind of extended montage in which the young men tentatively test the limits of their relationship — it’s the final stretch that situates “Summer of 85” squarely within Ozon’s oeuvre. Among the many connections is a cheeky cross-dressing gag that recalls his scorching 1996 short “A Summer Dress,” easily the sexiest entry in Ozon’s filmography.

Even the texture is similar — not of the dress, although the design of both garments is remarkably similar, but of the visuals overall. Ozon shot on 16mm film to better capture the period and paid particular attention to costumes (feathered hair and faded jeans for the guys, a Madonna-inspired look for Kate) and soundtrack choices. When it comes to fulfilling the promise suggested by the book’s title, Alex picks Rod Stewart’s “Sailing.” But it’s Bananarama that says it best, both of 1985 and 2020, as they sing, “It’s a cruel — cruel! — cruel summer.”