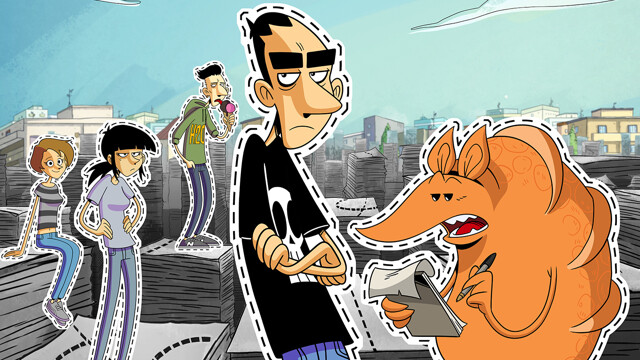 In 1957, the Soviet Union launched a dog named Laika into orbit. It was a major milestone in the space race, but it did not end well for Laika. Hopefully, the canine stars of Netflix’s new animated series Dogs in Space will fare better.

I have to assume they will, because they’re drawn Hello Kitty-level cute, and this very much looks like a cartoon made for children with bright colors and silly jokes and seemingly no inclinations toward skewing anything for older audiences.

And just in case you’re having trouble wrapping your head around the show’s title, here’s a description from Netflix instead: “In the not-so-distant future, genetically enhanced dogs are sent across the universe in search of a new home for the human race. It’s a giant cosmic game of fetch, as the canines seek a planet that will save humanity and—more importantly—let them return to their beloved owners.”

I’m skeptical of any owners who allowed their pets to be launched into space for a mission that surely would be better handled by humans, but I do appreciate that the show seems to go very light on the dog-based jokes, e.g. no gags about a planet where the aliens look like fire hydrants. Given that show’s first season includes 10 19-minutes episodes, stale dog tropes would get very old very fast.

Dogs in Space, a show about animals called canines that is set in the endless, inky, empty expanses of the universe, stars Haley Joel Osment as Garbage, Sarah Chalke as Stella, Kimiko Glenn as Nomi, Chris Parnell as Ed, David Lopez as Chonies, William Jackson Harper as Loaf, and J.P. Karliak as Happy. It will premiere on Netflix on November 18.