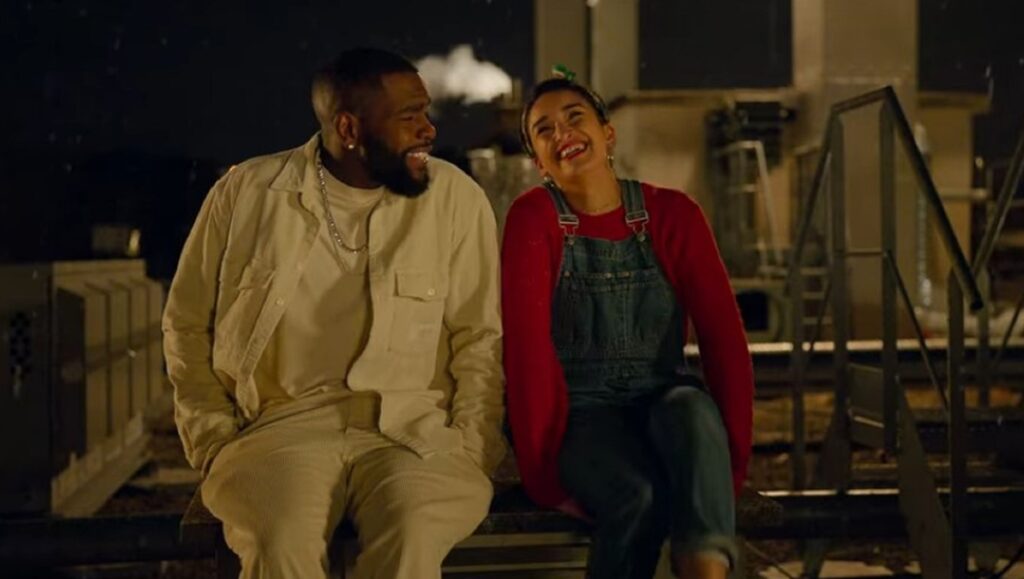 Netflix is ​​already opening the festivities with its first French-language Christmas series: Christmas Flow. A romantic comedy full of optimism that surfs on current feminist issues, without taking the time to delve deeper into its subject.

As the lights begin to grace our streets, toy ads populate our screens and Advent calendars take over our shelves, Netflix has taken its ticket to join in the fun, with Christmas Flow, available since November 17th. Created and written by Henri Debeurme (Missions), Victor Rodenbach (The big ones) and journalist Marianne Levy, the French mini-series begins with a fairly current premise. Marcus is a rapper, winner of multiple musical awards and author of sexist texts claimed, condemned by justice.

On Christmas Eve, in a Parisian shopping center, he fell in love with Lila. A feminist and committed journalist, the thirty-something does not intend to put her convictions aside for a simple “crush”. For three episodes, they will seek each other, yield to the power of love and then hate each other, in a love waltz so classic that it becomes boring.

This is the whole problem of Christmas Flow : the mini-series never goes to the end of its ambitions. #Metoo, the links between man and artist, brands that use feminism as a marketing argument… The topics covered are multiple and relevant, but clearly lacking in depth. Admittedly, it is a romantic comforter, a little marshmallow, and which must therefore retain its dose of optimism to be effective. But the series could have used all these elements to renew the genre and offer a real committed message.

Instead of this social purpose, Christmas Flow only touches on these issues, probably for lack of time. Everything is so condensed into three 50-minute episodes that the characters and situations don’t have time to develop at their own pace.

Same observation on the production: it lacks a touch of originality and madness, even for a Christmas TV movie revisited version 2021. Other series on the same themes, such as Dash and Lily, benefited from a more exciting aesthetic. The soundtrack also questions: the central character is a rapper, but the viewer must be content with a few minutes of freestyle and the same music repeated in the background. Add to that one or two feminist titles like The grenade by Clara Luciani, placed in a rather incongruous way, and voila. In short, the whole gives an impression of “quickly done, well done”, which clearly lacks flavor.

However, on the casting side, Netflix has put the small dishes in the big ones. The leading duo is embodied with a lot of charm by Shirine Boutella, already impeccable in Lupin, and by singer Tayc, who is currently a hit in Dance with the stars. They are accompanied by Camille Lou (I promise you), Aloïse Sauvage (Stalk) or Marion Séclin (Zérosterone). But this young cast and of a communicative energy is unfortunately put at the service of rather caricatural characters, who again lack development: the superficial influencer, the slightly edgy lesbian feminist… Clichés which cast doubt on the true commitment of the series , too much on the surface to be true

But after all Christmas Flow remains a candy dripping with marshmallow, intended to make us believe in love. And if we stick to this mission, the series fulfills its role. All the ingredients for Christmas are there: invading families, secrets revealed, couples made for each other and differences overcome under a branch of mistletoe. From this point of view, Netflix has succeeded: to make sexy a scenario worthy of a Christmas TV movie that has been played every year for ten years. And basically, what more could we ask of him than to warm our soft little hearts in winter? In a context of Covid and global crises, it may already be not bad.