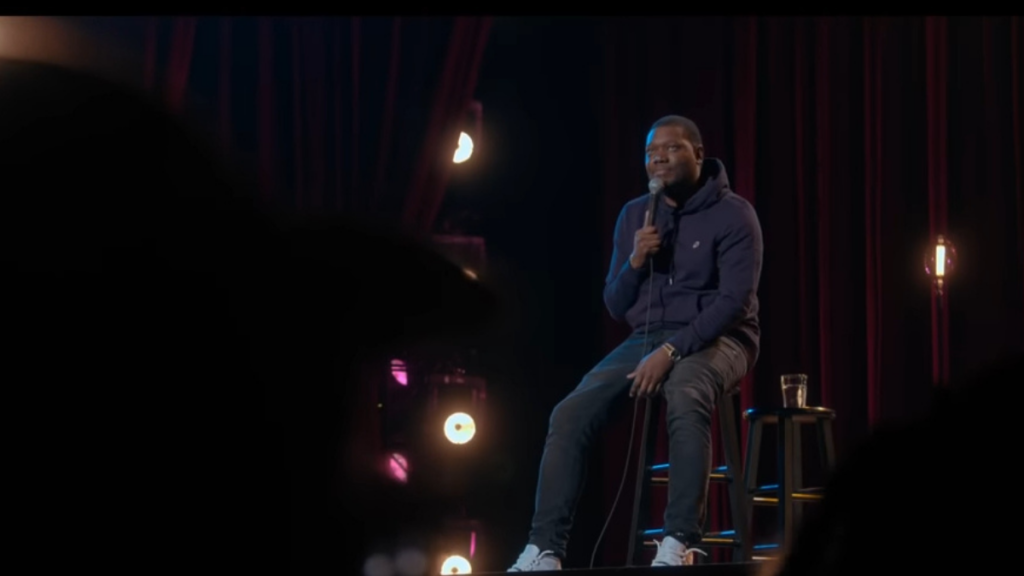 It’s been five years since Michael Che released a Netflix special. Last time, the vibe was ecstatic: In Michael Che Matters, he bounced excitedly around a thrust stage, dipping his microphone stand like a dancer; a band kept his entrance and exit loud. “I think Hillary Clinton’s gonna win,” he told that amped-up, August 2016 crowd. “She’s a white lady. White women take whatever the fuck they want. They took Brooklyn!” The show felt loose and bright. The mood was running hot.

By comparison, his latest, Shame the Devil, is his roll-out-of-bed special. It’s a chat on the stoop, a late-night musing, a hangout with a buddy to shoot the shit. Without moving from his stool or shifting his slouch, Che runs sleepily through his act in the cavernous darkness of Oakland’s Fox Theater. There’s no obvious salesmanship — or rather, there’s the studied salesmanship of relaxed amiability. Nobody’s trying here, man. You know how hard it was to put on pants with a waistband after the shutdown? Just be happy he’s in shoes.

And I am happy, because it makes Shame the Devil a refreshingly downbeat experience. I’ve heard of criticism offered more in sorrow than in anger, but Che’s latest is comedy offered that way. The brutal pace of Che’s Saturday Night Live co-head-writer job, the vaudeville rhythms of his HBO Max show, That Damn Michael Che — both gigs feel exhausting even to think about here in the pandemic’s long tail. It seems strange to say about a set that includes a joke about how to measure one’s vaginal capacity (it involves a bucket), but Shame the Devil has a sort of soothing quality, a lullaby sadness, a rarity in a world of comedy specials that rile you up.

Che’s title, Shame the Devil, implies truth-telling to come, and there are some deeply felt sequences in the hour-long show: He closes, for instance, with a few powerful remarks about Black mental health. For much of the special, though, he’s offering apologies then taking them back, giving explanations then rolling his eyes. Che barely mentions COVID deaths or disease, but he can seem melancholy and inward, his thoughts dwelling on criticisms he’s gotten and whether he feels they were deserved. He talks a little about a breakup and claims he’s going to stay single forever. What preoccupies him most, it seems, are the times when people have gotten mad at him.

When he wants laughs, he gets them by riffing on creaky clichés, which is to say “dependable material.” Che goes deep on periods, and I think most of us had a tight five on that in high school. Did you know periods make broads tomatoes ladies irritable? Lest you think women are from Venus and that’s where he’s gonna leave it, Che starts with a long (ha), soft (sorry) section on penises. “I don’t know why men are so obsessed with their dicks,” he says. “Every dude in here has measured his dick before, and I don’t mean just with a ruler. I mean anything that could be the shape of a dick … Ladies, if you ever go in the bathroom and you see the remote control in there? You’re like, Why is the remote control in here? ’Cause we gotta get scale!” He does not understand why guys are so obsessed with their wangs, yet he’s spent his whole life thinking about why they think about it. Uh-huh. The use of the word “ladies” is a tell. There’s a whiff of Jerry Lewis (“Hey, lady!”) and the Borscht Belt in these gags. Take my girlfriend, please.

Shame the Devil doesn’t think these are the hard truths, though. The guys-’n’-girls schlock is just there to cushion the things he actually wants to talk about. He mentions the January 6 violence with mock awe — “That was some good fucking looting,” he marvels. He complains about a lack of Black leadership. In these sections, which sharpen into excellence, his manifest exhaustion becomes part of the message. His tired air lends real edge to his comments about a racist America, the unending sense of being unwelcome, the way you still can’t find wave grease in a CVS, the dogged ignorance that white people maintain about their own neighbors.

His other dominant theme is criticism. To his infinite credit, Che does not mention “cancel culture,” even when he’s addressing blowback. (He’s been dinged in the past for saying he liked Trump, who was once nice to him after hosting SNL, and for hinting he might make a crack about Simone Biles, among other things.) He doesn’t clap back at those who have criticized him (he reserves that for Instagram), though he notes he has a dark sense of humor. Instead, he defends himself as well meaning or swears ignorance. He claims he had never heard of “deadnaming” when he tried it on Caitlyn Jenner on SNL, and he says being called homophobic hurt him. He gives the sense of being genuinely vulnerable to such accusations. “I have gay friends; I work with gay people,” he says. “But then I started to, like, look into myself, like, Well, damn. Maybe there’s something I don’t know? Am I homophobic?” Then when the audience reacts, he stops short, looks right at someone sitting in his eyeline, and chuckles. “When you did that laugh, I thought, That’s a gay-ass laugh.” He takes a beat. “I’m kidding. I’m kidding. It was a joke. I couldn’t pass [it up].”

There it is. Che deeply wants to please. That makes him both eager to use a slur if the audience will like it and wounded when folks call him out. It’s a milder, less consistent version of Dave Chappelle’s nasty gag about feminism — “What could I possibly be saying that would make these bitches think I hate women?” — delivered with Che’s youngest-sibling-style pleading. He pulls the same thing a few times. “You ever seen a bear? I found out what to do … You have to make yourself really big and you gotta make a lot of noise, because bear won’t eat you if they think you’re retarded.” The audience giggles. “That’s not a nice word to say, I know, but I only said it ’cause I thought it would make you laugh. And it did.” He doesn’t come out of the moment well, exactly, but his ingratiation slips a knife in — to every person in the room.

An entertainer who wants to be liked? A joke-teller who goes for the laugh? Get out of here. Che’s not exactly the first to pander — his word. But he also has better, deeper stuff than that, and in Shame the Devil, he too briefly touches on it. His ease is his great gift; sometimes he drops thoughts into the listener’s brain that will move down slowly through mental layers. In the early 2010s at the much-missed, now-defunct variety show Gentrify, which used to happen every week at (the much-missed, now-defunct) UCB East, Che did a joke I can’t get out of my head: The funny thing about white liberals, I remember him saying, is they can get offended for people who aren’t even in the room. Sometimes my memory turns that joke one way, sometimes another, but every time it gets sharper — I use Che’s line to pare and shape my own thinking. Something from this special is probably also making its slow way through me, and I’ll only recognize it a few years later. I might wish he didn’t bury it in a pile of period yuks and they-yelled-at-me complaints, since they make that thought goddamn hard to pick out. But at least I trust that it’s there — sitting quietly on a stool in the dark of my mind.