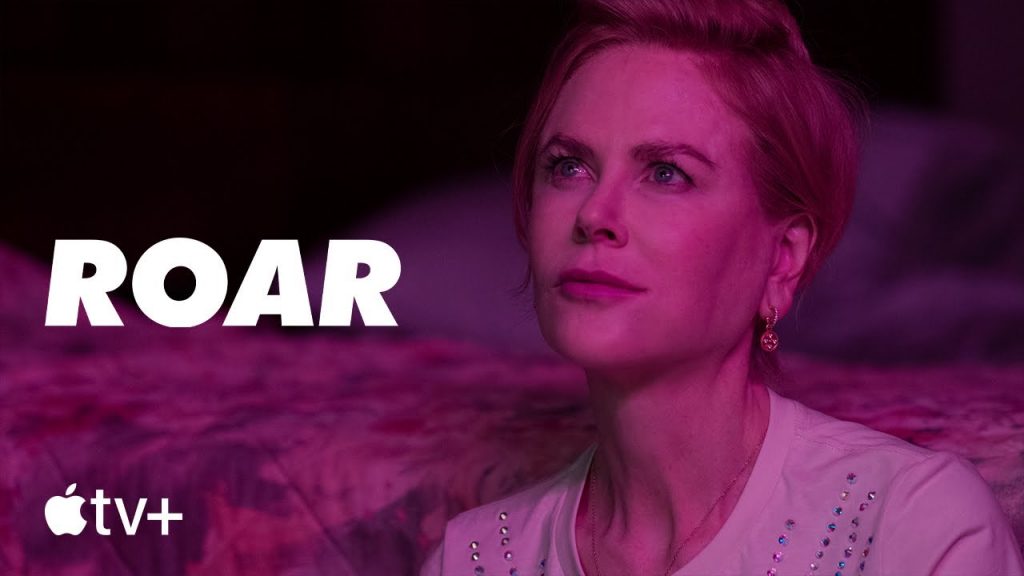 The worst part of “Roar” is also its most consistent. While every episode of Apple’s new anthology show tackles an entirely different story with a different cast to match, they each open with a neon graphic of a woman’s mouth screaming out of a blooming flower. With this image, “Roar” underlines its logline as a feminist scream of a series that, as based on Ceceila Ahern’s book of short stories, explores “what it means to be a woman today.” Watching its trailer, which leans heavily on wackier moments like Nicole Kidman shoving photographs down her throat, you’d be excused for assuming it’s an exaggerated comedy of girlboss errors. Watching the actual show, though, makes for a bit of a more scattered experience.

From Liz Flahive and Carly Mensch, “Roar” tells eight stories of eight women whose dissatisfaction with their situations — whether rooted in shame, guilt, fear, or some combination thereof — leads them to take drastic measures. This premise makes “Roar” a perfect fit for Flahive and Mensch, as anyone who watched their dearly departed Netflix series “GLOW” can attest. As per Ahern’s book, however, most of the characters’ narratives get a surrealist twist or metaphorical framework to drive home their main themes. Kidman’s episode, for example, has her eating photographs to experience the intoxicating rush of memories they inspire while taking care of her mother (Judy Davis), whose dementia is advancing faster than either care to admit. In “The Woman Who Was Kept on the Shelf,” “GLOW” star Betty Gilpin sits on a platform built by her rich husband (Daniel Dae Kim) to become a trophy of a wife (get it?). Some episodes handle the conceit better than others, but all are about this literal.

As can be expected from any series that hands the reins over to a new creative team with every chapter, “Roar” is uneven beyond its basic through-line. “The Woman Who Ate Photographs,” written by Flahive and directed by Kim Gehrig in Kidman’s native Australia, combines its fantastical elements with Kidman and Davis’ finely tuned, deeply human performances to echo something like “The Leftovers” in tone. (Let this be inspiration for Kidman, also an executive producer, to keep doing weirder projects, please.) “The Girl Who Loved Horses,” directed by So Yong Kim, takes on a Western period piece about two teen girls (Fivel Stewart and Kara Hayward) finding their place outside their fathers. “The Woman Who Returned Her Husband,” written by Vera Santamaria (“Pen15”) and directed by Quyen Tran, is the show’s funniest and most charming, episode thanks to Meera Syal’s deft comedic performance as a dissatisfied housewife, who dusts off her husband’s old warranty to exchange him for a better model.

Embracing another genre entirely is the show’s premiere. “The Woman Who Disappeared,” written by Janine Nabers (“Watchmen”) and directed by Channing Godfrey Peoples (“Miss Juneteenth”), this more chilling episode evokes an horror movie as white Hollywood executives (including an eerily calm Nick Kroll) erase a Black author (Issa Rae) from her own narrative, proving that their “Black Lives Matter” support runs about half an inch deep. Cynthia Erivo also gets a horror episode in “The Woman Who Found Bite Marks on Her Skin,” playing a working mother whose guilt starts to quite literally eat her alive. Even as Rae and Erivo make the most of their characters’ harrowing arcs, it does, unfortunately, feel telling that both “Roar” chapters starring Black women embrace fear and dread more than the others, in a way that Flahive and Mensch may not have wholly realized.)

So, yes, some of the show’s episodes end up much more nuanced than the opening credits’ blunt battle cry of “I am woman, hear me ‘Roar.’” Others, however, embrace that retrograde vibe to become something far more basic.

For one: while it’s encouraging to see Flahive and Mensch reunite with “GLOW” standouts Alison Brie and Chris Lowell in “The Woman Who Solved Her Own Murder,” not even the extremely charismatic Brie can sell this murder mystery, with an ending that stopped being shocking long ago, for better and for worse. For another, Halley Feiffer’s “The Woman Who Was Fed By a Duck” tees up an intriguingly risky tale of a lonely 30something (the always compelling Merritt Wever) dating a manipulative duck (voiced by Justin Kirk), but just ends up feeling like a familiar story about dating being hard. It’s also notable, and frankly disappointing, that all eight episodes focus on cis, straight women. If “Roar” is supposed to be a feminist show, which wave of feminism is it centering, anyway?

Sometimes, the series’ willingness to get strange backfires (see: Wever making eyes at a duck). Other times, a little goes a long way towards more compelling storytelling (see: Kidman losing herself in the reverie of a childhood photograph, eyes glazing over with fireworks that have long since burned out). In this respect, the MVPs of “Roar” just might be the casting directors, who found the actors who could not just handle this material, but find subtlety where there sometimes is none.