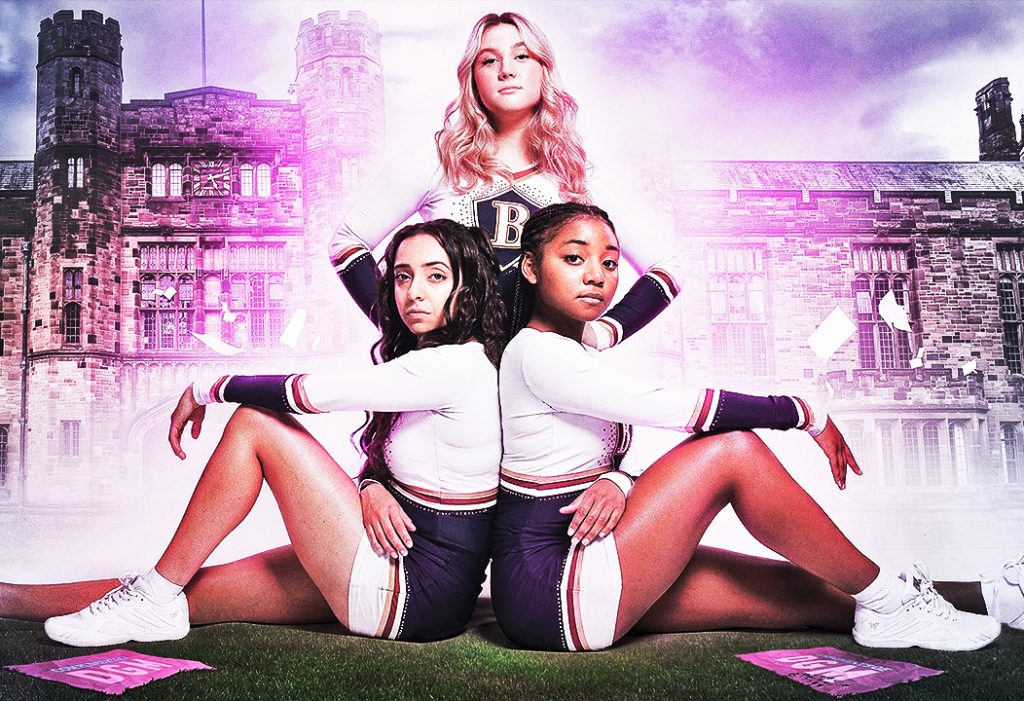 It’s been a couple of years since the original DGM group, that flushed out and tormented bullies of all stripes at Bannerman Independent School, have graduated, and the bullying has come back with a vengeance.

One sign is shown during a cheer practice, where a girl named May (Jessie Mae Alonzo) decides to quit, mainly because she’s leaving school. Clara Harris (Lashay Anderson), daughter of the cheer coach (Don Gilet), decides to drop her phone in May’s backpack with the voice recording on to see if she can get any insight. Embarrassed, she turns to her cheer buddies Grace Ellington (Amelia Brooks) and Rumi Joshi (Ashling O’Shea) to get the phone back. After their scheme to pluck the phone out of May’s bag works, they listen to the recordings. They’re too jumbled, so Rumi offers to clean them up.

The cleaned up recording reveals that May was getting terrifying, anonymous notes in her locker. Grace appeals to the principal, Ms. Carson (Kirsty Hoiles), but she says it’s too late. Grace changes her school president campaign speech to reflect her dedication to stop bullying in the school; most people applaud but cheer bully Viola (Kat Rooney) does not. There’s also a confrontation between Viola and Clara over the coach’s choice of Clara’s sister Leila (Renee Bailey) for the top of a formation.

The trio goes up to the roof of the school and wishes DGM were still around, especially after they get an anonymous note saying something will happen at the cheer presentation that night. When Leila, at the top of a formation, passes out and falls to the ground, the trio decide to form a new DGM and flush out the bully.

Both Get Even and Rebel Cheer Squad are based on Gretchen McNeil’s book series, so the creation of a new DGM wasn’t created out of whole cloth from a fever dream of BBC executives (both series debuted on the UK network’s iPlayer before coming to Netflix). But after the first episode, Rebel Cheer Squad doesn’t feel all that different than the original series. There are small differences, but it’s the same theme: A group of girls are going to anonymously go after Bannerman’s bullies, whether they be students or faculty.

What are the small differences? These girls are already friends, and they’re all on the cheer squad, whereas the original brought together a disparate group that were not necessarily friends. And the DGM is now three girls instead of four. Will their targets be different? Sure. It’ll be fun to see how this group manages to get even with the bullies at their school compared to the first group. But, to be honest, the show feels like it’s more of a continuation of Get Even than something different. If that’s your vibe, great. But most viewers likely got their fill during the original series.