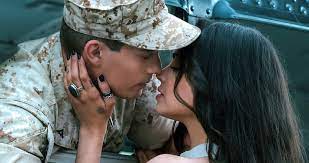 Perhaps, one day, somebody will make a film in which a hastily arranged marriage of convenience between two virtual strangers doesn’t blossom into real love, and instead more tensely culminates in mutual acrimony and cathartic divorce. Until then, those inclined can moon over drippy, dopey fantasies like “Purple Hearts,” an opposites-attract romance that — give or take an Iraq War backdrop and some current social-justice talking points — could have been made at any point in the last 70-odd years. Principally a vehicle for Disney-reared singer-actor Sofia Carson, as an independent-minded Latina singer-songwriter who marries a conservative Marine for insurance benefits, only for military tragedy to bring them closer together, this glossy but gloopy Netflix original is primarily out to serve its leading lady’s legions of fans, some of them perhaps young enough not to have seen it all before.

For those millions, director Elizabeth Allen Rosenbaum’s film acts as generous fan service, often pausing the storytelling entirely for music video-style performance interludes built around Carson’s own pleasant midtempo pop tunes, plus a couple of cannily rejigged covers. (Neil Diamond purists should consider themselves warned.) Away from the microphone, she’s a sparky enough presence, not heavily taxed by a character, Cassie, whose smattering of tattoos and progressive political credentials — Black Lives Matter and queer-rights flags hang from the balcony of her improbably spacious walk-up apartment in Oceanside — do the bare minimum to distinguish her from the archetypical Nicholas Sparks-style romantic heroine. Shame the script sells out Cassie’s initially spiky anti-military stance as soon as things get cozy with hunky commander hubby Luke (British dreamboat Nicholas Galitzine, from last year’s tween-targeted “Cinderella”), but that’s love and compromise for you.

At the outset, Cassie announces a firm no-soldiers dating rule, based largely on the rowdy, misogynistic behavior of the recruits who frequent the dive bar where she serves and sometimes sings. Tall, straight-backed Luke is more gentlemanly than his fellow Marines, but she’s unimpressed by his right-wing defense of the principles for which they stand: “You tweet about other people’s rights, but when it actually comes to fighting for those rights, you don’t want to do anything, because guns are mean,” he scolds her. “Do you have a Ph.D in mansplaining?” she counters. Screenwriters Kyle Jarrow and Liz W. Garcia’s idea of sparkling romantic banter more closely resembles a tetchy social media spat between anonymous strangers: Nevertheless, the battle lines are thus drawn.

Cupid intervenes via the unlikely routed of life-threatening disease and America’s broken healthcare system. When Cassie finds herself unable to afford her insulin prescription in a wake of a severe diabetic emergency, she hits on the idea of marrying a Marine to secure spousal medical insurance; when childhood friend Frankie (Chosen Jacobs), already otherwise betrothed, turns down her proposal, Luke steps up to the altar. Turns out he has his own pragmatic reasons for doing so, needing the benefits to pay off a menacing drug debt from his wilder pre-military youth. With mere days to go before he ships out to Iraq, they hastily wed, keeping the arrangement secret from their respective families, and feigning a whirlwind attraction before his military brethren — a court-martial, after all, awaits him should the ruse come to light.

Scarcely has she become a military bride than Cassie begins reaping less expected rewards from the situation: Her mawkish ballad written for the troops becomes a surprise viral sensation, vaulting her music career to another level. A more interesting film would query her swift, cynical trajectory from anti-military firebrand to someone who prefaces a song with a “this goes out to all you American heroes” dedication, but this is emphatically not that movie: Here, that’s simply affection gradually triumphing over skepticism, the heart over the head. Politically, meanwhile, “Purple Hearts” stays stringently loyal to all sides, cheering Cassie on in her sporadic right-on rants but also offering a gilded, ennobling portrait of Marine duty — even when heavily telegraphed tragedy strikes in action, and Luke returns to California a broken man.

Will their improvised marriage survive this unforeseen crisis? Will Luke walk again with his previous macho confidence? Will adorable getting-to-know-you dates over breakfast tacos paper over their vast differences in ideology and temperament? And will her meteoric musical rise continue entirely unaffected by her complicated personal life, almost as if it were a wholly isolated storyline? Sir yes sir, across the board — the only real uncertainty in “Purple Hearts” is just how few of Cassie’s more interesting principles she’ll be allowed to retain by the time she and Luke pledge their love to each other once more, with no subterfuge this time. (It helps that both these appealing, attractive people conveniently have no outside love interests to complicate matters.) “Where I come from, marriage is for love, and for life,” he warns her early on. She scoffs, but then she succumbs: A spouse, in this watchable but disappointingly old-fashioned wisp of a film, is just a soulmate you haven’t met yet.