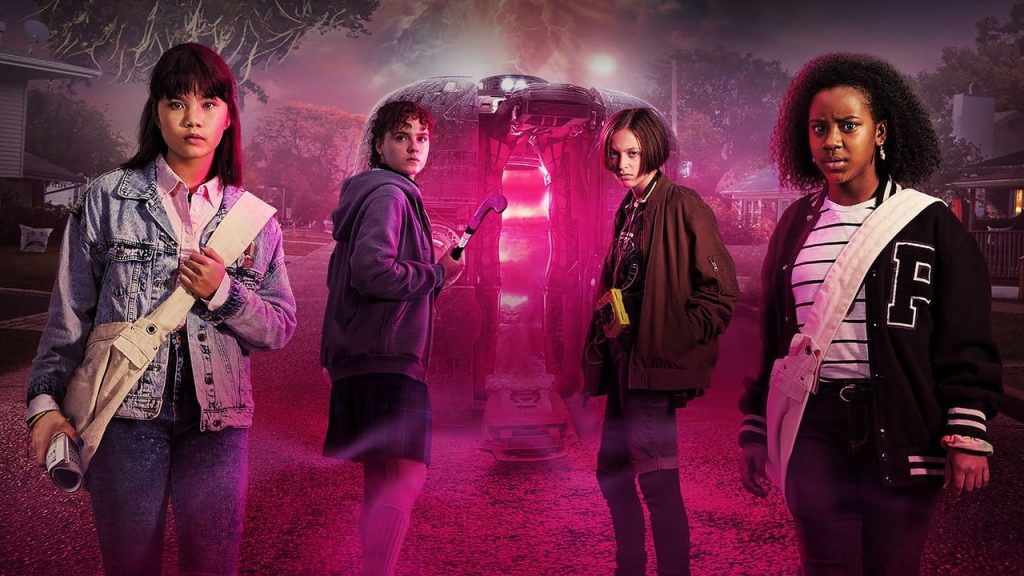 Let’s get this out of the way now: The comparisons “Paper Girls” will get to “Stranger Things” are inevitable, but not especially fair.

Yes, “Paper Girls” also opens in the 1980s with four 12-year-olds on bikes who end up tackling otherworldly forces way bigger than themselves. But by the middle of the first episode, “Paper Girls” — which was a comic book series before “Stranger Things” was a TV show, anyway — turns itself inside out to become something else entirely. Suddenly, what at first looked like yet another throwback Amblin-esque series reveals a more bittersweet lens, and harder science fiction heart.

As written by Brian K. Vaughan and illustrated by Cliff Chiang (both executive producers on this show), the original “Paper Girls” comics developed a devoted fanbase thanks to its sharp characterization, unsparing twists, and Chiang’s angular imagery rendered in fluorescent pinks and blues by colorist Matt Wilson. The Amazon adaptation, which premiered its first eight-episode season on July 29, picks and chooses its moments to follow suit. (In particular: the telltale pink that haunts the comics only does the same in the show at specific moments that signal when the real danger’s on its way.) Created by Stephany Folsom (“Toy Story 4”), and showrun by Christopher C. Rogers (“Halt and Catch Fire”), this version of “Paper Girls” embraces the adrenaline rush of a wild goose chase through time and space, but is often at its best in the quieter moments of human connection.

When the series kicks off on November 1, 1988 with the quartet taking on the dreaded post-Halloween paper route, Erin (Riley Lai Nelet) is simply “new girl” to the others, who in turn have only occasionally crossed each other’s paths. KJ (Fina Strazza) just wants to stay away from her rich parents’ house and expectations; Tiffany (Camryn Jones) is biding her time until she can get to MIT; and Mac (Sofia Rosinsky) inherited the job from her older brother to help support her family, even though they rarely support her back. When they all accidentally time travel into the future together, there’s nothing holding them together except fear and familiarity.

With the four leads barely knowing each other at the start of their journey, the show forces them to build their friendships from scratch. Forget “Stranger Things”; “Paper Girls” feels more like what might happen if a wormhole had sucked up The Breakfast Club members and spit them out into another decade (and not just because Rosinsky’s Mac, with her tough talk about needing smokes more than love, looks and sounds eerily like a mini Judd Nelson). Though to its credit, the show rarely loses sight of the fact that they’re neither small children nor full-fledged teenagers, but 12-year-old girls who are both smarter and less experienced than most of the adults — including their own grown-up selves — tend to realize.

Moving the story and their relationships with each other forward, while also establishing a detailed universe of underground rebels fighting an authoritarian regime through intersecting timelines, is a tall order. And yet “Paper Girls,” with its talented young cast and dedication to confronting the bigger questions raised by its premise, delivers more often than not.

It helps immensely that each of the four main actors is compelling in their own right, especially as their characters discover how their lives unfolded after 1988. When Jones and Nelet have the opportunity to square off directly with Tiffany and Erin’s older selves — played by Sekai Abeni and Ali Wong, respectively — they also get to dig into the show’s richer themes of expectation meeting reality, disappointment, and loss. (Wong and a twitchy Nate Corddry also indulge one of the season’s few slapstick scenes together, though they each largely end up playing against their more typical comedic types as the stakes get more and more dire.) Rosinsky ends up handling some of the season’s most and least subtle moments, but gets one of the its most poignant threads when Mac reconnects with her brother (Cliff Chamberlain). Strazza, meanwhile, must look more inward as KJ struggles against both her introverted instincts and a truth about herself that she’s not especially ready to confront.

Those who are tuning in to “Paper Girls” for the sci-fi mystery of it all might find themselves frustrated toward the middle of the season. Here, the show homes in on the girls confronting their insecurities, essentially pausing the urgency of the larger mystery and formidable agents — played by the always compelling Adina Porter and Jason Mantzoukas, in a rare and refreshing turn as a villain — hunting them down.

And, sure: there’s no denying that these episodes, which focus on the personal over the political implications of the overarching narrative, lose out on some of the series’ more potentially unique approach and aesthetics. But creating the connective tissue that binds the paper girls together is also crucial to laying the groundwork for what they go through, how they cope, and what’s to come. After all, there’s no use traveling through time if you don’t care about who you’re traveling with, and so “Paper Girls” does everything it can to make sure you do.