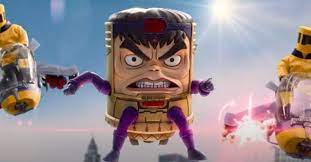 M.O.D.O.K. is Marvel by way of Robot Chicken. It’s filled with wall-to-wall jokes and visual gags, brought to life through innovative stop-motion techniques and by an all-star comedy cast. The 10-part series is MCU and comics-adjacent when it wants to rope in a few big Marvel names, but for the most part, it’s an original take on the iconic villain, voiced by comedian Patton Oswalt. The show, co-created by Oswalt and Jordan Blum (American Dad), discards the character’s bizarre comic baggage in favor of a brand-new origin and setting. It also ends up being a surprisingly effective character drama too.

WandaVision and The Falcon and the Winter Soldier may have been more straightforward, but M.O.D.O.K. is quite easily the best Marvel series of 2021 so far.The new streamlined origin leaves no room for George Tarleton, M.O.D.O.K.’s regular-shaped human identity before he was experimented on and turned into a huge-headed, tiny-limbed murder machine in a floating chair (the character’s name stands for Mental Organism Designed Only For Killing). This M.O.D.O.K. has always been M.O.D.O.K. The show opens with a fable-like flashback to his childhood home, with the character’s mother comforting her unusually proportioned son after he’s bullied at school. It’s a sweet little scene that also sets the stage for M.O.D.O.K.’s supervillainous future. “One day, that big, beautiful, womb-wrecking head of yours is going to change the world,” his mother assures him, but he internalizes this soothing advice with mustache-twirling ambition.

Fast-forward 35 years, and M.O.D.O.K. is the leader of A.I.M (Advanced Idea Mechanics), the brainchild of Aldrich Killian (Guy Pearce) in Iron Man 3. Here, the organization retains its comic incarnation: a factory of supervillainy populated by henchmen in yellow hazmat suits. M.O.D.O.K. leads their villainous plots by day — which often include battles with Iron Man (Jon Hamm) — but by night, he returns from A.I.M.’s mountainous lair to his home in the suburbs, where he lives with his wife Jodie (Aimee Garcia), a Mexican-American author and lifestyle vlogger, his tween son Lou (Ben Schwartz), a ball of energy and creativity, and his aloof teenage daughter Melissa (Melissa Fumero), who’s inherited her father’s unusual shape, and floats around in a bedazzled pink chair of her own.

The tug-of-war between these two settings, the classic domestic sitcom, and the more modern workplace comedy, is the perfect launching pad for the plot. At work, M.O.D.O.K. juggles a long-standing rivalry with fellow inventor Monica Rappaccini (Wendi McLendon-Covey) and the sweeping changes instituted by A.I.M.’s new corporate owners, the all-encompassing social media giant GRUMBL, who send their pestering, scarf-wearing Silicon Valley envoy Austin Van Der Sleet (Beck Bennett) to oversee the transition. At home, M.O.D.O.K. remains consumed by his career ambitions, and his desire to turn the world into a M.O.D.O.K.-themed utopia. He has little time for family, and the cracks in his home life have begun to show.

Oswalt is a delight as M.O.D.O.K., who speaks with the Shakespearean, fist-shaking cadence of a character from Jack Kirby’s Fourth World, no matter the occasion. He may be a genius inventor, but he’s incredibly oblivious as a father and husband, and his narcissism has led him to ignore the needs of his wife and kids. And so, despite all the workplace shenanigans and the show’s timey-wimey, dimension-hopping comic book plots, the season’s overarching story is about whether or not M.O.D.O.K. can finally learn to be there for Jodie, Lou, and Mellissa in the way that each of them truly needs. Even at its most “comic book-y,” the show’s sci-fi conceits all result in poignant character moments, like M.O.D.O.K. gazing upon important events from his past, or quite literally seeing the world through another character’s eyes.

That said, the show is also absurdly funny, in a rapid-fire manner where almost every line or story beat is something to laugh at. All ten episodes were directed by Robot Chicken’s Eric Towner and Alex Kramer, and nine of them manage to successfully blend the show’s humor and story across increasingly wackadoo scenarios, each of which centers M.O.D.O.K.’s relationship to a specific supporting character. Sadly, there’s one major dud in the season: its fourth episode, which features a rendezvous with a group of D-list comic villains without much story or plot momentum. Though what’s also unfortunate is that this entry has the series’ most amusing episode title: “If Saturday Be… For The Boys!”

The titles all follow this format, i.e. some mundane phrase delivered with classic comic book grandiosity, and each one is an accurate reflection of the way M.O.D.O.K. speaks. Other episode titles include “What Menace Doth the Mailman Deliver!” and “Tales from the Great Bar-Mitzvah War!”, the latter of which focuses on Lou’s upcoming Bar-Mitzvah (M.O.D.O.K. is Jewish in the series), which allows plenty of culturally specific gags, and a touching story about a strained father-son dynamic.

The show’s supporting cast adds some nice flavor to each episode. Jon Daly plays Super-Adaptoid, the comics’ Cosmic Cube-powered android, who appears here as the M.O.D.O.K. family’s resentful all-purpose home appliance. Sam Richardson’s Gary, an upbeat, happy-go-lucky A.I.M. employee, forms a nice counterfoil to the grumpy M.O.D.O.K. And a late-in-the-season appearance from Wonder Man (Nathan Fillion), the self-absorbed actor-superhero, adds a few unexpected wrinkles to M.O.D.O.K.’s domestic drama. The season also has a delightful overarching villain from M.O.D.O.K.’s past, from a time before he let familial commitments get in the way of world domination. This character further exacerbates M.O.D.O.K.’s work-family dilemma, though mentioning his identity would feel like a spoiler. It’s worth discovering for yourself.

Admittedly, the show doesn’t exactly feel like appointment-viewing, since the episodes are largely self-contained except for the last two or three. This works in the favor of viewers in the U.S. who’ll have access to all ten episodes simultaneously on Hulu, and can pace themselves accordingly. However, audiences elsewhere will have to catch the show week-to-week via the Star hub on Disney Plus, but the mere 25-minute runtime shouldn’t be too much of a hurdle for weekly digestion.

Although, what is perhaps most enticing about the series is the way it’s brought to life by Stoopid Buddy Stoodios, the animators responsible for Robot Chicken. There’s not only a stunning amount of detail in every frame — from real costume fabrics, to candy-colored blood, to a multitude of expressions on M.O.D.O.K.’s enormous face — but the framing itself has a hand-held quality that you don’t often see in stop-motion productions. That’s because the studio invented a programmable camera rig that combines frame-by-frame photography with the fluid motions of shooting on an iPhone. The result is classic Adult Swim, with its janky action-figure movements, as if it were shot in the cinéma verité documentary style of NBC’s The Office.

A farce with a beating heart, M.O.D.O.K. pulls from some ridiculous corners of Marvel lore, and feels like a deflation of the MCU’s increasingly self-serious cultural omnipresence. It’s Marvel parodying Marvel without the shared-universe oversight or the need to stick closely to established material, resulting in a focused family story that leaves off in a surprisingly emotional place.

With the stop-motion stylings of Robot Chicken, Marvel’s farcical M.O.D.O.K. series is a refreshing, mile-a-minute comic self-parody. Every line is a laugh, and Patton Oswalt is pitch-perfect as the iconic supervillain, whose Frankenstein origins are traded in for a streamlined saga of ego and ambition, blended with both a modern workplace comedy and a surprisingly moving family sitcom.