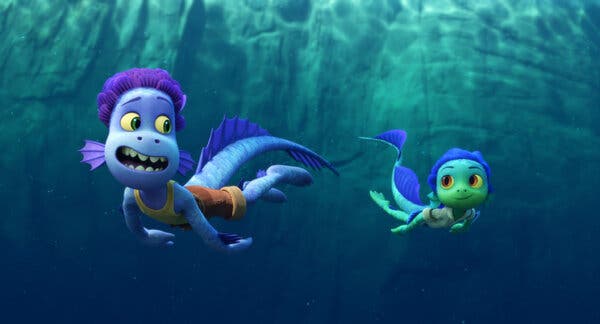 Italian animator Enrico Casarosa, who was nominated for an Oscar for his 2011 Pixar short film La Luna, incorporates his enchantment with the moon and stars in different ways in his first feature, Luca. This captivating coming-of-age tale of a young male sea creature curious about life on dry land shares plot foundations with The Little Mermaid, Splash and Studio Ghibli’s Ponyo. But its Mediterranean flavor and disarming lessons about the value of friendship and acceptance provide fresh charms, while the breathtaking beauty of the film’s environments both underwater and above the surface brings additional rewards. It’s not canonical Pixar, but it’s as sweet and satisfying as artisanal gelato on a summer afternoon.

Debuting on June 18 exclusively on Disney+, the film forgoes the more conceptual musings of last year’s Soul to return closer to a boys’ adventure narrative like that feature’s immediate predecessor, Onward. But that fantasy quest, with its echoes of Dungeons & Dragons role-play games, got bogged down in frantic over-plotting, while Luca’s comparative storybook simplicity, albeit with magical elements, should endear it to young audiences.

Luca (voiced by Jacob Tremblay) is a regular kid who just happens to have gills, a seahorse tail and a head of what looks like wavy coral. He lives with his family — caring but bossy mother Daniela (Maya Rudolph); more laid-back dad Lorenzo (Jim Gaffigan); and chill badass Grandma (Sandy Martin) — in the waters outside the fictional Italian Riviera fishing village Portorosso, where sea monsters hold a prominent place in local lore. In what seems a delightful nod from Casarosa to Finding Nemo, the opening shows Luca busy with his daily chores, herding a school of fish that bleat like sheep, and greeting other colorful members of the marine community. When Luca strays too far, his mother warns: “The curious fish gets caught.”

While the time frame is unspecified, the look of the village and the human characters’ clothing in Daniela Strijleva’s gorgeous production design clearly indicate the 1960s, as do the Italian pop hits of artists like Mina, Gianni Morandi and Rita Pavone, sprinkled in among Dan Romer’s gentle melodic score. A quick glimpse of a film still of Marcello Mastroianni also evokes the era.

When Luca starts finding objects lost from fishing boats — an alarm clock, a playing card, a gramophone — his eagerness to explore above the surface gets the better of him. His pluck is bolstered by a new friend, Alberto (Jack Dylan Grazer), whose experience with amphibious transitions between land and sea modes helps Luca through the bumpy initial stages of learning to walk upright. Alberto lives in the ruins of a stone tower that he has filled with found treasures.

The one that most captures Luca’s dreamer imagination is a metal sign proclaiming, “Vespa is freedom,” advertising the popular moped. That instant obsession yields one of a handful of lovely fantasy sequences, in which Luca and Alberto zoom through sun-kissed fields where wild Vespas frolic amid the yellow rapeseed flowers; from there, they fly up into the heavens where the stars are constellations of fish.

With such distractions keeping Luca above the surface and away from home, disciplinarian Daniela decides he needs to be sent to stay with creepy Uncle Ugo (Sacha Baron Cohen in a funny cameo), a deep sea-dwelling translucent glow-fish, for the rest of the summer. But Luca rebels and runs off with Alberto to “the human town,” where the big challenge is to stay dry long enough to pass for real boys and keep their aquatic forms undetected. Rain is not their friend.

They have a hostile encounter with preening bully Ercole Visconti (Saverio Raimondo), who doesn’t appreciate outsiders but loves his gleaming red Vespa more than life itself. Ercole never tires of boasting of his repeat wins of the Portorosso Cup, an annual triathlon event comprising swimming, pasta consumption and a final bicycle leg. He’s also relentless in his mockery of Giulia (Emma Berman), a tomboy fisherman’s daughter who has continually failed in her attempts to beat Ercole and end his “reign of terror.” But when Luca and Alberto join her to form an underdog team, Giulia approaches the competition with new spirit.

The script by Jesse Andrews (Me and Earl and the Dying Girl) and Mike Jones (Soul), like all the best Pixar movies, laces touching life lessons and delicate helpings of sentiment into what’s essentially a caper. While Luca’s worried parents venture onto land to track down their runaway son, Giulia’s burly fisherman dad (Marco Barricelli) more or less adopts them after they prove unexpectedly savvy in finding the best spot to fish. This turns out to be emotionally uplifting for Alberto especially, who hides the hurt of abandonment beneath his chipper bravado.

Luca’s quaint sea-creature interpretation of the night sky prompts Giulia to introduce him to a telescope and her school textbook on the universe, which feeds his hunger for knowledge. The story’s outcome — when the boys’ inevitable exposure as feared and reviled sea monsters makes them vulnerable to Ercole’s harpoon — serves as a gratifying teaching moment for kids about being open to otherness rather than rejecting it based on old prejudices and superstitions. And Luca’s display of loyalty and courage fills his parents with a pride they perhaps have never before shown. The movie’s smattering of Italian language also provides welcome cultural exposure for young audiences.

The voice cast is solid down the line. Young actors Tremblay, Grazer and Berman make an engaging trio, capturing the giddy excitement of fast friendships in the preteen years; Rudolph and Gaffigan deploy their well-honed comedy chops with deft understatement; Martin makes a droll impression whenever she weighs in as a blowsy grandma with street-smart secrets; and Raimondo is suitably obnoxious as the arrogant showoff, begging for his comeuppance. Fans of Baron Cohen should hang around for his amusing reappearance in a post-credits sequence.

But the real magic of Luca is its visuals. The character designs are appealing both in the marine world and on land, and the richness of the settings in both realms is a constant source of pleasure. The play of light on the gloriously blue water’s surface is almost photorealistic at times, while a sunset spreading its orange glow over rocks on the shoreline makes you yearn to be there. Likewise, the town, with its terracotta walls absorbing the summertime heat, lines of crisp laundry strung between apartment buildings, people strolling and kids playing in the central piazza, and old women staking ownership of regular spots from which to survey the passing traffic. The lush green surrounding countryside provides yet more eye-popping splendor.

The distinctions separating a Pixar creation from a Disney animated feature seem to be blurring in cases like this, but Casarosa has a winning knack for folding the wonder of fairy tales into the joys of old-fashioned storytelling. The Genoa native’s obvious deep-rooted affection for life in simpler times on Italy’s northwest coast gives the movie a warming injection of real heart.