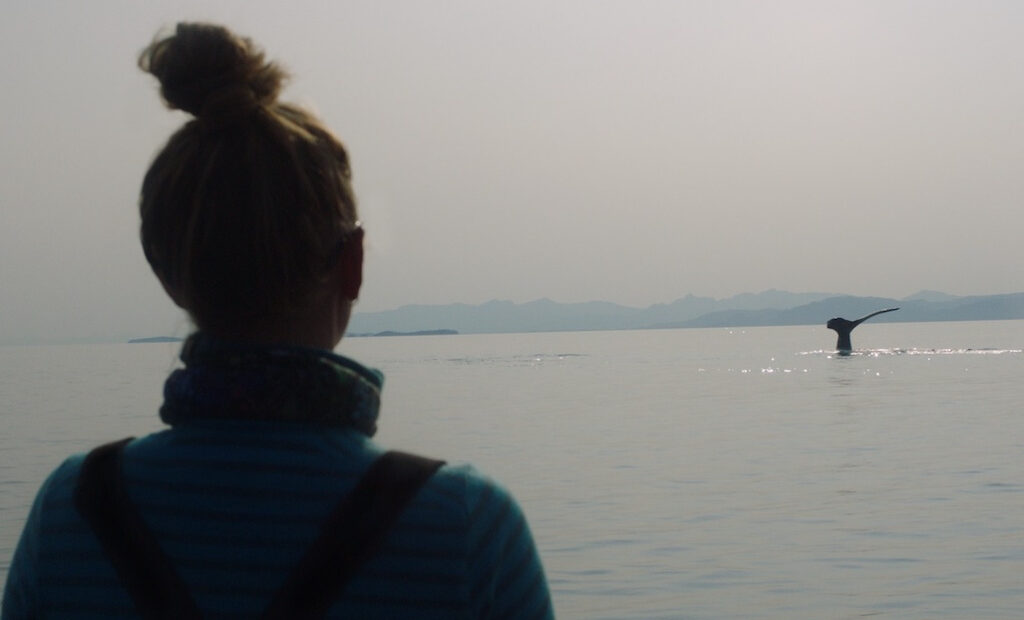 Anybody who’s seen Star Trek IV: The Voyage Home, whose plot involves a malevolent alien species that only speaks in whale song, can tell you that humpback whales are intelligent creatures with complex communication. The scientists at the center of Drew Xanthopoulos’s Fathom, acoustic ecologist Michelle Fournet and bioacoustics specialist Ellen Garland, aren’t able to mind-meld with their subjects like Star Trek’s Spock, but they’re still trying to get inside whales’ heads, albeit via an arguably more traditional route: by listening to them. Paralleling the two researchers’ fieldwork on the meaning and transmission of whale calls, Fathom proves to be less a comprehensive documentary about marine life than a philosophical piece about the extent and limits of human knowledge.

That means that the audience doesn’t get many glorious underwater shots of humpback whales on their migratory journeys, or an authoritative voiceover dramatizing the day-to-day survival of the endangered species. Instead, we’re invited to try to, well, fathom their existence based on available evidence and the accumulated knowledge of the scientists whose efforts we follow. In lieu of being given any spurious immediate access to the whales, we’re made to feel, as Garland and Fournet do, how distant and impenetrable the underwater world of these creatures can seem. Xanthopoulos withholds the familiar low-angle shot of a mother humpback and her offspring languidly making their way through a dark-blue ocean until near the end of the documentary, when we’ve already grown used to thinking of the whales primarily as acoustic entities only occasionally glimpsed on the horizon.

“They remind me of brontosauruses,” says Natalie Mastick, Fournet’s research assistant, as she listens to a recording of the animals, evoking an image of ancient, unknowable beasts. Mastick probably doesn’t realize that humpback whales exhaling through their blowholes were among the animal calls that contributed to Jurassic Park’s dinosaur vocalizations. Nevertheless, this moment resonates because Fathom gestures toward another prominent tie between whales and Hollywood speculations around radically “other” lifeforms. When Garland and Fournet discuss the structure and meaning of whale calls, Fathom illustrates their words with an animation that transforms the recorded wave forms into inky, undulating rings that recall the time-upending form of writing practiced by the aliens in Denis Villeneuve’s Arrival.

Like the mysterious visitors in Villeneuve’s sci-fi film, whales’ form of communication seems to imply that they inhabit time differently than humans: Garland points out that because sound travels so well in the ocean, a whale might hear a song from hundreds of miles away at the same time that it hears the squeaks, clicks, and groans of its mate, meaning, as she puts it, that they exist both in the past and present. But that humans can also simultaneously receive sensory information from both the past and present—if only with the help of implements like radio, television, and the movies—is something that Fathom stops just short of exploring.

Indeed, there are moments when you may feel as if Xantholoulos could push harder on the film’s philosophical implications. At one point, Garland speaks of the “global system of culture and communication” that whales have had since they evolved 40 million years ago. In light of her own earlier observation that humans always find something about themselves when looking at nature, you may find yourself wondering about the clear analogy being drawn between the millennia-old networks that bind communities of whales and the global media networks that have emerged in modernity. Is technology replicating nature, or are we projecting our own current communication paradigms onto the function of whale song?

It’s a logical question to ask of Fathom, since its approach is epistemological. The film distinguishes itself from other nature docs by focusing on the labor of scientists attempting to gain knowledge of an animal world rather than treating this access as a given. Instead of virtually hobnobbing with the cetaceans, we mostly see read-outs, sensors draped from buoys, and the regimented procedures for tracking and logging whale movements. This approach also involves diving into the lives of the scientists, as we get personal moments between Garland and her husband ahead of her departing for her weeks-long work in the field and of Fournet bonding with her research assistants while conducting research in remote Alaska.

This focus on the middle ground between human and whale worlds, the tools and techniques that may someday facilitate true communication and understanding, paves the way for the film to conduct an exploration of interspecies relations that’s a smidgeon more imaginative, perhaps slightly weirder, and maybe a bit less dry. In connecting themselves across networks that defy space and time, are humans only becoming more whale-like? However intriguing Fathom’s implications often are, that’s not quite the journey Xanthopoulos takes us on.