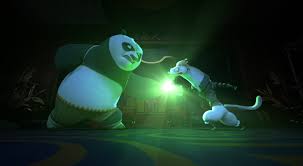 After a failed attempt to stop a gang of weasels from stealing the WuGao Gauntlet goes bad, Po’s reputation is destroyed and he is stripped of his status as Dragon Master. Now he must go on a quest to recover the gauntlet and restore his reputation, gaining help from a new character named Luthera, a female bear who is a knight from the land of. Landreth who is also after the weasels, Klaus and Veruca, coming all the way from England by order of the Queen.

Okay, as a fan of the Kung Fu Panda movies, even I have to ask what the purpose of this series is other than to milk money off a classic franchise whose third movie gave Po’s story a great ending? Here, the first episode basically puts Po’s character through character assassination, as he is devoid of the power and character development he got throughout the movies and nerfed to the point where he cannot defeat Landreth. I mean, really, he has gone up against evil threats like Tai Lung and Kai, but he is easily defeated by a female knight who does not have supernatural powers or kung fu training? Also, he is only in this to restore his title and honor, which is way off character, as Po is portrayed as a good-hearted panda in the movies.

Also, on the note of Landreth, she feels like she does not belong in the Kung Fu Panda series, as being a knight and all, it makes her look like she walked into the wrong cartoon. She’s basically a Mary sue, as she seems to be more of the hero while Po is somewhat demoted to comic relief (plus seeing her makes me think this is the result of turning Astrid from How to Train Your Dragon into a Kung Fu Panda character), and feels like this show was originally going to be a new IP before some Dreamworks big wig decided to slap the Kung Fu Panda name and its hero into it, which shows as other than Po and Mr. Ping, his adopted father, no other character from the movies or past series make an appearance. No Shifu, no Furious Five, not even the four pandas introduced in Paws of Destiny (which was a better show that continued the story compared to this cheap cash grab).

Also, the writing is so horrible, as the stories for the episodes sound like they were written by people who either never watched the movies or didn’t care about continuity, as it basically replaces Po with Landreth as the main hero (and making her a loner who attacks Po for any misunderstanding), and the weasels are good villains, although the WuGao Gauntlet, one of the four McGuffins of this entire series, sounds like Dreamworks decided to rip off the Infinity Gauntlet from the MCU. Also, the animation feels like it was made on a Playstation 2, as it is not exciting.

Now, I get this was made for kids, but let me tell you, kids deserve better cartoons than this cheap attempt to continue milking money off a franchise that had a perfect ending. The only good thing is Jack Black returning to voice Po, but sadly, not even the wonder boy of Tenacious D can use his power of rock to save this spin off from the mucky muck of horrible movie-based shows. If this had just been about Landreth and her quest to stop the weasels from gathering the gauntlet and the other three weapons, without any connection to the Kung Fu Panda universe, then Dreamworks could have had a fresh new IP. But with character derailment, bad writing, dated animation, and lack of returning characters, Kung Fu Panda: The Dragon is nothing but a cheap, horribly written attempt to continue to milk money off a franchise that should have ended with Kung Fu Panda 3, which was already the perfect way to end Po’s story. Avoid this even if you are a fan of the movies.