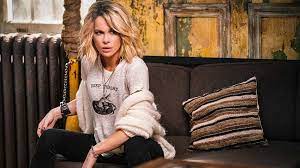 What Jolt lacks in originality and subtlety it at least somewhat makes up for in verve. The sardonic action comedy, starring Kate Beckinsale and Stanley Tucci, follows the adventures of a revenge-seeking woman suffering from debilitating anger-management issues. Directed by Tanya Wexler (Hysteria), the predictably plotted genre flick is best suited for viewers who don’t mind exchanging an engrossing narrative for heavy doses of body slamming, building explosions and car chases.

Lindy (Kate Beckinsale) has never been normal. As a young girl, the film’s efficient opening voiceover tells us, she struggled to manage her fury in the face of injustice. If a boy snatched her piece of cake or bullied her, Lindy would be quick to retaliate — shoving her peers’ head into desserts or hitting them with a bat. Her parents, tormented by their own issues, found her uncontrollable and eventually sent Lindy to a facility, where she began her life as a lab rat. She was prodded and probed, evaluated and tested. Her condition — aptly named intermittent explosive disorder — interested the scientists and researchers around her.

Fast forward a couple of decades and Lindy, now an adult, lives a somewhat normal life. She has — well, had — a job as a bouncer (until she was fired), regularly sees her psychiatrist, Dr. Munchin (Stanley Tucci), has an apartment furnished with plastic cutlery and can control her anger with a specially made device that sends jolts of electricity through her body at the click of a button. Oh, and she’s even got a hot date with a nice, normal man named Justin (Jai Courtney).

Their first meeting ends before it really begins. Lindy loses her temper with the waitress and body slams the woman in the bathroom before bolting out of the restaurant. But Justin doesn’t seem to mind her erratic behavior, and in fact, on their second date, tells her in an eye-roll-inducing way that he’s not afraid. Lindy, who’s spent most of her life being a loner, immediately takes to Justin, and the endorphins of an early-stage crush even help her manage her flashes of pique.

The temporary euphoria comes to a sudden halt when police find Justin dead right before the couple’s third date — just one of several dramatic twists throughout this perplexing film. At the police station, Detectives Vicar (Bobby Cannavale) and Nevin (Laverne Cox) interrogate Lindy about Justin, and their questions lead to the realization that she never really knew the man. That lack of familiarity doesn’t stop her from trying to find his murderer and avenge his death.

Jolt is not a terrible film, which is certainly not to say it’s good. Its over-reliance on gimmicks to elicit unearned viewer emotions often makes it feel cheap. (If anything, the soft piano music playing as Lindy and Justin walk along the pier of their unnamed city, and the high-contrast mood lighting during their sex scenes, gave me secondhand embarrassment more than anything else. Not once did I believe these two were falling in love.)

The screenplay by Scott Wascha also leaves more questions than it answers. Don’t get me wrong — I’m not opposed to watching Beckinsale kick ass or Tucci deliver wry lines with finesse, but the inconsistencies pile up in frustrating fashion. It’s not entirely clear how or when Lindy’s temper will flare, and while that might be a narrative tactic intended to emphasize its relative uncontrollability, it ultimately feels sloppy.

The film’s considerable amount of action will, for many viewers, make it easier to overlook these shortcomings. As Lindy gets closer to figuring out who murdered her lover, she finds herself in increasingly dangerous situations. Not only does she have to face the mysterious person behind Justin’s death, but now she’s a suspect in the police investigation, too. Jolt delivers some thrilling antics: Lindy steals a car for a high-speed chase scene with the police, scales buildings, beats up professional fighters, blows up her apartment and more.

Wexler opts for close-ups to showcase the range of Lindy’s anger and choppy jump cuts to mimic the disorienting nature of her condition. The fight scenes are snappy, brutal and efficient.

By the end of Jolt, I found myself haunted by the nagging question, “What, exactly, did I just watch?” Part of me resented the premise that this woman with wild rage would be tempered by a man — a notion that feels at odds with the self-consciously feminist lines sprinkled throughout the movie. Eventually, I stopped thinking about it, though. The film doesn’t take itself too seriously; I decided I wouldn’t either.