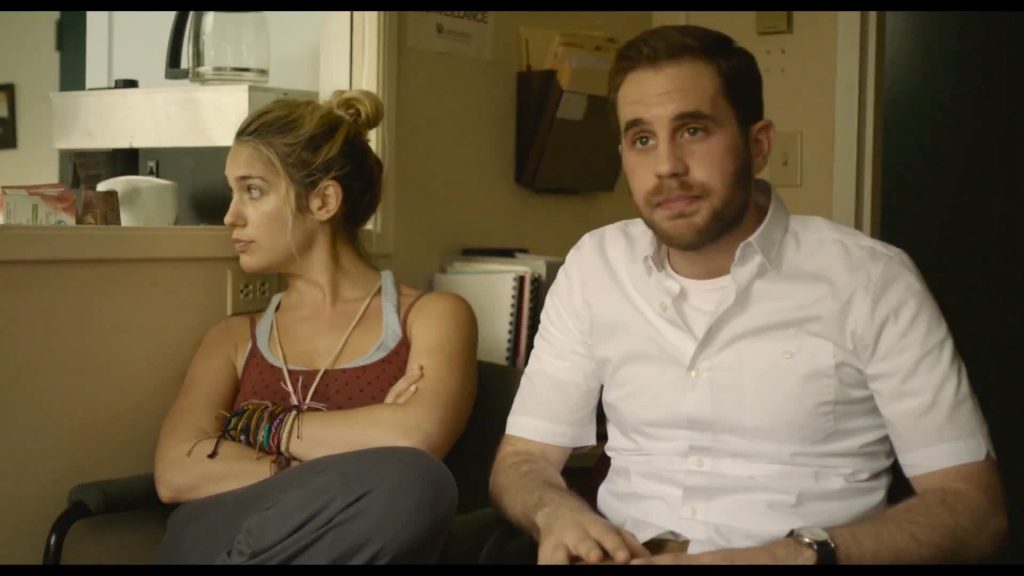 Ben Platt finds himself a long way from the Dear Evan Hansen Broadway spotlight as an aspiring young novelist attempting to deal with the fallout from his sister’s latest setback with mental illness in Peter Sattler’s sophomore feature, Broken Diamonds. This sensitive, compact indie drama represents an abrupt departure from the gritty military tension of Camp X-Ray, Sattler’s debut starring Kristen Stewart as an Army private stationed at Guantanamo Bay.

In tactfully tackling some of the often-sensationalized issues surrounding schizophrenia, Sattler and screenwriter Steve Waverly craft a topical and emotionally accessible film that should easily connect with sympathetic viewers, particularly those familiar with the debilitating effects of chronic mental health issues.

Tony and Grammy award-winner Platt, who’s reprising the title role for Stephen Chbosky’s Universal Pictures adaptation of Dear Evan Hanson (announced as the Toronto fest opener this week), plays restaurant waiter Scott, who has big plans to relocate to Paris and finally write his debut novel. As he begins finalizing details for his departure, Scott’s stepmother Cookie (Yvette Nicole Brown) calls with devastating news: His father has unexpectedly passed away in his sleep. Attempting to overcome a pervasive sense of ambivalence over the death of his sometimes-distant dad, Scott immediately contacts his schizophrenic older sister Cindy (Lola Kirke), who lives at a nearby residential care facility.

The film’s initially uneven tone sees Sattler and Waverly briefly stumble by injecting incongruously weak humor into early scenes of inevitable sibling conflict between Scott and Cindy. While the filmmakers’ inclination to avoid surrendering the narrative to the darker side of mental illness may be admirable, periodic flashbacks to the siblings’ childhood, dominated by Cindy’s worsening psychological state and their father’s stern parenting style, swiftly shift the tone toward more intense character drama.

Kirke plays Cindy as an addled, contrarian adult child whose incessantly roiled state of mind prevents her from fully absorbing her dad’s passing. Instead, she obsessively pursues a petty vendetta against a neighbor, leading to a physical altercation and her expulsion from the mental health facility. With nowhere else to go, Cindy reluctantly moves in with Scott, who gets stuck caring for her until she can find new housing. Separated from her familiar routine and frequently skipping her antipsychotic meds, Cindy begins behaving erratically, threatening her own safety and forcing Scott to reassess his plans for Paris.

Rather than sensationalizing Cindy’s affliction with violent incidents or melodramatic confrontations, Sattler strategically reveals some of her more obviously unbalanced episodes with empathy and tact. At a party hosted by an old high school friend for instance, intense questioning by former classmates and crushes alike about her ten-year absence from the social scene leads her to reflexively drop to the floor in yoga contortions as her old classmates look on bewildered. More severe symptoms of psychosis are only hinted at though, as when Cindy’s caseworker tells Scott that his sister hears voices and imagines nonexistent romantic interests, suggesting she may even be suicidal.

Sattler’s sympathetic perspective on Cindy’s psychological challenges comes at the expense of developing some key plot points however, in particular neglecting to include any scenes featuring Scott actually writing or researching his planned novel that’s the impetus for his trip to Paris. As long as he isn’t expected to fill random holes in the script though, Platt is well suited to the role of a concerned and conflicted young man attempting to reconcile his personal ambitions with unpredictable family dynamics.

Platt occasionally struggles to grasp these more authentic emotional moments and without a musical number at the ready, his studied reactions to Cindy’s frequent meltdowns can come across as a bit forced, although he does make the family relationship completely believable. Despite her talents, Brown doesn’t get much to do here as the widowed stepmother, gradually losing touch with Scott and Cindy after their dad’s death.

Constrained by her character’s psychological condition, Kirke’s performance isn’t as substantive as more memorable turns in the likes of Gone Girl or the entertainingly enigmatic Gemini, although she clearly grasps Cindy’s confusion over her illness and shows a knack for exhibiting an often-repellent antisocial attitude.

Although Sattler’s well-meaning approach tends to soft-pedal the adverse effects of mental health issues, it’s a perspective that contextualizes and humanizes those affected as relatable and deserving respect.