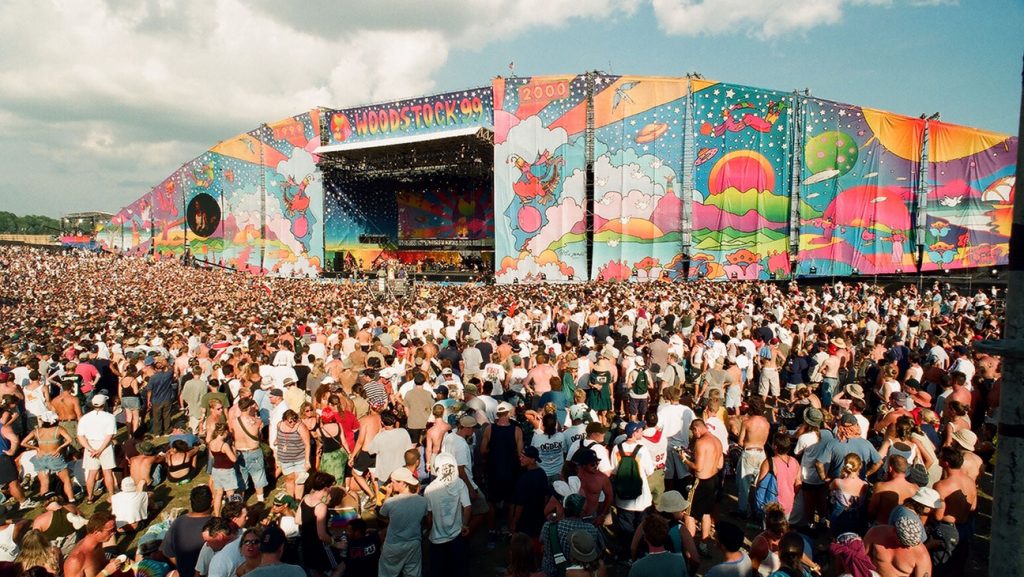 HBO’s documentary Woodstock 99: Peace, Love and Rage has a lot on its mind when it comes to the debacle of the 1999 music festival, with one of its most provocative ideas tied to the dangers not of forgetting history, but of viewing history through a nostalgia-skewed lens.

This alone would make the doc plenty timely and perceptive, even if Garret Price’s film wasn’t also about the dangers of pandering to angry young white men without considering consequences. I have problems with some of the ways Price tells his story and some of the access he was able to get, but his documentary is more thoughtful than it necessarily needed to be. And if there was an audience out there for multiple documentaries about a disastrous music festival that never took place, there ought to be some interest in this actual debacle that has been somewhat lost to time.

In my own memory, for example, the 1994 Woodstock and the 1999 Woodstock have blurred into a single event. Was Woodstock 1994 actually the innocuous success that Price depicts or does the comparison to 1999 come with overpriced beer goggles? And why does it matter? Well, it matters because Price wants to make it clear that the original, classic flavor Woodstock has been replaced in the collective consciousness by Michael Wadleigh’s 1970 documentary — and not even the full documentary, but a clip reel of peace, love and impeccably preserved musical superstars. So when 1999 Woodstock organizers tried to replicate the original, they attempted to copy a Woodstock that never existed and, in aspiring to mythology, were left with a badly organized, ill-fated monstrosity, which co-founder Michael Lang and co-promoter John Scher still can’t recognize today.

In Price’s documentary, which takes a day-by-day look at the unfolding storm, viewers are left with several possible versions of cause-and-effect.

For Lang and Scher, Woodstock 1999 soured because of MTV, which took over the proceedings and made a lovefest into a commercial sinkhole. They blame artists like Limp Bizkit for inflaming tensions and, in surely the documentary’s most repugnant moment, Scher blames the festival’s female attendees for a rash of largely underreported sexual assaults.

For Price and his cast of experts, the truth was vastly more complicated. MTV was part of an epoch of changing musical tastes in the middle of a decade marked by economic expansion and wildly shifting perspectives on morality; everything from the rise of nu metal to the proliferation of Girls Gone Wild contributed to a generation that was rebelling without a cause — and, in the case of one long July weekend, to anarchy.

Price has a ton of footage to work with, mixing MTV and pay-per-view festival coverage with behind-the-scenes and home movie footage. It captures snippets of the performances themselves and the increasingly repugnant conditions as the festival progressed. Unlike the exceptional Summer of Soul, this isn’t a documentary you should check out for the thrill of seeing acts like DMX, The Offspring, Creed or Alanis Morissette at their collective peaks. But it definitely shows how nightmarish it must have been to be in the middle of Fred Durst goading fans to break stuff, DMX doing a call-and-response with a predominantly white crowd on “My N—s” or the Red Hot Chili Peppers ignoring requests to de-escalate a fire-setting crowd with an encore of “Fire.”

It’s no surprise, I suppose, that Woodstock 1999 performers like Durst and Anthony Kiedis aren’t talking heads here. Instead, you get Jewel and Moby recalling when they realized something was wrong with the atmosphere and Korn’s Jonathan Davis admitting how sour it was, while at the same time chafing at accusations that the violence and unrest were caused by any of the artists.

More of the documentary is a mixture of attendees and journalists/culture observers. The festival-goers recount their initially innocent memories of the festival and their growing awareness of the unrest, stories that range from the grossness of the venue’s shower and toilet facilities to the terror of being in the middle of a mosh pit with increasingly drunk, increasingly angry, increasingly unrestrained peers. Some of the stories are restricted to semi-comic misadventures and some are tragic.

The journalists/cultural observers are an interesting mix. Wesley Morris gives a brilliant 30,000-foot overview, Steven Hyden gets a bit closer to the ground with his particular musical expertise and Maureen Callahan mostly gets increasingly and justifiably angry, especially when she’s placed after Scher’s victim-blaming for the festival’s pervasive misogyny. Nobody from the high-level MTV brass is on camera, which is a big gap given how consistently MTV is ridiculed here, but Dave Holmes and Carson Daly offer smart and harrowing reflections.

MTV brass and notorious performers are far from the only interview absences. With Lang coming across as dreamily oblivious and Scher as willfully obstinate, there’s nobody featured here with any sort of administrative oversight, nobody capable of weighing in on decisions like a lineup with only three main-stage female acts or hiring a security force of glorified volunteers who, in many cases, took a three-hour class, entered the venue with their credentials and disappeared. Because Fyre Festival never happened, those two Fyre Festival documentaries are exclusively a chronicle of bad decisions and questionable motivations. Woodstock 99: Peace, Love and Rage lacks organizers able to provide motivation or explanation, which works as an illustration of a problem, even if the inability to get any clear-eyed reflections is, in some cases, infuriating.

I’d be curious to hear Price’s justification for making a documentary that condemns the objectification of female attendees and is rightly repulsed by Scher’s comments — “I am critical of the hundreds of women that were walking around with no clothes on and expecting not to be touched,” Scher says — and is, at the same time, an endless clip reel of exposed breasts. If Woodstock and the MTV/PPV cameras were exploiting these women — and they were — Price could have made that point with one-tenth the footage and without re-exploiting them himself.

It’s an approach that’s completely preventable and really distracts from many of the documentary’s strong points about audience entitlement, toxic masculinity and very stupid festival planning. You can see in Woodstock 1999 the seeds of the Nazi march in Charlottesville, Virginia, the Capitol insurrection and two decades of queasy imagery.

Woodstock 99: Peace, Love and Rage is the first entry in HBO’s new Bill Simmons-produced documentaries branded as Music Box, and it’s a very promising start. Simmons helped conceive ESPN’s 30 for 30 as a showcase for in-depth explorations of underreported sports stories, and the franchise, which I still love, has strayed from the specificity of those early docs since he left. I’d note that a lot of the demo that Woodstock 99: Peace, Love and Rage is criticizing is the same demo that has helped empower Simmons over the years, but a few problematic aesthetic choices aside, it’s mostly unflinching. I’m already looking forward to seeing what this brand does with subsequent films focused on DMX, Kenny G and more.