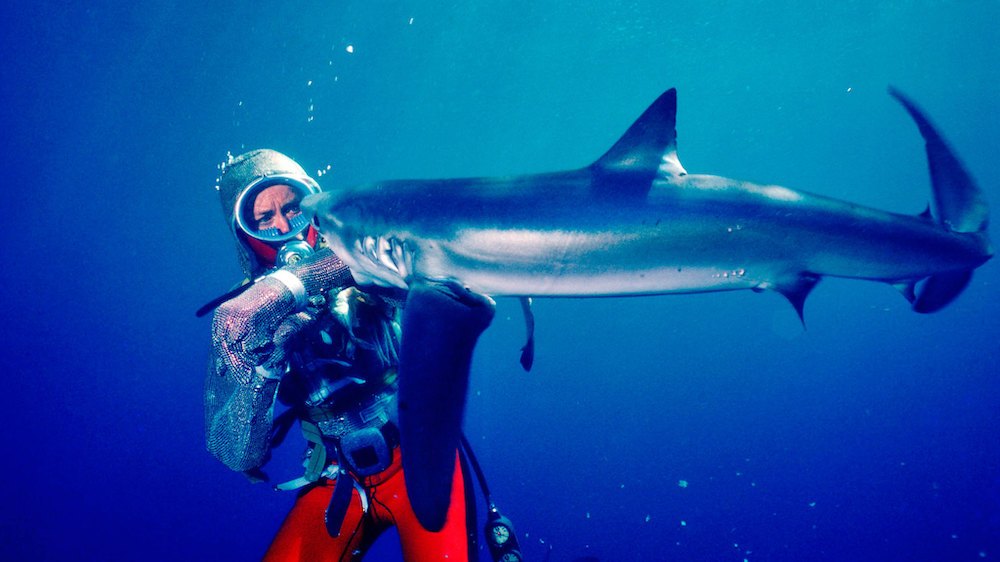 Adaredevil activity that for most would be considered the stuff of nightmares has, for diver and marine conservationist Valerie Taylor, been a lifelong passion. Dispelling myths and challenging preconceptions that humankind has of the ocean’s ancient selachian inhabitants, Sally Aitken’s Playing with Sharks is a loving biography of an indomitable, fearless pioneer and activist.

“Maybe I’m a bit funny, actually,” muses Valerie before heading off on another diving trip to Fiji. At 85 years old, her bright eyes, humour and enthusiasm for suiting up – in flamingo pink! – to visit old friends under the sea, remain dazzling and undiminished. There’s a self-deprecating playfulness, but earnestness, to all that Taylor recalls in Aitken’s film and ninety minutes in her company is time very well spent. Tongue in cheek remarks such as this may acknowledge that her life’s obsession has been an unusual one, but her ongoing defiance and conviction is stirring.

From her New South Wales home, we are transported back to the 1950s and first inklings of a career. Having battled and overcome polio, black and white underwater footage of Valerie spearfishing with great skill shows the knack she had for a life in the water. The swashbuckling stories of Huckleberry Finn, Robinson Crusoe et al, read during her convalescence, and an interest in the “alien world” beneath the waves would be all the inspiration she needed. There’s no doubting that in a male-dominated sport such as spearfishing, her gender and beauty drew attention.

Going against the grain of settling down, having kids and playing house, when Valerie met and married fellow champion and photographer, Ron Taylor, the world was – quite literally – their oyster. But what to do and how to make ends meet with their skills and enthusiasm for a life aquatic? The realisation that the hitherto common practise of killing and dissecting sharks to learn about them was counterproductive and ultimately, murderous. And so began decades of “only shooting them with cameras,” says Valerie. Consulting on documentary films such as Peter Gimble’s 1971 Blue Water, White Death, and then, infamously, Jaws, meant that Ron and Valerie were go-to experts.

However, perhaps the greatest challenge of their lives came when, in reaction to seeing Spielberg’s blockbuster hit, people began hunting sharks. The Taylors campaigned and educated people the world over. Perceptions of great whites as vicious, bloodthirsty human-killers had to be changed. Not seeing that her actions or life’s work was anything to write home about, Valerie’s humility is countered by talking heads eager to sing her praises. Jean-Michel Cousteau, son of the great oceanographer Jacques, marine biologist Jeremiah Sullivan and Wendy Benchley, wife of Jaws author Peter Benchley, all speak in glowing terms of their friend and colleague. It is quite right that come the closing credits Ron is allocated his own cinematography credit for Playing with Sharks.

The extraordinary amount of footage, which moves from monochrome, to grainy colour, to vibrant turquoises as technology and time march on, is really a wonder to behold. If, wherever you are in the world, there’s the opportunity to see Playing with Sharks on the big screen, then you should, to fully experience this eye-opening, vivid documentary.