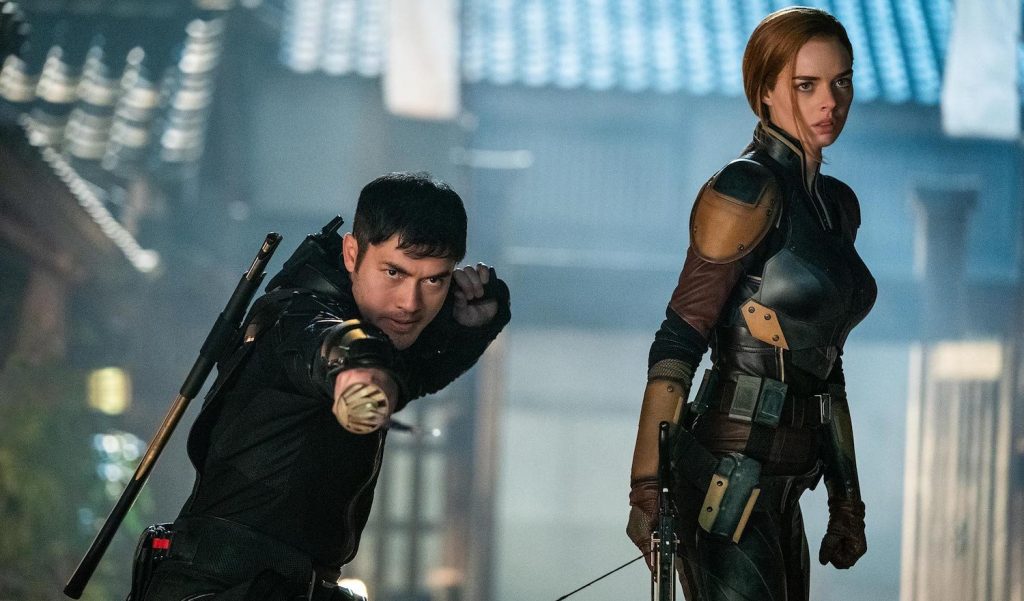 For all the snobbery over fast food, McDonald’s commands a certain respect for the uniformity and consistency of its products, the reassuring knowledge that a Big Mac will taste the same in Spain, South Africa or Switzerland. But the odd American tourist who decides to use a lunch abroad to investigate a foreign-run Mickey D’s franchise will find that while the menu’s staples remain unaltered, subtle additions have snuck their way on to those illuminated boards above the counter. In Japan, for example, intrepid lowbrow foodies can sample such local delicacies as the shrimp patty Ebi-Filet or the sauce-drizzled Chocolate Fries. It’s all comfortingly familiar in its slight novelty, just different enough to add mild flavor to the mélange of sameness.

That’s the long and short of the new Snake Eyes, a largely interchangeable hunk of Hollywood product somewhat distinguished by its Asiatic regional particulars. Robert Schwentke’s film arrives as both spin-off and prequel to a pair of rah-rah action GI Joe pictures/feature-length toy advertisements from 2009 and 2013, long enough ago that no one’s beholden to an elaborate architecture of continuity which must be buttressed and expanded. The background of Team Joe’s resident ninja Snake Eyes (Henry Golding) takes the shape of a martial arts showcase informed by both Japanese jidaigeki and Chinese wuxia cinemas, an apropos melding for a film set in Tokyo, featuring Malaysian and Indonesian actors, and primed for release in the lucrative Chinese market. The international language uniting this pan-Asian trans-Pacific affair is the beatdown, delivered here with an inventive playfulness, albeit with an impact lessened by leaden western techniques.

The early years of the boy who would be Snake Eyes go by the genre’s book, lighting a fire of vengeance in his young heart with a vicious attack that claims his father’s life. Cut to 20 years later and he’s still nurturing that grudge, so bent on retribution that he’s willing to play double agent for the nefarious Cobra syndicate just to get a shot at Dad’s killer. He infiltrates the elite Arashikage clan on behalf of Kenta (Takehiro Hira), the prodigal son once positioned for the top spot, now intent on taking it by force. As is part and parcel to this narrative tradition, honor and self-discipline will be weighed against hubris and rage, honor will be tested – we know the deal as well as Snake knows his way around a katana. The plot ultimately hinges on a magic jewel that can blow stuff up nice and big, just one illustration of how a script reliant on time-tested tropes can turn out underdone regardless. The characters are sketched with thin, functional strokes, all doing and no being, while the terminally uncool dialogue refers to a climactic fight as “the party”.

Technical accomplishment is supposed to be the draw in a set-up like this, a bargain that Schwentke cannot fulfill. The bloodless PG-13 deathstrikes never land with a satisfying force, a hollowness echoed in a drab CGI set piece pitting Snake Eyes against three oversized serpents. Despite the undeniable movie-star pull exuded by Henry Golding, he looks like a pretty-boy dabbler next to a cast stocked with veteran hand-to-hand experts like Iko Uwais, Andrew Koji and Peter Mensah. (Maybe the shamanic blind master played by Mensah could sustain a spin-off of his own in eight more years, like a presidential term.) An effort to obscure that much might explain all the nauseating handheld shooting, which chops the choreography to bits until the stilled, more orderly final reckoning. Picture Alec Baldwin in Glengarry Glen Ross chewing out the cinematographer Bojan Bazelli: “Put. The camera. Down!”

The inelegant in-your-face treatment of a graceful form halfway between boxing and chess betrays the American studio system’s crude approximation of the genuine article. Just as Snake Eyes first learns the steps of sparring without tapping into the warrior’s spirit, his film can adopt the markers of martial arts classics while missing the parts that contain their soul. The script’s attempts at wisdom amount to little more than dime-store platitudes, and the internecine turmoil of the Arashikage clan never comes close to anything like emotional heft. The flying fists may make this a relative anomaly for the multiplex release calendar, but that should be understood as the faintest possible praise, an acknowledgment that we’re looking at one of the more interesting varieties of boring movie. Anybody with curiosities piqued can watch one of the dozen superior alternatives coming out of Asia on a yearly basis, demonstrations of how gratifying middlebrow action can be in more capable hands. This was the promise of a globalized cinema landscape, now in doubt: that the planet’s best would be spread for all to enjoy, rather than mediocrities customized and shipped worldwide.

Snake Eyes: GI Joe Origins is out in US cinemas on 23 July and in the UK on 18 August