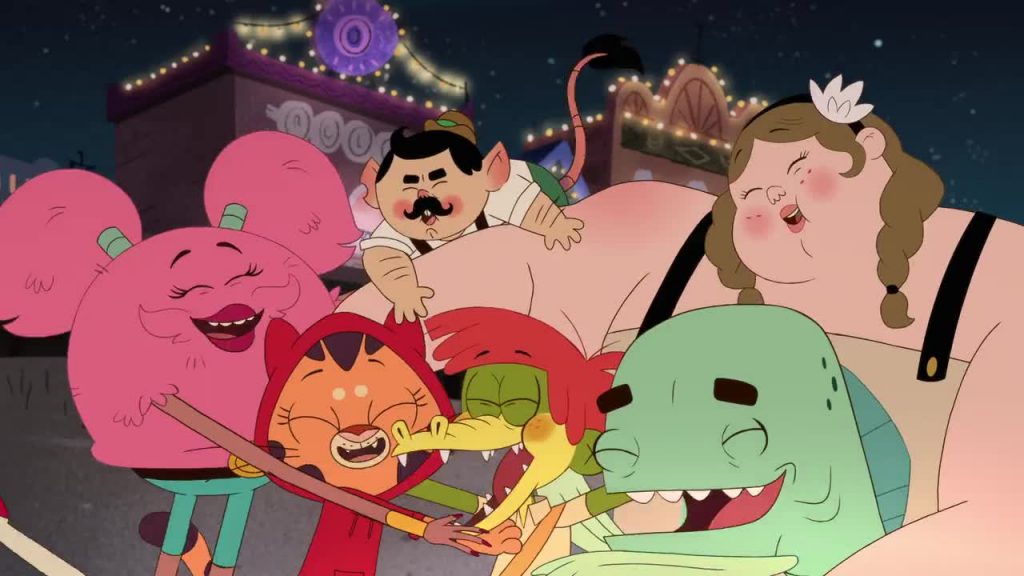 I Heart Arlo is a Netflix Original Series that follows up from the Netflix film Arlo the Alligator Boy. The show follows Arlo (Michael J. Woodward) as he and his friends make their new home in Seashore.

You don’t have to have seen the movie to enjoy the TV show. It’s charming, not especially plot-heavy, and chuckle-worthy in its own right. But if you’ve not seen the film, it may be worth a quick read of its synopsis at the least, if not a watch. The show is very clearly a direct continuation of the movie, and from the first episode, you may feel like you’re just slightly missing something important without that context. There’s no period of getting to know the characters or setting. The show just throws you right into the middle of their lives. On its own, this works just fine. It’s a kids’ show, and the exaggerated personalities of each character make everything easy to follow. But at the same time, there’s just something that feels like it’s missing without the prior knowledge of how Arlo, Bertie (Mary Lambert), and everyone else got to the places they’re clearly in the middle of being.

This feeling aside, I Heart Arlo is a cute show. Arlo is a lovely protagonist in his naive but never annoying way. Many of the show’s plots and comedic moments come at his emotional or intellectual expense, but you never feel talked down to as a viewer. Everything about Arlo is just too matter of fact to ever suffer from the over-exaggerated woes of other childrens’ television. Everything is extremely fast-paced in many of these rather short episodes, but it often becomes part of the charm more than it becomes distracting.

The art and animation styles for I Heart Arlo are crisp and appreciable. It’s not particularly stylized and draws you pretty immediately into its world as such. The lines can seem rather thick, making characters stand out strong, but the environments they’re drawn on are equally detailed and colorful, so it meshes together in a wonderful style. The character designs themselves are largely unique, ranging from Arlo’s half-gator half-boy to Furlecia’s (Jonathan Van Ness) literally being a walking pink hairball. The only thing that inexplicably irks me is the pink blush constantly on Arlo and Bertie. I don’t quite know why it bothers me, but it feels like a stylization that doesn’t match the rest of the universe.

The show’s many episodes possess many instances of breaking down body and gender norms, between the way Arlo dresses on occasion or a whole episode where Arlo sheds his skin. The messages are mostly clear each episode and positive. Many of the episodes also have musical numbers that help drive home their messages. While always pretty good, they often feel too verbose for the age demographic, using big words and complicated sentences. The electronic style feels like it doesn’t help either, but that could be a personal lack of familiarity with the type of music more than an inherent problem.

I Heart Arlo is a sweet show, ultimately. It has a few aspects that feel like they may be too fast or too over the heads of its audience, but in the end, it has a lot of charm and certainly stands out from the pack of children’s animation.

I Heart Arlo is streaming now on Netflix.