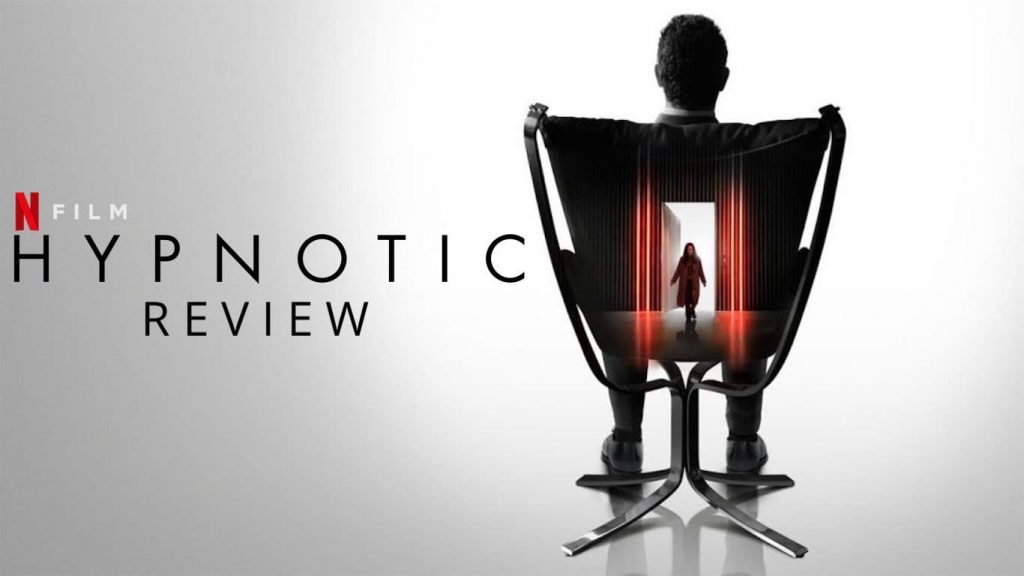 Hypnotic (Netflix) is about a woman, Jenn (Kate Siegel), who falls victim to a devious therapist and his evil hypnotherapy. She plays a woman recovering from a tragedy giving therapy a whirl There is a moment that the therapist Dr. Collin Meade (Jason O’Mara) mentions that Jenn might be more open to suggestibility. Well that is the moment you know the plot already.

Furthermore the name Collin Meade is an anagram for demonical!

So let´s continue with the story. Dr. Meade, a psychologist who recommends to Jenn that she be hypnotized on the spot in her first session. This is part of the plot off course however this seems like they cut some corners in the plot. This makes no sense. And makes even less sense if you know her past and her anxiety. After she wakes up after her first hour into her therapy, it seemed to her that the time flew by. Just imagine what a hypnotist/psychologist could do to you in one hour while you are out there in your dream world.

The next clue comes when Jenn and Gina (Lucie Guest) are performing Shavasana (a form of yoga – relaxation after a session). The name Shavasana comes from Sanskrit and means death, the context of a medieval belief system that “lying down on the ground horizontal, like a corpse, is called Shavasana. It eliminates tiredness and promotes calmness of the mind.

And when they accidently meet in a shopping centre, they have a discussion like he is a marriage counsellor and telling that she is not a victim anymore? How weird!

In the following weeks. Jenn finds herself having weird dreams and then actually losing time. It all leads to Jenn digging into past crimes involving accusations against a rogue hypnotherapist, a trustworthy detective who’s already on the case, Wade Rollins (Dulé Hill), and the realization that she’s now powerless against Dr. Meade because he can shut her down with a single word.

The pure idea of being completely helpless and paralyzed and at the feet of a madman is the only creepy idea. This movie does not exploit the best moments to turn it into a real horror movie.

When Dr. Meade’s full plan is revealed, there is idiocy and absurdity. Just watch. And there is a nice mini plot twist at the end in the villa of Dr. Meade.

The acting is good. Like they did the bare minimum to pass an exam. As a result of the combination of the plot (or lack of), the bare minimum of acting and filming and predictable characters, I can give only 6/10 for this movie. And you will think twice before seeking help with a hypnotist.