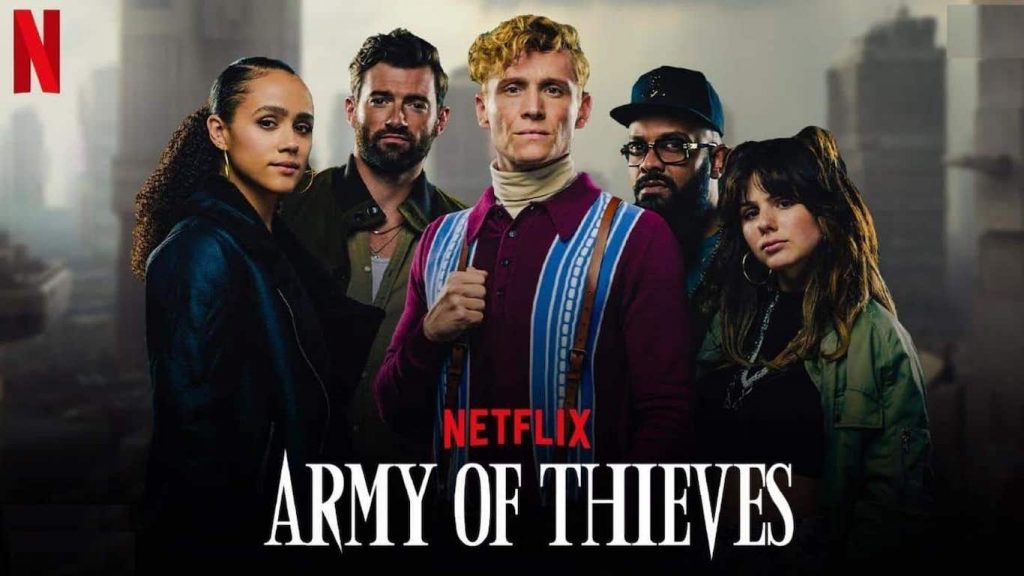 Zack Snyder serves as a producer and co-writer for the prequel to his Army of the Dead which is titled Army of Thieves, but the screenplay is written by Shay Hatten who was behind John Wick 3 and its sequels but of course serving as a co-writer for Army of the Dead. But Snyder leaves the director duties to Matthias Schweighöfer who was a stand out star in the original who also who reprises his role as Ludwig Dieter, alongside a supporting cast that includes Nathalie Emmanuel and a couple of lesser known actors like Ruby O. Fee, Stuart Martin, Guz Khan and Jonathan Cohen.

Deborah Snyder described the film perfectly as similar to The Italian Job in a world where zombies exist, while explaining that the film is standalone in nature. The producer classified the genre as a romantic comedy heist film that canonically depicts the early stages of the zombie pandemic portrayed in the previous film; stating: ” it takes place in a world where these zombies exist in America and it’s causing instability in the banking institutions. They’re moving money around, so it’s the perfect opportunity for a heist.” The film focuses on German safecracker Ludwig Dieter leading a group of aspiring thieves on a top secret heist during the early stages of the zombie apocalypse, and showing how he learned to crack safes with previous heist teams.

Army of Thieves is a good addition to the heist genre, though a very entertaining movie the problem I think many are having is how the film isn’t taking itself very seriously and that means some of the logic takes a backseat. The director knows it and thus he could make an entertaining film that will make you happy. Matthias Schweighöfer’s direction is absolutely fantastic, showing he’s a promising upcoming director. His performance as Ludwig Dieter is also terrific, fleshing out the character and making him even better than he was in Army of the Dead. Matthias Schweighöfer is truly the reason why this movie works so well. The editing and pacing is perfect, making each scene entertaining. Something on the negative side is of course parts of the screenplay isn’t that great and most of the characters are cliched. Some of Shay Hatten’s writing is flawed. Though the musical score is great, the sound editing isn’t quite on the same level. About the acting, both Matthias Schweighöfer and Nathalie Emmanuel are great in this film is great. The rest are either underused or just bad, Stuart Martin and Jonathan Cohen’s performances were flawed regarding their over-acting.

I also want to add that Matthias Schweighöfer is the best thing that Army of Thieves has to offer, his direction is aligned with Zack Snyder’s vision and own style which shows how much he learned of him. But he brings his own touch on the direction and dare I say, it’s brilliant. Army of Thieves is a nice addition to the Army franchise, but it has its flaws. But overall an entertaining heist film.