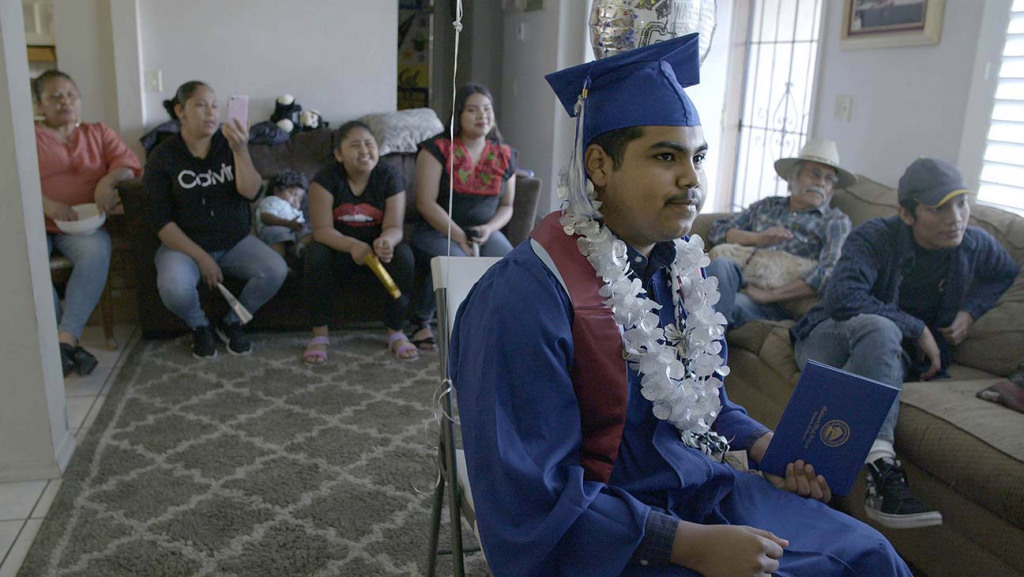 Drawing to a close with its most personal and difficult chapter, Peter Nicks’ loose trilogy of vérité documentaries about the public institutions of a single American city has now effectively done for Oakland what “The Wire” did for Baltimore, but without the safety net of a script. The tragedy of “Homeroom,” which drops us into a school year at Oakland High with the same degree of watchfulness that characterized “Waiting Room” and “The Force,” is that the chaos of real life is even more disruptive in this upbeat portrait of marginalized teenagers than it was in Nicks’ films about the intake procedures of the city’s underfunded hospital or the systemic violence of its overfunded police.

“Homeroom” is about the senior class of 2020. While these resilient kids may not be aware of the looming health crisis that will shit all over their spring semester and complicate whatever plans they may have, we can’t help but wince at how they talk about the future. But a dark pall would’ve been cast over “Homeroom” even if the coronavirus hadn’t been allowed to seep unchecked into American life, and even if the second half of the school year hadn’t been punctuated by the murders of George Floyd, Breonna Taylor, and Ahmaud Arbery, among other innocent Americans whose plights resonate personally with the majority Black and brown students in this film. In addition to everything else, Nicks’ teenage daughter Karina suffered a fatal drug overdose shortly after production started.

That awful detail isn’t explicitly part of “Homeroom” itself — aside from a touching dedication at the end — but it seems to inform so much of what we see onscreen in ways both understandable and poignant. While it might feel callous to belabor the rushed and scattershot editing of a documentary that pushed through so many difficulties to exist at all, the circumstances that compromise the film are also the same ones that conspire to make it such an affecting tribute to Nicks’ daughter, a fitting testimony to the perseverance of her entire generation, and a satisfying capstone to a project that has always stressed the need for people in a community to recognize each other’s pain.

“Homeroom” starts with the familiar chaos of a new school year, complete with the synth-pop soundtrack and social media preoccupation you might find in any basic teen dramedy. But such broad signifiers of the modern high school experience are immediately complicated by more adult concerns, as the students of Oakland High are getting a firsthand education in how social inequality trickles down from the top and stagnates America’s underprivileged kids before their lives even really get a chance to start.

Fortunately, the senior class of 2020 seems to have learned some valuable lessons in spite of a school board that keeps slashing away at their opportunities. They’ve done the math, and it turns out the recent wave of budget cuts — the ones that have sparked widespread teacher strikes, impacted classes that make it possible for lower-income students to adequately prepare for standardized tests, and killed programs that entice kids to go to school in the first place — could probably have been avoided if Oakland Unified weren’t the only district in the county that spends tens of millions on a dedicated police force.

Homeroom” pinballs around a small group of peers without carving out any clear storylines between them, but the objective veneer of Nicks’ observational approach can’t stop one of the students from emerging as the unambiguous lead character. An undocumented but outspoken senior always happy to remind any patronizing adults that he represents 36,000 kids as one of the two Student Directors on the Board of Education, Denilson Garibo is such a force of nature that the film only suffers whenever it tries to pretend like he isn’t its star. Other faces become recognizable, but Nicks flattens them into basic context for the injustices Garibo is fighting on their behalf.

The vulnerability of his status might impact Garibo’s ability to protest in the streets, but he more than makes up for that with the righteous fire he brings to school board meetings (some of which memorably self-immolate without any help from the students in the room). Nicks may not “take sides,” but there’s no mistaking the abject uselessness of Mayor Libby Schaaf’s advice when she passes the buck on the budget crisis by telling Garibo and his classmates to “know their power and claim it.” Cool. Just one question: How are these kids supposed to learn about their power in an educational system determined to deny it from them?

That may sound like a rhetorical question, but “Homeroom” raises its hand with a compelling answer by honing in on the galvanizing impact that Garibo and his friends have on each other. While the occasional adult manages to get a word in edgewise, and Oakland High’s teachers aren’t entirely reduced to “Peanuts”-like mumbles (or aphoristic catchphrases like “It behooves you to be super engaged today, because tomorrow is looming”), Nicks’ film is all about the strength these kids share among themselves.

It’s a choice the documentary seems to come by honestly — one that excuses Nicks’ general disinterest in the students’ home lives, but also exacerbates the feeling that we don’t get to know any of the film’s individual human subjects as well as we do its broader sociopolitical ones. Even the irrepressible Garibo is whittled down into a representation of generational resilience at the expense of the much fuller character we glean from choice snippets that made the final cut; one quick party scene indicates so much about extracurricular code-switching that the rest of the school scenes leave us feeling like we’re only getting half of the picture.

When COVID finally hits, it’s safe to assume that “Homeroom” is only going to get broader and more abstract, but that’s only true to a certain extent. On the one hand, Nicks was obviously caught off-guard by the crisis and had to roll with the punches; there’s only so much you can do to balance out a film that started production in one reality and ended in another. On the other hand, his footage from the days before schools closed already feels like a fascinating time capsule of how America’s teens responded to the new shape of their lives (with more initial excitement and less enduring panic than the rest of us, it seems).

If the first half of “Homeroom” is held together by a bit too much faux-inspirational stucco, its climactic protest scenes deliver the real deal and then some, as these kids — deprived of every meaningful aspect of their high school experience save for the police — continue to know their power and teach each other how to claim it together. Nicks has spent the last decade working to illustrate how the people of Oakland are connected even when their institutions work to cut them apart; messy as the final installment of his trilogy might be, and painful as it must have been to make, it’s hard to imagine how Nicks could have found a better or more hopeful way of hammering that point home.