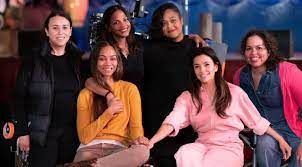 Maybe in part because the present looks so bleak, it’s lately been a boom time for shows about looking back on childhood. “The Wonder Years,” on ABC, is an update of the 1980s classic, now narrated by Don Cheadle as he reflects on the Montgomery of the 1960s. “Young Rock,” on NBC, burnishes Dwayne Johnson’s image, dramatizing the ‘80s and ‘90s as lived by a would-be wrestling superstar. And now, HBO Max brings us “Gordita Chronicles,” a winsome look at a Dominican family who’ve just moved to Miami in 1985. Like the similar series currently on broadcast TV, “Gordita Chronicles” is nostalgic — both for the time it depicts and a style of television that used to be much thicker on the ground.

That’s because “Gordita Chronicles” is assertively a Family TV show — and not in the sense of the phrase that’s meant to imply that it’s for children. Indeed, it can seem at times stuffed with something to satisfy every possible viewer: While Cucu, known as “Gordita” (Olivia Goncalves) gets started in an American school and begins making friends, her mother (Diana Maria Riva) is adjusting to the Miami way of life and her father (Juan Javier Cardenas) is establishing his career. This means that episodes can toggle between Gordita’s prosaic problems, the slightly more mature concerns of her older sister Emilia (Savannah Nicole Ruiz), and dad deciding whether or not it’s appropriate to take a business meeting at a strip club.

Which is to say that “Gordita Chronicles” stands out in its willingness to apply the same tone to disparate family members’ stories. It doesn’t lose its balance — throughout, it tells its story with an un-jaded, charmingly direct approach, aided by the excellent work of the child performers. Goncalves is an excellent anchor, combining the impish pique of a kid with a sense of how to deliver a punchline that belies her youth. She never seems theatrical; Cucu’s a kid you believe you might meet, just with all of the savviness the media age has given tweens taken away. The show, seemingly for the ease of an Anglophone audience, has the family generally speak in English at home (somewhat deflating an episode in which Cucu must learn English, which she’s been speaking fluently the whole time). But their challenges to adjust to America come across plainly all the same. I wanted slightly more of Riva as Cucu’s mother; this performer’s frank refusal to engage with customs she doesn’t get and whose sense of herself as being only momentarily removed from the luxury she deserves recalled the excellent work by Constance Wu in “Fresh Off the Boat.”

“Gordita” can be shaggy. Dascha Polanco’s narration as the adult Cucu is well-delivered, but lines like “In that moment, I realized I had been so worried about the lie of the party that I forgot that I could be the life of the party” clang. And though competently directed (including, in the pilot, by executive producer Eva Longoria), the show is clearly running up against a limited budget, as at least one key punchline to a scene happens offscreen.

In all, though, the series charms, aided by Goncalves’ work as a spirited, mouthy tween whose belief in herself carries her family along with it. In its depiction of a more innocent time and its existence as a streaming series that wouldn’t have been out of place in the TGIF lineup of millennial childhood, it’s a double throwback.