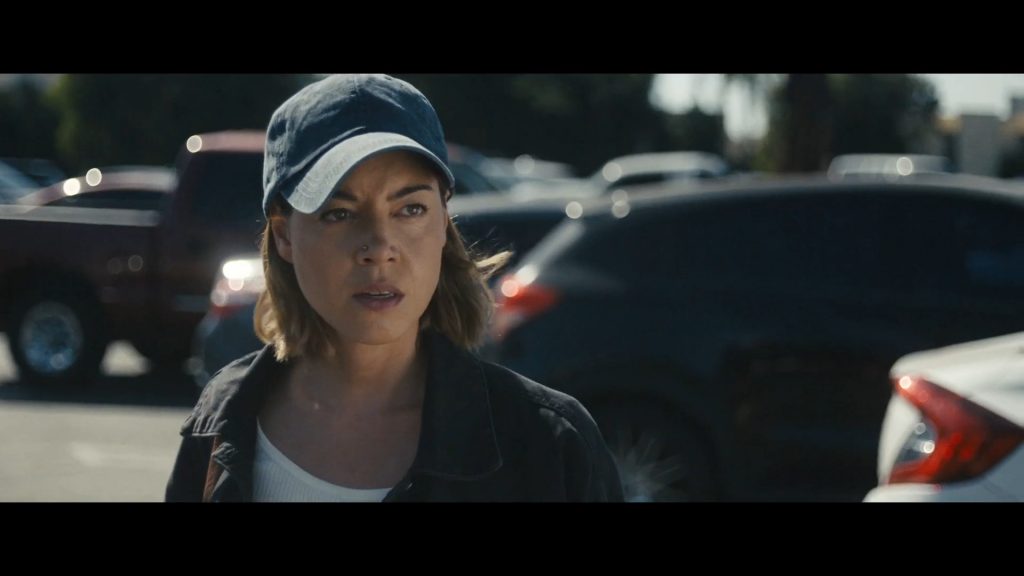 Aubrey Plaza has become one of Hollywood’s most dynamic actresses, taking on roles that have offered something creatively satisfying and different in each one. In Emily the Criminal, Plaza gives all she’s got to play a gritty, desperate character with a criminal past. Elevated by an incredible, layered performance, writer-director John Patton Ford’s debut feature is a show-stopping, intense thriller with depth.

Emily the Criminal opens with the titular character (Plaza) in an interview for an office job and it isn’t long before the employer asks about her criminal record — a DUI and an assault in 2016. Emily, however, can’t get past the fact that the employer lied about not having done a background check. Frustrated, she leaves, having wanted the job to pay off her $70k in student debt for an art degree she never received. It’s a scene that does a lot to set up the rest of the film and to understand Emily’s motivations. Emily works at a catering job, but when her coworker tips her off about a job that would pay her $200 an hour, she’s interested enough to find out more. Emily ultimately finds herself in the middle of a credit card scam operation run by Youcef (an excellent Theo Rossi). While Emily has trepidations about doing something illegal considering her past record, she goes all in for the money.

Emily the Criminal is deftly handled, with the film including incendiary commentary on a capitalist society that is not at all kind to anyone who is struggling financially and who have a criminal past employers aren’t soon to forget. Emily works hard as a contract caterer, but that’s barely enough to make a dent in a student loan with growing interest. If she takes even a few hours off from her job to work a gig that will pay her way more, her employer is quick to remind her she isn’t a real employee with rights. It’s a grim life for Emily and the film hits the nail on the head with regards to the hardships faced by a large part of the population. It also has a lot to say about past crimes and the way those with records are treated in the job market. Suffice it to say the film is very aware about the myths of working hard to be successful.

Emily’s criminal past haunts her and an unpaid design internship at her friend Liz’s (Megalyn Echikunwoke) ad agency isn’t going to pay the bills no matter how “competitive” the role. Plaza portrays Emily as someone who’s clearly been hardened by life and seems always on the verge of losing her patience out of frustration. But Emily is also nervous about going further down the rabbit hole, with Plaza conveying this anxious energy in her body language and through eyes that move back and forth so fast one would think she’s looking for an exit route. This might be one of Plaza’s most intense roles yet and she nails every moment, fleshing out Emily in a way that makes her easy to root for in less than ideal circumstances.

Emily the Criminal is also equal parts gripping and thrilling. The film sets the stage for a tension-fueled climax that is essentially a heist with huge personal stakes. Emily and Youcef prove to be a dynamic duo, with Rossi matching Plaza’s weariness, a migrant who’s trying to make his and his mother’s life financially stable. Their final plan wouldn’t work if not for the meticulously executed story, with Ford doing a great job establishing the characters and their dilemmas before jumping into the heist portion. The film could’ve easily fallen into a pattern, but Ford manages to avoid that completely, building intensity from situations that are authentic to the characters’ journeys.

Emily the Criminal is a thriller with character depth and grave stakes and it’ll leave audiences at the edge of their seat. Jeff Bierman’s cinematography ramps up the tension. Cameras close in on Plaza’s face during bleak, adrenaline-fueled moments to capitalize on the risk and fear of the moment, while following her from behind when fleeing enclosed spaces where she may have been spotted. Meanwhile, Nathan Halpern’s score crescendos during the film’s most dramatic moments, complementing each scene and elevating the feelings of the characters at every turn. Poignant in parts, sharp and thrilling in others, Emily the Criminal satisfyingly delivers on many levels.