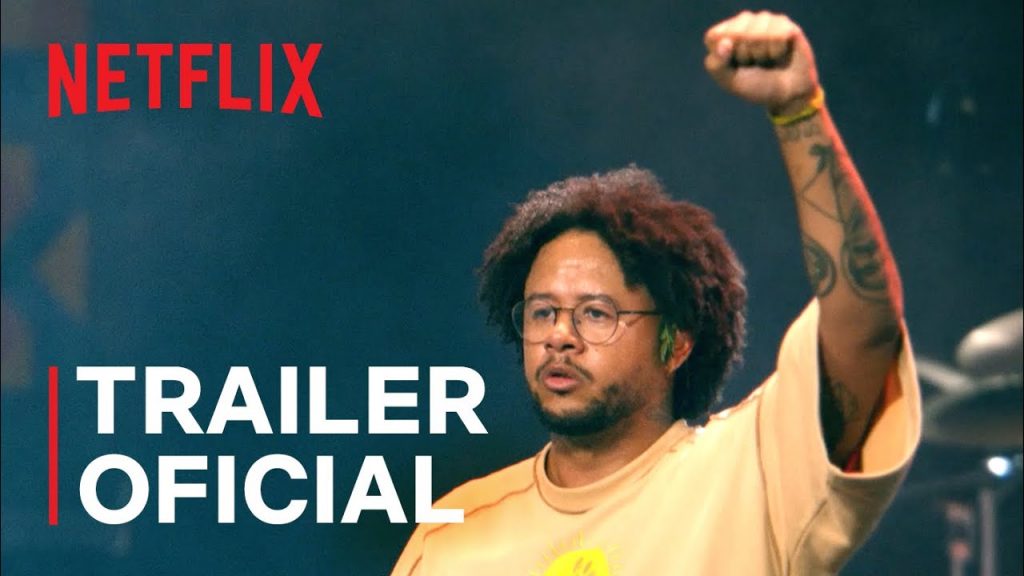 Sao Paulo-based Emicida is one of Brazil’s best-known MCs. It’s All For Yesterday (Netflix) weaves together live concert footage, interviews, recording sessions for his 2019 album AmarElo, and engaging animated sequences that illuminate the legacy of Black culture in Brazil.

My mom calls me Leandro,” says the star at the outset of this engaging Netflix documentary. “But everyone else knows me as Emicida.” He’s also known as a polymath. A respected MC with numerous mixtapes and albums to his name, he’s also a singer and songwriter, plays multiple instruments, is a complete fiend for listening to and collecting records, has made the recording studio a second home, and exists as an oracle of history and knowledge about the black creative and cultural experience in Brazil. With footage to anchor it from Emicida’s triumphant hometown concert at Theatro Municipal, recorded in 2019 at Sao Paulo’s landmark arts institution, It’s All For Yesterday also relates through animated sequences and vintage footage the history of slavery in Brazil and its fallout, the birth and proliferation of samba, hip-hop’s arrival in the country, and its maturation as a cultural force. Speaking with the ease of a university professor delivering a favorite lecture, Emicida meshes these storylines with his own role as a contemporary artist, and offers an astute delineation of how, for people of color in Brazil, art has always aligned with activism. “The message couldn’t be any clearer,” he says. “We can go even further.”

It’s All For Yesterday is presented in three acts: “Planting (Plantar),” “Watering (Regar),” and “Harvesting (Colher).” As Emicida leads an enraptured full house through his set, supported by a lively band featuring guitar, bass, drums, a DJ, a full horn section and backup singers, the doc periodically steps away from the concert to explore in greater detail the black historical experience in Brazil. Informative, sharply-rendered animations blend seamlessly with a wealth of old tape, much of it depicting old samba masters at work, often in streets or homes, sharing the style’s definitive rhythms on tamborim and surdo drums. Emicida narrates it all, and expands on how the narratives and personalities in this history informed his own music. “Everytime I grab my pen or mic, I wanna be able to return to each of my brothers and sisters the soul they thought they didn’t have.”

As the sessions for AmarElo start to gel, Emicida gives thanks that he and his regular collaborators’ hard work over the last decade-plus have afforded them the ability to get the legends of Brazilian music in the studio and on the album. We also return a final time to Theatro Municipal for the concert’s thrilling finale, and a brief final section of It’s All For Yesterday comments on 2020 and COVID-19’s arrival in Brazil. In Emicida’s view, the dire circumstances of a pandemic are nothing Black Brazilian culture hasn’t faced head on and overcome before.

What Movies Will It Remind You Of? The 1959 Marcel Camus film Black Orpheus expanded the global footprint of bossa nova, and depicts the integral role of samba in the everyday lives of Brazilians. Tata Amaral’s 2006 film Antonia follows an all-female hip-hop group from the favelas of Sao Paulo all the way to fame. And the spirit alive in the crowd at Emicida’s AmarElo theater show is wild and apparent in Dave Chappelle’s Block Party, Michel Gondry’s 2006 chronicle of the comic’s legendary all-star concert held on a Brooklyn street.

Performance Worth Watching: As a rapper, Emicida is a captivating blend of high-flying erudition, pugnacious rap battle spirit, and reverent spiritualism. All of that’s on display in the concert footage here, but it’s the in studio sequences where he really shines, describing the sounds and rhythms he hears in words and song, and keeping the vibe loose even as he collaborates at the mixing board with his longtime musical heroes.

Memorable Dialogue: Emicida connects rap as a generational force in Brazil to the legacy of those creators and genres that came before, and who did the work to permeate culture with art. “Hip-Hop was already there long before we existed,” he says. “This bittersweet fruit we call rap grew from a big tree,” and the animation depicts names of notables multiplying in the shadow of a shade tree, many of them dating to the 1900’s. “If you examine its roots closely, you’ll find samba there.”

Our Call: Emicida and his jams are clearly beloved by his fans, and the scenes from his sold-out concert of fans, arms and fists outstretched, rapping and singing along in unison with his every word as they hug and cry all over each other, are refreshing, even painfully sad after a year that stole that sense of camaraderie and community from our lives. But the Theatro Municipal is both a concert venue and a cultural touchstone. Emicida explains how the building is connected to each era of the Black experience in Brazil, from the slave era on through to the protests for equality that took place on its steps in the 1960s and 70s. By throwing his hometown gig at the theater and inviting all of his fans, he’s uniting what they stand for in the present to a greater narrative from the past. “I want them to leave and say ‘I won’t let this get lost in the digital world,’” he says of that effort. It’s soulful, powerful, and supported by some serious rhyming on stage. “My dreams fly higher than drones!” “Like water I can flow through rocks!”

As much as he’s a performer, Emicida is also an activist and cultural historian, as he illustrates throughout It’s All For Yesterday. In one enlightening sequence, he explains how hip-hop was transformed even as it took over as the sound of the Favelas. A groundbreaking, trailblazing generation of Sao Paulo rappers “gradually thinned out the Americanness in it, proving that it’s impossible to appreciate the Brazilian melting pot without being influenced by the local spirit.” This is a doc that offers hip-hop heads real insight into an MC killing the game, but also rewards the viewer with an impressive survey of history. We leave having been entertained, but also educated and even inspired.

Our Take: STREAM IT. Entertaining, informative, and rich in visuals and sonics, AmarElo — It’s All For Yesterday is as much rap concert as it is history lesson, and offers real insight into a compelling young performer.