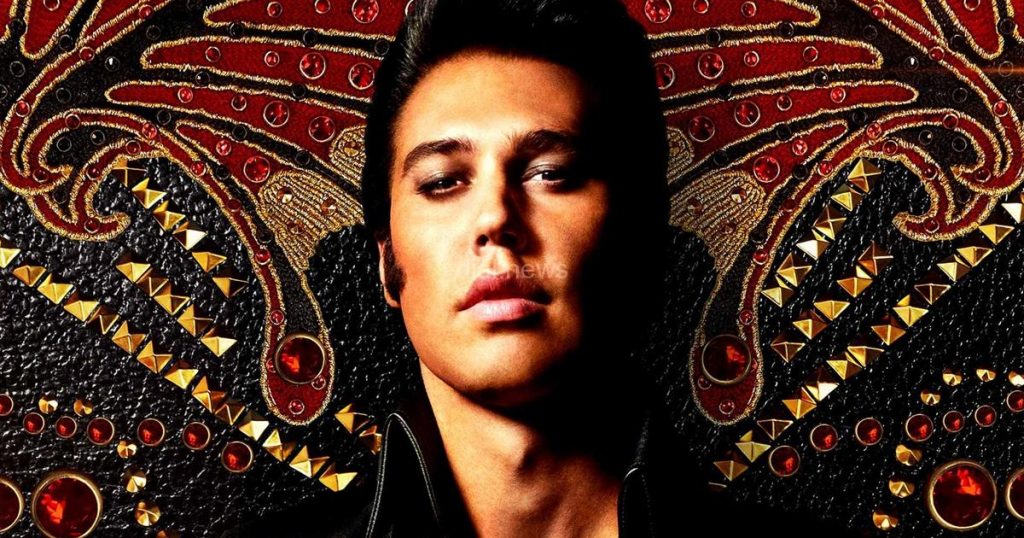 Elvis Presley, with the exception of the Beatles, is the most mythological figure in the history of popular music. That makes him a singularly tempting figure to build a biopic around. But it also makes telling his story a unique challenge. Everything about Elvis (the rise, the fall, all that came in between) is so deeply etched in our imaginations that when you make a dramatic feature film out of Elvis Presley’s life, you’re not just channeling the mythology — you’re competing with it. The challenge is: What can you bring to the table that’s headier and more awesome than the real thing?

Baz Luhrmann’s “Elvis” is a fizzy, delirious, impishly energized, compulsively watchable 2-hour-and-39-minute fever dream — a spangly pinwheel of a movie that converts the Elvis saga we all carry around in our heads into a lavishly staged biopic-as-pop-opera. Luhrmann, who made that masterpiece of romantically downbeat razzle-dazzle “Moulin Rouge!” (and in 20 years has never come close to matching it), isn’t interested in directing a conventional biography of Elvis. And who would want him to? Luhrmann shoots the works, leaping from high point to high point, trimming away anything too prosaic (Elvis’s entire decade of churning out bland Hollywood musicals flashes by in an eye-blink). He taps into the Elvis of our reveries, searing us with the king’s showbiz heat and spinning his music — and how it was rooted in the genius of Black musical forms — like a mix-master across time.

Yet “Elvis,” for all its Luhrmannian fireworks, is a strange movie — compelling but not always convincing, at once sweeping and scattershot, with a central figure whose life, for a long stretch, feels like it’s being not so much dramatized as illustrated.

Austin Butler, the 30-year-old actor who plays Elvis, has bedroom eyes and cherubic lips and nails the king’s electrostatic moves. He also does a reasonably good impersonation of Elvis’s sultry velvet drawl. Yet his resemblance to Elvis never quite hits you in the solar plexus. Butler looks more like the young John Travolta crossed with Jason Priestly, and I think the reason this nags at one isn’t just because Elvis was (arguably) the most beautiful man of the 20th century. It’s also that Butler, though he knows how to bring the good-ol’-boy sexiness, lacks Elvis’s danger. Elvis had a come-hither demon glare nestled within that twinkle of a smile. We’ve lived for half a century in a world of Elvis impersonators, and Butler, like most of them, has a close-but-not-the-real-thing quality. He doesn’t quite summon Elvis’s inner aura of hound-dog majesty.

Luhrmann has always had the fearlessness of his own flamboyance, and from the first moments of “Elvis,” which take off from an outrageous bejeweled version of the Warner Bros. logo, the film lets us know that it’s going to risk vulgarity to touch the essence of the Elvis saga. There’s a luscious opening fanfare of split-screen imagery, showing us how Elvis loomed at every stage — as the smoldering kid whose hip-swiveling, leg-jittering gyrations knocked the stuffing out of our sexual propriety, and as the decadent Vegas showman who flogged his own legend until it was (no pun intended) larger-than-life.

But the way that Butler comes off as more harmless than the real Elvis ties into the key problem with the film’s first half. Luhrmann is out to capture how Elvis, with his thrusts and his eyeliner and his inky black hair falling over his face, was a one-man sexual earthquake who remade the world. Yet Elvis’s transformation of the world was, in fact, so total and triumphant that it may now be close to impossible for a movie to capture how radical it was. With its over-the-top shots of women at Elvis’s early shows erupting into spontaneous screams, or throwing underwear onstage, plus scandalous headlines and finger-wagging moral gatekeepers growing hysterical over how Elvis was busting down racial barriers or promoting “indecency,” “Elvis” keeps telling us that it’s about an insurrectionary figure. The irony is that Luhrmann’s style is too ripely sensual, too post-Elvis, to evoke what the world was like before Elvis.

We see Elvis as a boy sneaking into a Black tent-show revival, fusing with the writhing gospel he encounters there, or hearing Arthur “Big Boy” Crudup (Gary Clark Jr.) sing “That’s All Right Mama” in a slow high blues wail. Then we hear what Elvis did with that music, syncing it to his own speedy spirit. Elvis stole the blues, all right, or at least borrowed them, but the movie shows us how he frosted them with a bouncy layer of country optimism and his own white-boy exhibitionism. The film dunks us in Elvis’s blue-suede bliss and then checks us, after a while, into his heartbreak hotel. In a way, though, I wish that Luhrmann had told Elvis’s story in the insanely baroque, almost hallucinogenic fashion of “Moulin Rouge!” For all the Elvis tunes on the soundtrack, the film doesn’t have enough musical epiphanies — scenes that blow your mind and heart with their rock ‘n’ roll magic.

And what “Elvis” never quite shows us, at least not until its superior second half, is what was going on inside Elvis Presley. For a while, the film plays like a graphic novel on amphetamines, skittering over the Elvis iconography but remaining playfully detached from his soul. Instead, it filters his story through the point-of-view of his Mephistophelean manager Svengali, Col. Tom Parker, who is played by Tom Hanks, under pounds of padding and a hideous comb-over, as a carny-barker showman with a hooked nose and a gleam of evil in his eye.

By framing “Elvis” as if it were Parker’s self-justifying story, the movie structures itself as a tease: Will it really show us that Parker, as he claims in his voice-over narration, has been given a bum rap by history? That he not only made Presley’s career but had his best interests at heart? No, it will not. Yet Luhrmann, in presenting the Dutch-born, never legally emigrated Parker (née Andreas Cornelis van Kuijk) as a master flimflam artist who saw himself as the P.T Barnum of rock ‘n’ roll, revels in a certain fascinating ambivalence. Hanks, with his mustache-twirling accent and avaricious gleam, makes Parker a cousin to Jim Broadbent’s nightclub impresario in “Moulin Rouge!” — a corrupt showman who will do and say anything to keep the show going. Parker latches onto Elvis in 1955, then stage manages his career to within an inch of its life. Elvis, turned into the Colonel’s hard-working show horse, becomes a victim of Stockholm syndrome; no matter how much he sees through the Colonel’s schemes, he can’t bring himself to quit him. Yet he spends the rest of his life rebelling against him.

The movie shows us how Elvis’s career, after its volcano eruption in the mid-’50s, became a series of defeats and escapes. To calm the controversies that Elvis first inspired, the Colonel repackages him as “the new Elvis” (read: a singer of family-friendly ballads), which only makes Elvis miserable. To further defuse the attacks upon him, Parker, in 1958, encourages Elvis to go into the Army as a way to clean up his image. Stationed in Germany, Elvis meets the teenage Priscilla — but it’s one of the film’s telling flaws that the actress who plays her, Olivia DeJonge, registers strongly in an early scene but scarcely has the chance to color in her performance. Given the film’s epic ambition, the script of “Elvis” (by Luhrmann, Sam Bromell, Craig Pearce, and Jeremy Doner) is a weirdly bare-bones affair. Hanks delivers a performance that’s a luscious piece of hambone duplicity, but why aren’t there more piercingly written scenes between Elvis and the Colonel? Or Elvis and Priscilla? The Colonel should have been a great character, not a succulent trickster cartoon. If these relationships had been enriched, the story might have taken off more.

That Luhrmann compresses most of the 1960s into a two-minute campy montage, which parodies Elvis’s life as if it were one of his movies, is the clearest sign that “Elvis” is no orthodox biopic. The film’s second act leaps ahead to Elvis’s 1968 comeback special — the filming of it, and the backstage politics, which involve Parker promising NBC that they’re going to be getting a Christmas special, a plan we see undermined at every turn by Elvis and the show’s director, Steve Binder (Dacre Montgomery). The comeback special was, of course, a triumph, but the way Luhrmann tries to package it as a drama of sneaky rebellion doesn’t quite come off.

What comes off with startling power is the final third of the movie, which is set in Las Vegas during Elvis’s five-year residence at the International Hotel. For years, it became a cliché to mock Elvis for having embraced the shameless Middle American vulgarity of Vegas: the shows that opened with the “Also Sprach Zarathustra” fanfare from “2001,” the karate moves, the brassy orchestral sound of songs like his reconfigured “Battle Hymn of the Republic.” And, of course, he was on drugs the whole time. What Luhrmann grasps is that the Vegas years, in their white-suited glitz way, were trailblazing and stupendous — and that Col. Parker, in his greedy way, was a showbiz visionary for booking Elvis into that setting. The film captures how Elvis did some of his greatest work as a singer there, apotheosized by the avid ecstasy of “Burning Love.”

Yet as “Elvis” dramatizes, Vegas also became Presley’s prison, because Parker nailed him to a merciless contract, and for the most scurrilous of motivations: The Colonel needed Elvis at the International to pay off his own mountainous gambling debts, even if that meant that the singer, offstage (and, ultimately, onstage), became a slurry, pill-popping ghost of himself. Our identification with Elvis only deepens as we realize that he’s “caught in a trap.” The film’s richest irony is that Butler’s performance as the young Elvis (the one who’s far closer to his own age) is an efficient shadow of the real thing, but his performance as the aging, saddened Elvis, who rediscovered success but lost everything, is splendid. He’s alive onstage more than he was doing “Hound Dog,” and offstage, for the first time in the movie, Elvis becomes a wrenching human being. Luhrmann has made a woefully imperfect but at times arresting drama that builds to something moving and true. By the end, the film’s melody has been unchained.