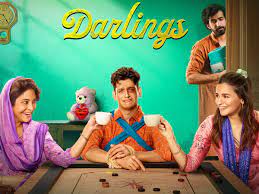 Just when we think that Bollywood is lacking black comedies, Alia Bhatt has brought Darlings with Shefali Shah, Vijay Varma and Roshan Mathews. The world of Darlings is not at all modern like its title, but the message is suitable for modern-day cinema. Bollywood hasn’t got many black comedies that can be remembered. All we remember is those 80s dark comedies made with non A-listers in the cast, and therefore they never got as much hype as they deserved. The box office perspective rests beside, because we know it’s nothing sort of commercial stuff. Darlings too falls in the genre and lacks commercial appeal that masses seek for. However, the entertainment never stops. That’s some great fun for classes, but I doubt if the masses can really understand it to its core. If only laughter matters, then be assured, there are many.

Darlings is about Badru (Alia Bhatt), who is married to her lover, Hamza (Vijay Varma). Soon after marriage, their love story turns into a hate story as Hamza loses his anger and beats Badru occasionally. Badru always falls for Hamza’s fake promises, and despite several warnings and advice from her mother, Shamsu (Shefali Shah). The beating reaches a certain point where Badru loses her patience and takes a stand against a brutal husband, but in a different way. What follows is a fun ride of revenge and blame game where even the police get involved, but remain clueless. Will Badru get her revenge and get away from it? Find out all the answers in Darlings’ climax.

The script Written by Parveez Sheikh and Jasmeet K. Reen offers everything that any household story can tell you. These arguments and physical abuses between a husband and a wife do happen in almost every lower and Middle class home. The characters are stable despite wild features, but we do meet such people in chaawls, right? Darlings is about 130 minutes long and never looks streched or boring. It keeps you engaged with its pacy screenplay even though you know all the conflicts are mostly predictable. What lifts the script up the trick planted by the writing duo in the climax which sustains two generations and empowers them to connect with a modern audience.

Talking about actors, Darlings is a top-notch show. Alia Bhatt proves again that why she is one of the finest actresses of her time. She is phenomenal as Badru and you are going to love the transformation from a cow-natured woman to a tigress. Look at her expressions, shivering and quivering, and you’ll feel it. Watching it on a big-screen would have helped a bit, but let’s just forget that for now. The second lady, Shefali Shah, is equally great. Her experience and calibre is so high that she just can’t feel as you assume, and she does exactly that. Most of the dark punches falls at her feet with that impeccable dialgue delivery. Vijay Varma is surely raising the bar with every film, and Darlings is another step of ladder for him. In the supporting roles Roshan Mathew, Santosh Juvekar and Vijay Maurya are fantastic. As a whole, the acting unit had a blast and you’re in for a treat.

Darlings has good situational numbers like “La Ilaaj,” “Bhasad,” and “Pleaj,” which carry the momentum quite well. Although none of them has those club beats to make you groove, all three songs make sure you don’t use fast forward button during the play. The editing is tight and keeps you hooked with realistic surrounding which is boosted by slum-flavoured dialogues. Jasmeet K. Reen’s feature film debut is definitely noteworthy. Being a female herself, she knew how to deal with the feminine angle without making it look forceful. Darlings has no flaws as far as the direction of Reen is concerned, but yes, overall there are a few. The pre-climax portion is predictable and typical, but thankfully the main climax does not make itself a typecast. Overall, Darlings packs a solid punch of dark comedy, romance, drama and feminine revenge in a wholesome entertaining plot. This one is a tough watch for husbands and wives, but a must watch too.