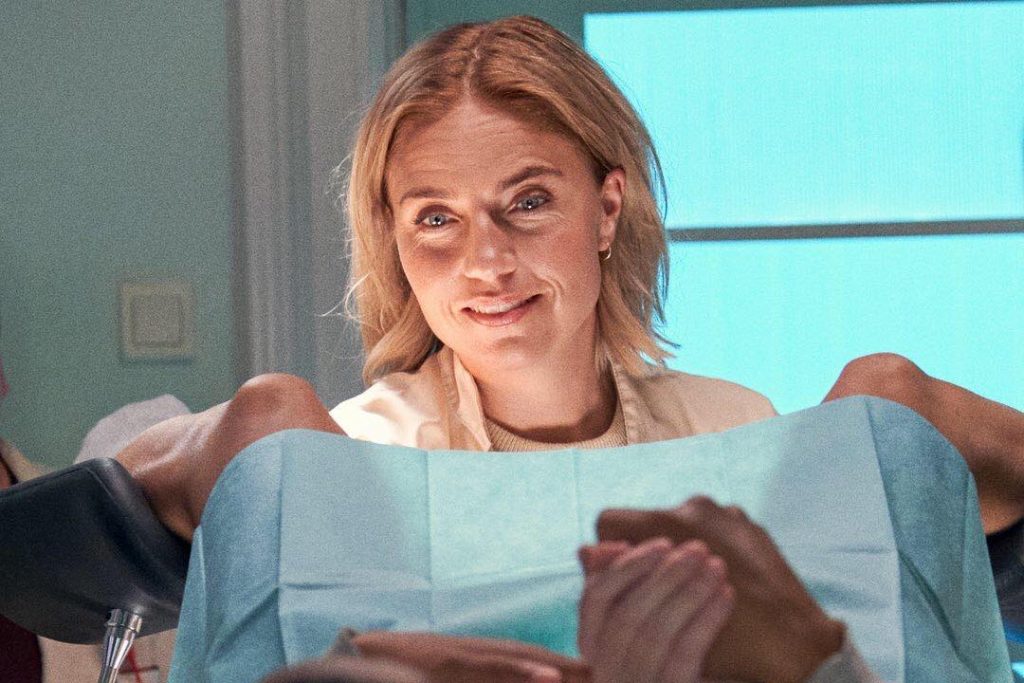 We then see a picture of Nana Jessen (Josephine Park), one of the best fertility doctors at the Copenhagen clinic where she works. She’s the one drunkenly stumbling around in the dark. She grabs a sperm sample and an insemination kit, and inseminates herself. She wonders to herself if she can go to jail for it. “But I could have a baby.”

Three days earlier, we see Nana at work in the clinic. She seems to be perfectly content with getting others pregnant, and she has a knack of being able to relate to them by making up stories about her kids, who don’t exist. She’s so good, her boss Helle (Charlotte Munck) asks her to help her and her wife to conceive. Nana also seems OK to have sex with boring but hot guys like the knew physiologist. But when the clinic’s nurse/her best friend Simone (Olivia Joof Lewerissa) helps her break in a new ultrasound machine with an exam, Nana finds out that she has 3 follicles left. In other words, about six months until she has no more eggs.

As she commiserates with Simone over bowling and some booze, Nana gets the shock of her life when she runs into an old flame named Mathias (Simon Sears) outside the clinic. They broke up years ago when he left Denmark to work for an NGO; he’s there to drop off a sample at the sperm bank.

Simone gets Nana Mathias’ info, which is supposed to be kept confidential, and they go out on a nice date, which Nana blows by asking him if he wanted to have kids. A night of shots in the clinic with Simone after that debacle leads Nana to inject that sperm sample into herself. But it’s not just any sample; it’s Mathias’.

The reason why Baby Fever, created by Nikolaj Feifer, works so well is Josephine Park. From the first time we see her, we know she’s playing Nana as a woman who is certainly having some feels as she approaches 40. She’s in a profession where she’s helping women conceive, and she’s really good at it, but she’s finally feeling a little bit of emptiness that she’s single herself. But she’s not prodded into any action until she realizes her childbearing time is short, and the one that got away is back in her life.

All of those emotions can be seen in Park’s performance. She’s ambivalent, then sad, then ambivalent again. She does enjoy her job, even if it gives her a bit of an empty feeling. She’s good with kids, a we see when she interacts with Simone’s son. And when Mathias comes back in her life, you can see her brighten with the prospect that there’s some hope, albeit brief, that a fulfilling relationship is on the horizon.

Her best relationship, though, is with Simone, and at the outset of the series, it’s also one of the things that makes us want to watch. It’s a solid friendship, and Park and Lewerissa have great chemistry. It’ll be interesting to see if their friendship is threatened by Nana’s actions or by her relationship with Mathias, which is going to proceed on shaky ethical ground to begin with.

But as long as Park keeps her performance at the same level as what we found in the first episode, where she makes stealing sperm from her own clinic actually look like a sympathetic act, the story will be worth following.