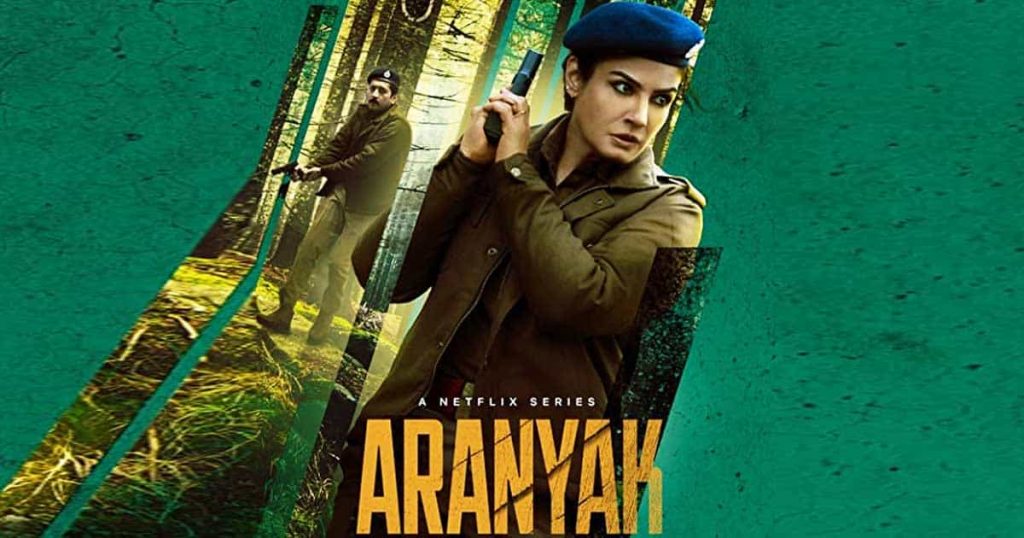 After a long hiatus since the enjoyable ‘Maatr’ in 2017, Raveena Tandon makes a grand comeback in the taut, suspenseful ‘Aranyak’ which premiered this weekend on Netflix. The legendary Bollywood actress ably anchors a mazy whodunit that keeps you guessing till the very end.

The Indian obsession with thrillers set in hill-stations continues even after similar themes used in Sony Liv’s Undekhi (2020), Amazon Prime’s The Last Hour (2021)Voot Select’s Candy (2021). Set in the picturesque snowcapped hills of rural Haryana, ‘Aranyak’ follows the journey of two police officers as they look to hunt down a dreaded serial killer.

However, Aranyak scores over the afore-mentioned series’ by generating immense suspense at the end of each episode and finally, tying together its myriad characters and plot points to form a breathtaking tapestry of a climax. The series is a beautiful blend of inter-connected themes depicting marital troubles, political machinations and investigative prowess all without missing a beat.

Aranyak derives its title from a famous Bengali novel by Bibhutibhushan Bandopadhyay, literally translating to ‘of the jungle’. And true to its name, the series paints an intricate display of how it is the human beings in the hillside town that are to be feared more than the wild animals in the forest bordering it.

Raveena Tandon nails the Haryanvi accent and oozes gravitas as the tough-as-nails cop ‘Kasturi Dogra’ while Parambrata Chatterjee is an absolute revelation as the troubled but moralistic officer ‘Angad Mallik’. It was an absolute delight to see the super-talented Chatterjee being given an impactful role, long after he delighted us in Kahaani (2012). Hopefully, with this performance, Bollywood takes note of his talents and grants him better roles.

Ashutosh Rana seems to get better with age and follows up his recent Filmfare OTT Award for Best Supporting Actor (for Pagglait) with another sensational performance as the archetypal ‘retired cope still haunted by the killer that got away’. Despite the oft-repeated character arc given to him, the seasoned actor generates his own distinctive style and nuance to the performance, that keeps us fully locked in.

Zakir Hussain is expectedly terrific as the doyen of the village’s politics while the teenage actors Tejaswi Yadav (the Joffrey Baratheon-esque ‘Kanti’), Taneesha Joshi (‘Nutan’) and Wishvesh Sharkholi (‘Bunty’) delight with performances that belie their tender age.

Director Vinay Waikul threads the needle by managing to satisfy the viewers with just enough closure for season 1 while leaving just enough open threads and unanswered questions to keep us hoping for a season 2. A fine OTT debut from Raveena Tandon! Recommended.