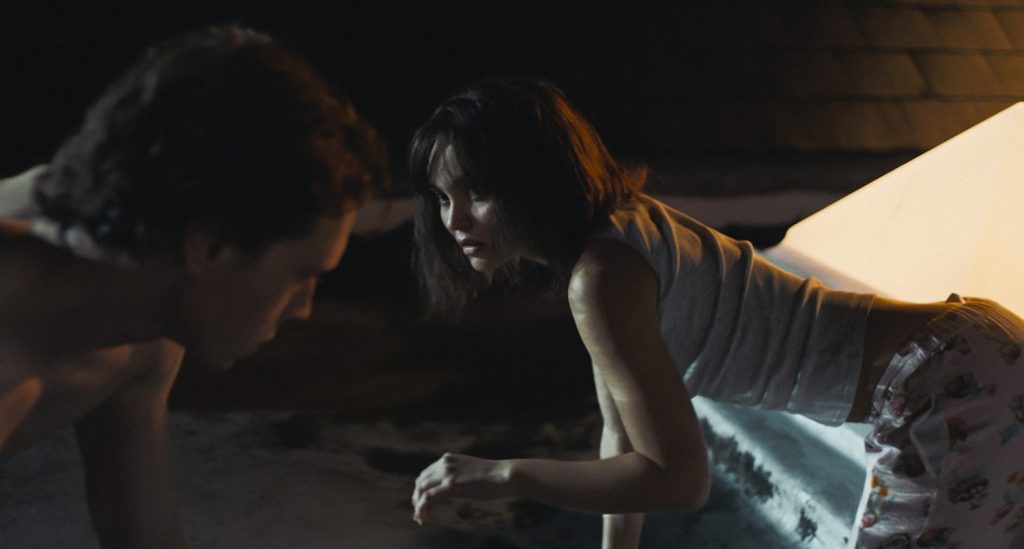 It’s clear from the opening moments of Nathalie Biancheri’s remarkable sophomore narrative outing “Wolf” that there’s exactly one thing on the menu: full commitment. When the drama kicks off, star George MacKay is already immersed in his character, a young man who believes he was born in the wrong body (read: a human one) and is attempting to more fully connect with his true identity, that of a wolf. As a naked Jacob (MacKay) writhes and stretches in a patch of sunny forest, sniffing the air, taking in the splendor around him, seemingly far away from anything rooted in the human world, “Wolf” establishes its aims, both in terms of tone and emotion. It’s a risk, surely, but one that both MacKay and co-star Lily-Rose Depp are more than up for.

So is Biancheri. A former documentary filmmaker who was initially drawn to the thorny subject matter of “Wolf” — “species dysphoria,” an umbrella term applied to a disorder in which individuals believe they have been born into the body of the wrong species, though one not currently part of the Diagnostic and Statistical Manual of Mental Disorders’ listings — because of its real-world implications, Biancheri here uses the concept to deliver a deeply empathetic, thought-provoking film rife with more universal questions.

The sense that something is very wrong with the many characters like Jacob — that, as one patient in the clinic he’s carted off to by his shell-shocked parents explains, “I don’t live in the body I should” — will inevitably draw many comparisons, particularly to issues experienced by trans people or those who have undergone gay conversion therapy. But “Wolf” works because its unique story, while still rooted in a known disorder, blows out its ideas in such fantastical fashion that it can’t help but inspire empathy. Why does it matter that Jacob thinks he’s a wolf? What impact does that really have on anyone else?

As the pain Jacob and his fellow patients feel grows, as their journey becomes more poignant and painful, such questions can only lead to greater understanding. If movies are, as Roger Ebert once famously said, machines meant to generate empathy, “Wolf” is precisely that.

Biancheri’s script imagines a world in which species dysphoria, something to be “corrected” or “cured,” is widespread enough to inspire the creation of clinics like the one belonging to “The Zookeeper” (Paddy Considine, in fine, fearsome form). When Jacob arrives at the facility, it seems like the last resort for him and his well-meaning, if misguided parents. The scenes that open the film, of a naked and free Jacob, pepper “Wolf,” and it’s not clear until the film’s satisfying ending when they actually take place, and what they actually mean. Has Jacob been packed off to the so-called “Zoo” because he was found cavorting, as a wolf, in a neighbor’s backyard? Or, perhaps, did something worse happen?

MacKay, already known for his full-bodied dedication to his roles (hello, “1917”), turns in the best performance of his still-rising career. Jacob is a conundrum, a fiercely private person constantly struggling to conceal his emotions, his very self. MacKay’s work here is somehow both restrained and open. We feel his emotions acutely, and given the strangeness of his situation (he thinks he’s a wolf?), the actor must tap into profound reserves to sell this. He does. Despite some initial hurdles, the odd flirtation with humor, and some overwrought moments, MacKay sells Jacob utterly.

He’s well-matched with Depp, who plays the mysterious Wildcat (you can guess which animal she identifies with), a fellow patient who has been living at the clinic for so long that she’s managed to slip into a strange hinterland, afforded certain privileges but clearly not “well” enough to leave. Depp’s feline-looking face is an almost too-spot-on fit for her identity — crazy-clever casting — but she also manages to believably contort her body when needed, slipping right into cat mode without missing a trick. A pivotal scene in which Jacob and Wildcat assume their animal identities together — much sniffing! such circling! — speaks to the strength of their commitment: it only works because they never doubt what they are. But what does that mean for their future?

The pair are joined in the Zoo by a motley assortment of other patients — the sweet boy who thinks he’s a dog, the mean guy who identifies as a bear, the quiet girl who has long thought of herself as a spider — along with doctors and nurses both helpful and harmful (Considine terrifies, Eileen Walsh’s frazzled therapist wonderfully rankles). Joe Fallover’s fascinating production design further sells the uncanniness of the situation, building clinic rooms meant to both badly approximate nature (fake trees, fake grass) and fully remind of prison cells (cold, empty).

While “Wolf” occasionally tips into melodrama, the kind of tones that seem to accompany more “traditional” stories of bad therapy experiences, those sequences are often immediately followed by more daring, original bits. It doesn’t surprise that Jacob is eventually party to far worse “treatments” or that Considine’s character is prone to screaming at hysterical patients until they break, but it is often intriguing the ways in which Biancheri finds paths out of these familiar storylines. She and her strong stars are never afraid to put on a new coat, to throw on a different identity, to strive to, as one character says late in the film, not just survive, but survive as their true self. Few films have been able to do that so keenly.