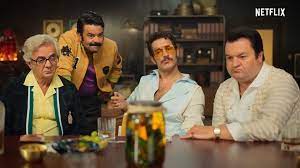 The world of filmmaking is a ruthless industry and waits for no one. Right now on Paramount+ we are seeing the road producers, actors, writers, and even the mafia took in order to make The Godfather a reality. The Godfather ended up being one of the greatest movies of all time, a legend that has proven itself against the test of time. The Offer is a great show, it is entertaining and educational. However, what happens with movies and shows that are not that legendary?

On Netflix there is another show about filmmaking, about trying to do something meaningful, something that people don’t expect you to do. A show about going against the flow of things and carving your own path through the sea of naysayers. That show is titled The Naked Director, a show about an adult director trying to elevate his craft, and find truth in film. The Naked director is emotional, inspiring, and quite funny.

On paper, “The Life And Movies Of Ersan Kuneri” tries to do the same thing as the Naked Director. However, an over reliance on campiness drains the project from any meaningful sense of emotion, inspiration, or excitement. The show also tries to be some sort of comedy, but almost every single moment of effort falls flat, thanks to bad acting and jokes that don’t really translate outside of Turkey.

Stories about filmmaking are rare because it is really hard to convey the difficulties of making a film to audiences through film itself. Connecting with actors and producers, frustration over making art can feel a bit underwhelming and even shallow. As Willem Dafoe tells to his co-stars, “We are not cold miners” and so, any sense of struggle is very hard to translate.

Shows like the Naked Director achieve this goal by making the characters feel real, by exploring their wants and needs, and by making their ambitions understandable enough as to be understood by audiences as well. In The Naked Director we feel what they feel, and we even managed to root for them in their journey, as we want to see them happy with their lives.

This might come to cultural differences, but the comedy just falls flat every single time, the jokes are too simple or just too obscure relaying on obscure references that only people from Turkey might be familiar with. The result is a comedy show that just keeps going with the joke, but no one really knows what they are joking about.

The acting is also pretty awful, and falls prey to the same issues as the comedy element. Every actor knows that they are making a parody, and they never stop. Not even one moment to convey any sort of meaning through their acting, they are in full comedy mode all the time, and comedy is all about peaks and valleys. The comedic momentum cannot last forever, but this show doesn’t seem to know this.

Production values are fine, most of the costumes and sets work in line with what the show is asking from them, there isn’t really anything else that can be said about this element of the show. It is fine. Cinematography on the other hand feels flat and makes the sets feel unreal.

Maybe this is the point of the whole affair, to make something that feels like a parody every single moment. But when each of the films that the characters are making inside the show have the same look and feeling as the scenes that take place in “real life” then there’s a problem. What are we supposed to laugh about? A standard comedic formula is the addition of a straight man to bounce the jokes with. There is no straight man element in The Life And Movies Of Ersan Kuneri.

The Life And Movies Of Ersan Kuneri tries to do many things, but falls flat in every single one of them. The series contains 8 episodes of around one hour each, and while it will of course find its audience, the general audience will have a hard time carving through this thing. There are not many things from where to latch on. It is better to just let it pass through.