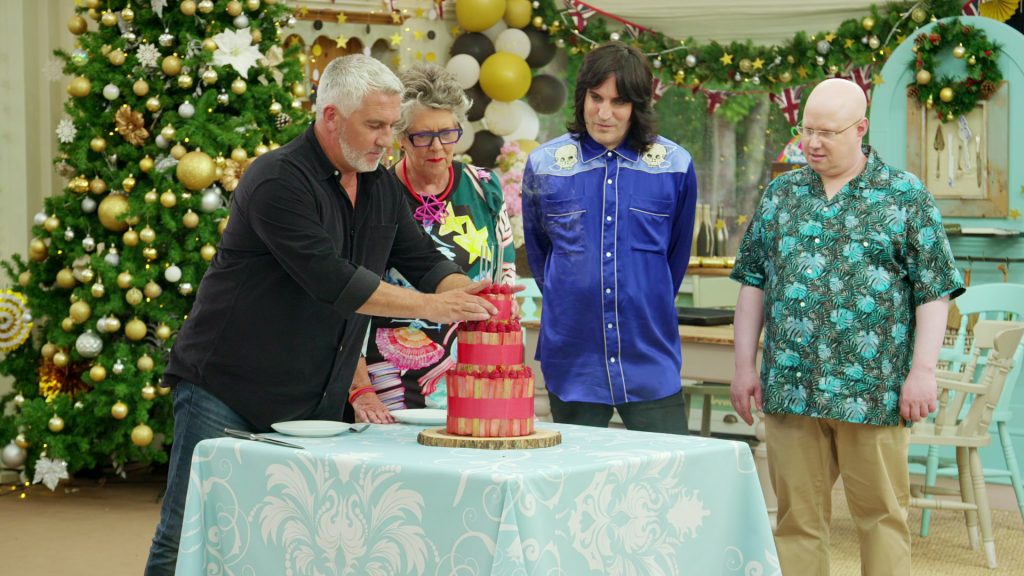 As one of the most popular food shows on TV and Netflix, “The Great British Baking Show” has been a favorite among its fans for a long time. Per Insider, millions of viewers in the U.K. and beyond enjoy watching the series that brings together talented home bakers as they compete in an array of difficult challenges. The show’s popularity has only increased over the years, with thousands of applicants fighting for a chance to be featured every year.

The team behind “The Great British Baking Show” is very thorough. They like to leave nothing to chance, making sure that baking tools — such as, duh, the ovens — are tested every single day to ensure that they’re fully functional, per Mental Floss. They even test Victoria sponge cakes inside the ovens to confirm that they’re in top condition. If you’re a fan, you’ll be happy to know that this precision-grade team — plus your favorite hosts, judges, and more — are making a comeback for the holidays. According to People, Season 4 of “The Great British Baking Show: Holidays” has some interesting developments that are bound to keep viewers hooked.

As reported by People, “The Great British Baking Show: Holidays” will be returning very soon for its fourth round. The date to mark on your calendar is December 3. That day, all episodes will be available for streaming on Netflix, where you’ll be able to binge-watch as judges are treated to delicious bakes that are perfect choices for the winter season.

Here’s an interesting fact: The show’s second “Holidays” edition in 2019 was highly praised for its entertaining content. Per Decider, what worked especially well for the show was that a few popular bakers made a comeback on the special, such as Andrew Smyth and Jane Beedle from the seventh season, Steven Carter-Bailey from the eighth season, and more. For viewers, it was like meeting old friends after a long time away, which made it a definite hit. It also helped that the participants were genuinely talented bakers who were highly skilled in the kitchen — and that the show was perfect for the holidays because it was filled with plenty of good vibes and wholesome cheer.

The structure of the episodes will be similar to what was seen in previous “Holidays” series, with two episodes titled, “The Great Christmas Baking Show” and “The Great New Year’s Baking Show.” However, Hollywood suggested that the baking rounds in Season 4 will be as difficult as ever. Why? Referring to the New Year’s special, Hollywood remarked, “For this episode we had two past winners, and we wanted to push them to see what they had learned since their last time in the tent.” Check out the trailer on YouTube to get a feel for what’s to come, such as a “festive feast illusion cake” designed to look like a full holiday meal.

Per the show’s website, comedians Noel Fielding and Matt Lucas typically host “The Great British Baking Show.” For one episode in this “Holidays” season, however, comedian Tom Allen will also step in to host alongside Lucas, People reports. As for the contestants, there are some really popular familiar faces to look out for: Jamie Finn and Rosie Brandreth-Poynter from 2019 will be accompanied by Ruby Bhogal from 2018 and James Hillery from 2017 on the Christmas episode. In the New Year’s edition, things will get extra competitive as two previous winners from “The Great British Baking Show,” Nancy Birtwhistle (2014) and Dr. Rahul Mandal (2018) go head to head. They’ll be joined by two participants from 2019, Henry Bird and Helena Garcia.

But wait, there’s more. Talented guests will also be showing up to entertain viewers, such as singer Alexandra Burke, who will perform a cover of “Silent Night” on the “The Great Christmas Baking Show.” Judge Paul Hollywood is genuinely happy to see so many former participants once again. He said, “It is always lovely to get old bakers back in the tent. … It’s like seeing ghosts from Christmas past, and I have to say it takes a lot of bottle to come back into the tent.”

Netflix is ringing in the holiday season with a trailer for their upcoming premiere of The Great British Baking Show: Holidays. The fourth installment of this holiday classic, which is set to premiere on the streaming service December 3, will bring back the familiar faces of several fan-favorite all stars from previous seasons to battle it out and find out who is the very best holiday baker once and for all… or at least until next year.

In the trailer, we see judges Paul Hollywood and Prue Leith along with comedic hosts, Noel Fielding and Matt Lucas, as they welcome back the “ghosts of bakers past” to the big tent for another round of holiday bake-off fun. Many of the returning bakers spoke of how great it was to be back in the tent and how it felt like they “never left.” The crafty culinary artists will be hit with new challenges as their baking skills are put to the test.

One of the competitions, in particular, looks like it will push the bakers to the edge. In a preview for a showstopper challenge (the final challenge of the week that usually asks bakers to create a flashy baked delicacy), they’ll need to make a “festive illusion cake,” that is, a cake that looks like something else. In the preview, an unseen baker presents a full turkey dinner cake complete with sides including peas, carrots, mashed potatoes, cranberry sauce, and even a gravy in a gravy boat, all presumably made out of pastry.

When Netflix picked up the English created series, it became an immediate hit for Americans. Coming from a world of high-energy, cutthroat cooking competitions, it was refreshing for many to see the relaxed bakers that were happy to help each other out when the timed challenges were ticking down. The show has undergone several personnel changes including the departure of Hollywood’s original co-judge, Mary Berry, along with the beloved and much-missed original co-hosts, comedy duo, Sue Perkins and Mel Giedroyc who now star in their own show, Hitmen, which is in no way related to The Great British Baking Show. Despite the hosting and judge shakeups, the show has still been able to make it work bringing in fresh faces that add their own flair and comedic stylings to the series.

With the fourth season of this holiday tradition quickly approaching, get ready to sit on the couch with a bag of chips, screaming at the TV as the bakers get soggy bottoms and compete to see who will be crowned the top baker of this delightful holiday spinoff. Check out the full trailer below.