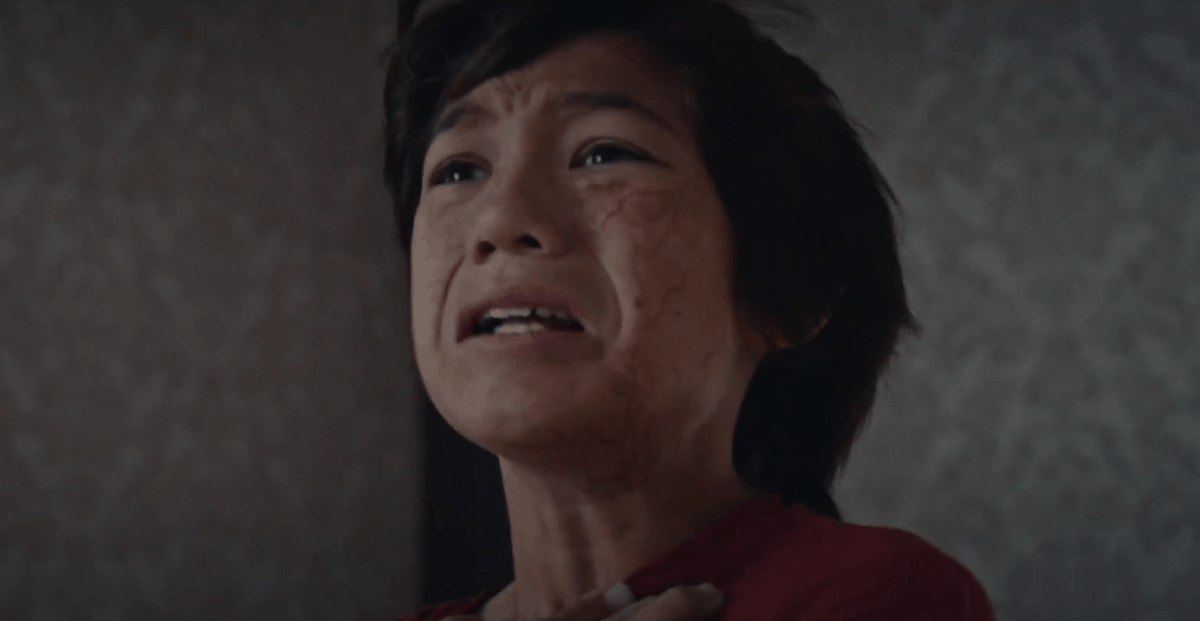 A mute boy is trapped in his apartment with a sinister monster when he makes a wish to fulfill his heart’s greatest desire.

In The Djinn, young Dylan Jacobs (Ezra Dewey) doesn’t have life easy. He’s a mute (bearing a nasty Y-shaped scar across his chest indicating surgery or injury), resulting in anxiety when attempting to make some friends. Compounding Dylan’s pressure is abandonment issues stemming from a recent family tragedy involving his mother (that unspools throughout the movie as a flashback). After hinting at sinister events, the story picks up a few months later in the autumn, where Dylan and his unnamed dad (Rob Brownstein) have packed up to start over in a new home, which is yet another complication on the front of making friends. Nevertheless, the boy’s father remains affectionate and reads bedtime stories such as Pinocchio, a rather on the nose parallel.

It’s unclear whether Dylan’s dad is starting a new job or not, but he’s off to work a double shift all night as a radio DJ after settling in. Alone and curiously roaming, Dylan uncovers something called the Book of Shadows, which essentially states that anyone can make a blood sacrifice at a specific time and under particular circumstances in exchange for one’s greatest desire. Naturally, Dylan would like to be able to speak (he’s at an age where connecting and making friends is already tricky and doubly so with a disability, so his frustration is palpable)

As to be expected, it’s not as simple as giving over three droplets of blood. After some requisite loud noises that don’t necessarily scare much, it becomes clear that the titular djinn (which in Arabic mythology is a demonic genie that crosses over from the Shadow Realm and takes the form of other human beings and living things) is going to make Dylan work for his wish—putting up a fight as a recently deceased convict and the previous owner who died in the home. The djinn also gets personal by transporting Dylan back to the traumatizing summer night that changed everything. Intriguingly, none of these entities have capable eyesight and use echolocation to locate Dylan, making for a battle between the deaf and the blind.

The writing and directing team of David Charbonier and Justin Powell (each also takes on other responsibilities such as editing the proceedings into a tight 80-minute running time or the claustrophobic and spatially aware production design) also take advantage of a 1989 time period to limit Dylan’s survival resources. Some landlines stop working, and even when he does get creative trying to smash open one of the windows, his escape fails at the hands of supernatural forces. What ensues is a hide-and-seek game proudly boasting Evil Dead influences accompanied by legitimately creepy makeup effects. Ezra Dewey also delivers an impressive newcomer performance, especially during moments of pure terror and physical struggle where he is expressing screams with nothing sonically coming out.

In between the various confrontations, Dylan starts reading from the book once again only to find out that there’s a whopping number of rules for having his wish granted. Thankfully it’s a massive exposition dump that doesn’t waste anyone’s time, especially considering the filmmakers don’t seem concerned about following the internal logic presented. It should be no surprise that the most potent material here forces Dylan to accept the reality of his mother’s actions and let go of the guilt he is harboring. As more of that dynamic is revealed, it gradually becomes genuinely emotional without inadvertently dipping into exploitation or disrespectful territory. The Djinn Is still a tad overstuffed with ideas (the convict is a random person that died escaping prison, and that’s all we learn) but excels where it matters most; thrills, scares, and an empathetic, resourceful lead that fights back just as much as he flights.