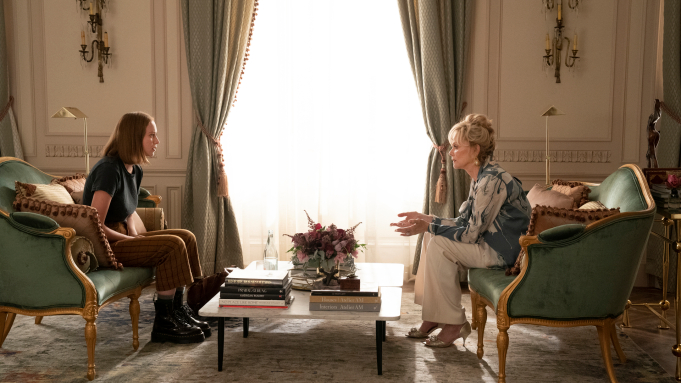 The new HBO Max series from the Broad City producers is the rare show about the business of comedy that actually manages to be funny.

It’s not easy to make a good TV show about comedy. (RIP: I’m Dying Up Here, Studio 60, the first few episodes of 30 Rock where they still focused on The Girlie Show). There’s no quicker way to drain the humor from a situation than to deconstruct all the work that goes into making said situation humorous.

“If you start a sentence with, ‘It’s funny because…,’ then it’s probably not,” sniffs veteran Las Vegas comedian Deborah Vance (Jean Smart) to her surly new twentysomething writer Ava (Hannah Einbinder) in Hacks. At the risk of offending Deborah, this HBO Max series is funny (and moving, and weird, and smart) because it focuses not on the arduous process of crafting jokes, but on the hilarious, gifted, and deeply flawed women who tell them.

Deborah Vance is known as “the queen of Las Vegas.” She’s got a record-breaking residency at the Palmetto Casino, a Sin City street named in her honor, an enormous mansion all to herself, and a line of “luxury” products (from fuzzy slippers to bath caddies) that mint money on QVC. But when the Palmetto’s owner (Christopher McDonald) says he needs to bump Deborah’s weekend shows for fresher, younger-skewing acts like Pentatonix, she’s on the verge of losing the only thing that really matters to her: Being on stage.

A few hundred miles away in Los Angeles, Ava Daniels pleads with her agent, Jimmy (Paul W. Downs), to salvage her nascent TV-writing career — which she managed to tank with a series of unfortunate tweets. Faced with one unemployable client and one top-earner who desperately needs some new material, Jimmy gets them both off his back with a pragmatic brainstorm: Ava will move to Las Vegas and help Deborah Vance punch up her act. Naturally, it’s disdain at first sight. Ava is a self-aggrandizing, twentysomething comedy snob who says things like “traditional joke structure is very male,” while Deborah is a set up-punchline purist who isn’t about to let some “plucked off the Internet” newbie tell her what’s funny.

Veteran-vs.-upstart is a fairly standard character dynamic, but for Hacks — created by Broad City alums Downs, Lucia Aniello, and Jen Statsky — it’s just an entry point. Ava and Deborah are both funny women, but their world views and lived experiences are so divergent, they can barely understand the fundamentals of each other’s existence. It’s only after Ava hurls a devastating insult at Deborah during their disastrous first meeting that the legendary comedian sees something she recognizes: A brilliant, sharp-witted young woman fighting for her place in a cutthroat industry.

Once hired, Ava finds that she’s just another body in Deborah Vance’s orbit — along with her Chief Operating Officer, Marcus (Carl Clemons-Hopkins); her assistant, Damien (Mark Indelicato); her housekeeper, Josefina (Rose Abdoo); and her feckless daughter, DJ (Kaitlin Olson). When they do sit down to write, their brief pitch sessions generally devolve into inter-generational explainers (Ava fills Deborah in on wikiFeet; Deborah educates Ava on progesterone supplements) before ending abruptly.

Hacks (premiering May 13) is far more interested in exploring why these women are funny. Deborah’s personal life is pop culture lore — a headline-grabbing divorce from her husband/70s sitcom costar, followed by an arson scandal — but the reality is much more poignant than the “hell hath no fury” narrative that exists in the public domain. HBO Max made six of Hacks‘ 10 episodes available for review, and each one reveals a little bit more about Deborah’s life, her relationship with her daughter, the sacrifices she’s made to build her empire. The show excels in these small moments of discovery. And Smart, the reigning Meryl Streep of tough broad types, excels at absolutely everything. In episode three, Deborah delivers a scathing lecture to Ava about the true price of success (“You have to scratch and claw, and it never f–king ends!”) before boarding a helicopter with a breezy, “My ride’s here!” Later, Deborah places a newly acquired antique pepper shaker into a display case, and the expression on her face slips so gently from quiet satisfaction to melancholy solitude that my eyes filled with tears. Only Jean Smart, kids.

Einbinder, an L.A.-based stand-up comic tackling her first leading role, is immensely appealing as Ava. With her precision timing and bored California drawl, the actress brings such compelling confidence to her entitled, condescending character that it’s all the more effective when Ava finally begins to face some hard truths about herself. “Good is the minimum,” Deborah snaps at her. “You have to be so much more than good.” The same is true for TV shows, and Hacks is well on its way.