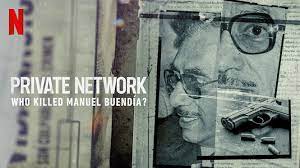 Who Killed Manuel Buendia – and why?

Private Network: Who Killed Manuel Buendia is an interesting and in-depth examination surrounding the shocking death of renowned Mexican journalist, Manuel Buendia. Shot in the back four times, Buendia’s death sent shockwaves through the journalism world.

Clocking in at 100 minutes, Private Network sets out to uncover who killed this man and why. Across the run-time, we learn more about who Manuel is and what made him such a prolific journalist.

After some early career highlights, the documentary then centers around Buendia’s more thorough investigations into drug trafficking, the Mexican mafia and the CIA.

Most of the focus here is on Buendia’s time writing for Red Privada (Private Network) where he rose to infamy on the back of his controversial articles – including those looking at organized crime. Buendia was certainly no stranger to death threats though, and he was well-known to carry a pistol on him at all times.

The death itself is investigated thoroughly and by the end there are people convicted with his murder. But is that the end of it? Well, if the interviews at the end of this are anything to go by, the case is still out as to whether the right people were caught or not.

As one may expect, there’s a litany of different archival photos and newspaper clippings dotted throughout the film. There’s also a number of face to face interviews along with a unique but thematic establishing shot of using typewriter keys between each key scene in this film. This makes sense given Buendia’s writing, punctuated by establishing text as the documentary marches through the journalist’s life. It’s a small touch but one that’s certainly welcome.

The one stylistic element that’s a bit more subjective though comes from the background music. Personally, the string segments and the choice of different instruments (including a harp at one point) feel tonally jarring against some of the more heavy-hitting material. In fact, at times it actually feels quite distracting.

Still, true crime fans should find enough to like here, and while it’s not quite as stylish or engrossing as today’s other crime offering Heist, there’s enough here to like nonetheless.