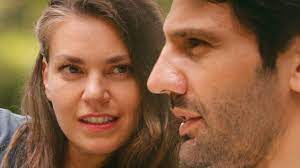 Melisa (Asli Enver) has five months to live, give or take a month. She walks out of the doctor’s office fresh with the bad news and stops. She closes her eyes and imagines herself on a beach looking pensively out upon the ocean. Compounding the tragedy is the fact that she and her six-year-old son Can (Mert Ege Ak) are inseparable. His father is out of the picture, although the boy treasures a photo of the three of them from years ago. She’s a single mother in a small Istanbul apartment, sharing a bedroom with the boy, a curtain separating their beds. She waits tables, and he sits quietly in the corner of the restaurant. They walk to school, and they briefly part, innately aware of where the other is on either side of a tall concrete wall; he runs back to her. She doesn’t make him go. Why should she? Their time together is short. Whatever her unspecified ailment is, it hasn’t taken a physical toll on her yet, and the kicker is, Can doesn’t know his mother is dying.

But Melisa must face the inevitable. Fatos (Ezgi Senler) is her co-worker, close friend and confidant. She offers to take care of the boy after… you know. Melisa brushes off the offer for reasons unknown. Fatos scrolls through photos on a dating app, encouraging Melisa to maybe go hang out with a human male her own age for a change. Maybe it’s not a terrible idea, although it becomes one when Melisa wonders if she should start dating and maybe find someone to be Can’s guardian, which seems like a lot to ask of someone who’ll get a few months to acclimate to the situation and subsequently watch her cough a lot until she’s gone, but that’s just a consideration you or I might make, being logical people. We’re not sure if Melisa takes the notion seriously, but there it is, floating through the plot.

One day in a cafe, an impatient man in line behind Melisa and Can treats them like crap. Total creep. Chode city. He’s Firat (Kaan Urgancıoğlu), a wealthy playboy who Melisa sees again at the newsstand, staring up at her from a magazine cover. He’s a bicycle magnate, I think – it’s never made clear. She keeps seeing his face here and there, which she interprets as a sign. She seeks him out at a nightclub and he recognizes her and says mean things to her. They do about five vodka shots each and somehow remain upright and clear-headed. They sit together at the end of a dock and have a lovely evening, but doesn’t sleep with him, and seems to have forgotten that he’s a boorish jackass who tends to treat women like tissue – use once, throw away. What gives? Does she see something in Firat that we don’t? Apparently, and that manifests as they see each other more and takes a shine to Can, turning his insult – “little monster” – into a term of endearment. Is this really going to work? Is Firat going to be Can’s dad now? IF ONLY IT WERE SO SIMPLE.

In Good Hands might be a nice character-driven picture with strong performances and assured direction if the plot didn’t keep getting in the way. It’s almost fascinating to watch Enver and Urgancioglu worm their way around and through the broader contrivances of their characters – the illogic of her pursuit of this jerk, his grating arrogance – to find a sincere moment or three. But a bevy of contrived junk ranging from sitcom laffs to soap opera twists and heavy-handed symbolism frequently derail the operation.

Case in point, a subplot in which Melisa and Can collect toilet paper to the point where an entire room of the apartment is stacked floor-to-ceiling with the stuff. It defies pragmatism to the point of outright absurdity. Melisa’s an artist, so one wonders if it isn’t part of a project, but no, it has A Reason, and it’s not pandemic PTSD, but an uber-hokey one even in the context of a six-year-old’s sense of logic. That’s just one example of a few major implausibilities in this story, which, if it calmed down a little, might allow us to better understand and get to know the people in it. The cast is game, we’re game, but why isn’t the screenplay? It’s like it has an idea of what a movie should be, and forces drama and comedy into it instead of following the characters intuitively and flowing a little more like real life. When the movie allows that to happen, it’s thoughtful and sweet, but those moments are far too fleeting.