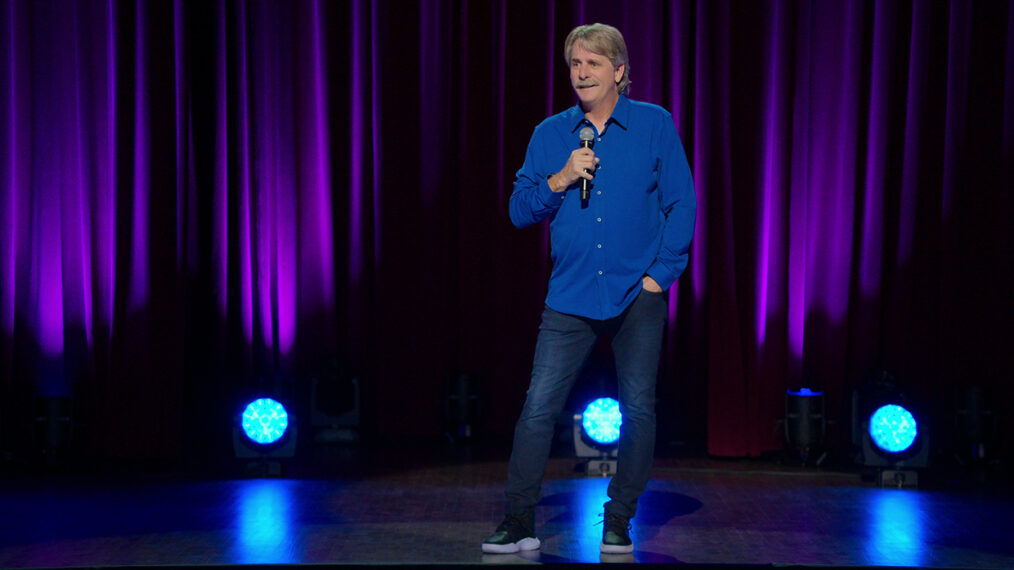 My parents raised me—for better or worse—on the comedic stylings of Jeff Foxworthy. First with The Jeff Foxworthy Show and then with the Blue Collar Comedy Tour. I remember social scenes in The South™ ringing with the rejoinder “you might be a redneck…” for years on end, like a never-ending wave of cicadas. Foxworthy created this movement; it began as observational humor, morphed into well-worn self-deprecation, and around 2004, became a weird touchstone of White Trash Pride. As a redneck, you were owning the joke, sucking all the poison out of the stereotype before it was ever used against you. I don’t care what you think of me, these jokes seemed to argue. I know who I am.

They are also the only “you might be a redneck” jokes you’ll be hearing today. In Foxworthy’s new Netflix stand-up special, The Good Ol’ Days, which began streaming March 22, there’s not a single one of his signature jokes to be had. Instead, for his first solo stand-up show in 24 years, Foxworthy stays focused on the simpler times that came before, repeating that phrase—”the good ol’ days”—ad nauseam over the course of the hour-long runtime. Curiously, everything else about Foxworthy remains the same: a jewel-toned button down, the dignified mullet, the mustache of a cousin of Dale Earnhardt.

Is a change of material bad? Not at all. But early on, what becomes clear is that Foxworthy hasn’t shifted gears so much as he’s stripped the material of meaning. Nothing in Foxworthy’s set is political or cancel-able, topical or modern. It’s focused on the nondescript time in his life he calls the good ol’ days, but without commentary or perspective. Time will tell if it works for the broader audience, but if I may take my own swing at the joke format, in the good ol’ days, Jeff Foxworthy had something to say.

In the quarter century since Foxworthy last had a stand-up special, he’s stayed consistently relevant, forming the bawdy, yet family friendly Blue Collar Comedy group, which spawned a series of noteworthy deals. Somewhere along the way, Foxworthy landed hosting gigs on Are You Smarter Than a Fifth Grader? and The American Bible Challenge. And it feels like those series, saccharin and populist-approved, serve as (intentional or not) key influences for his new material, ultimately sucking the liveliness out entirely. In the first few minutes of this new special, Foxworthy opens with the briefest of remarks on the COVID-19 pandemic, catching us up on how lockdown was for him. He realized his breath stinks, because of masks. He’s become a grandfather. His wife talks far too much and always pees on road trips (women!).

Foxworthy dances around some valid points about technology and what looks to be a fraught future, but instead of offering any personal insight or emotion about what it’s like to be dealing with these things in your 60s, he always falls backward towards broad strokes and cliche. A proud Boomer, he turns to stories about simpler times with corded phones and encyclopedias. (The upside of nostalgia jokes is that they will always be relevant with that Boomer crowd. The downside is that with every passing year, there are less and less of them.)

Foxworthy’s audience has always, by nature of the material, skewed to the more conservative side of the party lines. That is probably intimidating in a comedy landscape that is filled with overtly political commentary and the ever looming threat of cancel culture. To me, that’s no excuse to back off now. Whether Foxworthy would admit it, his work has always been political. Those redneck jokes were funny, but they were also teeming with commentary about the working class of America. And Foxworthy was always at his best when he was talking about what he knew. He used his own life and blue collar background as a jumping off point, oftentimes making light of the very points we didn’t have the vocabulary for ourselves. The best part is that it belonged to the people who lived it—the rednecks and redneck-adjacent. If some “big city liberal” didn’t get the joke, that was half the point. They’re not in the club.

Foxworthy carved out a place in 80s and 90s comedy talking about working class families trying to make ends meet with a little bit of love, some cheap beer, and a touch of self-awareness—not unlike another comedic legend, Roseanne Barr. But where Barr became a political pariah and brash media presence, Foxworthy went the other way entirely: plain Jane territory. White toast central. In The Good Ol’ Days, there is no nuance; no originality. It feels more like a catch up with a man whose work used to be a must-hit topic at every good family barbecue.

Maybe he thought in 2022 there was no space for the word redneck. Maybe he’s just bored of the idea! The lack of the previously favored buzzword isn’t the cardinal sin of the new material, anyway. Rather, The Good Ol’ Days flops because it misses the tongue in cheek punch that so often would come after it; the willingness to say something about being a touch trashy, skewering yourself or the people you’re talking to without ever losing control of the conversation.