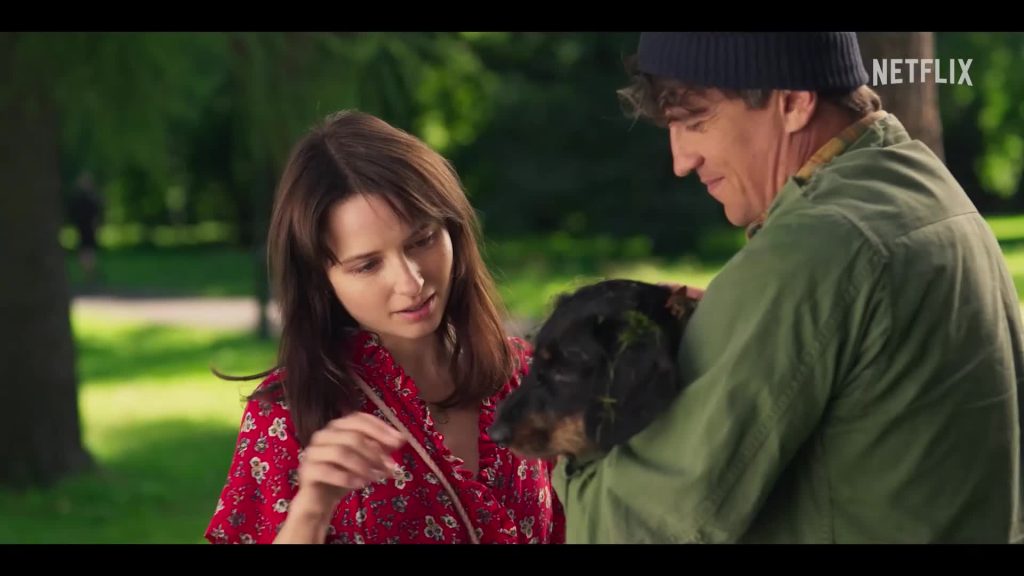 You’d think nobody on this planet would be afraid of adorable little goofy woofy little bark-bark weiner dogs, but there’s an exception to every rule, isn’t there, and in this case, it’s Magda (Anna Prochniak). She once was bitten by a dachshund, the genesis of an irrational phobia that will rear its head in this plot when, and only when, it really needs it. Case in point, Magda’s big day: She’s in line for a promotion to programming director at a highfalutin Warsaw TV network, after which she and Dawid (Kamil Szeptycki) will get married and her whole life will continue according to her exacting plans. But her failure to keep an eye on the boss’ beloved dachshund Todd, who wolfs down a giant cake and gets deathly ill, results in her being fired – and wouldn’t you know it, milliseconds later, she sees her fiance kissing another woman. Kablooey, goes her life. As the old saying goes, the best laid plans are inevitably waylaid by ridiculous weiner dog-related circumstances.

Meanwhile, in Krakow, a moppet child named Karol (Iwo Rajski), his goofy tombstone-carver/artist dad Krzysztof (Michal Czernecki) and their bearded dachshund Trombone are major players in the city’s annual dachshund parade, which, if I’m interpreting this batshit-incoherent plot correctly, is such a big deal, the media wants to cover it but organizers just won’t let ’em. There has to be a way for Magda to be wedged into this scenario so she can get the INSIDE SCOOP on the coveted dachshund parade and salvage her job, right? Right. So she ends up renting a room from Karol and Krzysztof and Trombone, and volunteering to help them organize the event. Her involvement inspires a sequence in which she must learn to acclimate from her hectic Warsaw life-tempo to the meandering dilly-dally pace of existence in Krakow, and navigate the city’s byzantine municipal bureaucracy in order to obtain event permits – a sequence that lasts a hair shy of forever and yields one single solitary lonely wheezy joke.

Of course, only a terrible person would exploit a moppet boy and his scraggly dog and his widower dad. So is Magda a cretin or what? Nah, but maybe a little. She keeps her agenda secret, and not only helps Karol in his attempt to land a date with his crush, and makes cutesy eyes at the imminently available Krzysztof, but also has very little problem with Trombone, so we can only assume that her phobia went up in flames along with her old life. Now, if this scenario isn’t ripe and ready for comic misunderstandings, mischievous colorful supporting characters sowing chaos and cutey-wutey antics from doggy-woggies, I don’t know what is.

Heart Parade cobbles together the bromidic fodder of hundreds of rom-coms before it – there’s no doubt whatsoever about the outcome of this DOA plot – with a premise that aims for wacky but comes off noodle-brained, jokes landing like wet spaghetti on the linoleum. It’s not confident enough to really lean into its absurd premise (remember, THE MEDIA IS BANNED FROM THIS DACHSHUND PARADE), it skimps on the cute-animal porn and it feels like 40 minutes of story stretched to 108. To call it meandering is gross understatement. It spins its tires, it falls into the tar pits, it’s paced like continental drift.

And the characters? They’re all types: The Fast-Paced Career Woman Who Learns to Slow Down, the Grieving Widower, the Runty But Spirited Little Boy, the Crazy Neighbor Lady, the Smirking Jackass Fiance, the Grieving Widower’s Eccentric Friends and Co-workers, etc. They barely exhibit rough approximations of recognizable human behavior as they navigate a story so artificial, it oozes with caramelized Sweet ’N Low. After a half-hour, you’ll be hard-pressed to care; now imagine sitting through the whole shebang.