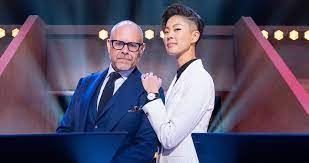 A dark stage, with different lit-up versions of the Iron Chef knives logo. A spotlight shines on The Chairman (Mark Dacascos). Alton Brown enters the frame, tossing an apple. “So… feeling hungry, old friend?” Brown asks him. “Hungry… for battle!” yells The Chairman.

In the first episode, chef Mason Hereford, a New Orleans restauranteur who concentrates on upscale sandwiches and elevated comfort food, goes up against Stone. The challenge that both chefs and their teams face: Create five street food-inspired dishes, using the secret ingredient: “LAAAAMB!”, as The Chairman yells it.

The chefs and their teams have an hour to create all five courses, but the first course needs to be plated and in front of the judges in 30 minutes. And, because street food is usually made over fire — or “FIIIIIRE!” — each course has to be partially cooked by fire, and fire needs to be part of the presentation of the final course.

What we appreciated about Iron Chef: Quest For An Iron Legend is that the show isn’t generally trying to reinvent itself with the move to Netflix. Brown is still host. The Chairman still yells and kicks. And it’s still a challenger versus an Iron Chef in each episode. There’s a little bit of goofiness, and lots of bantering between the competing chefs and their teams, the judges and the hosts. But it’s not like anyone hauls off and curses up a storm or anything like that. Until the final episode, where the best challenger competes against all of the Iron Chefs, the show is pretty much what people are familiar with.

As always with the American version of Iron Chef, we just wish it wouldn’t take itself so damn seriously. That’s saying a lot, because compared to other cooking competition shows, either those of the Top Chef variety, or anything Gordon Ramsay hosts, or Chopped over at Iron Chef’s former Food Network home, Iron Chef is relatively irreverent.

It’s bombastic and purposely over the top: They call the studio where it’s shot “Kitchen Stadium”, after all. But, as always, it feels like the pure goofiness that the Japanese original had isn’t there. It could be because we’re in an era of chefs as celebrities, but it just seems that there’s an aura of self-importance on this version that the original never had.

Also, as personable as Stone is, aren’t we all a little tried of seeing his smiling face? Ming Tsai has been on our TV screens for almost 20 years, as has Marcus Samuelsson. We get why they were chosen to be Iron Chefs in this round; they have name recognition. But we also know what they’re capable of. It might have been fun to pull from previous Iron Chef iterations, especially from the Japanese original or some of the international editions, to make up the roster of Iron Chefs.