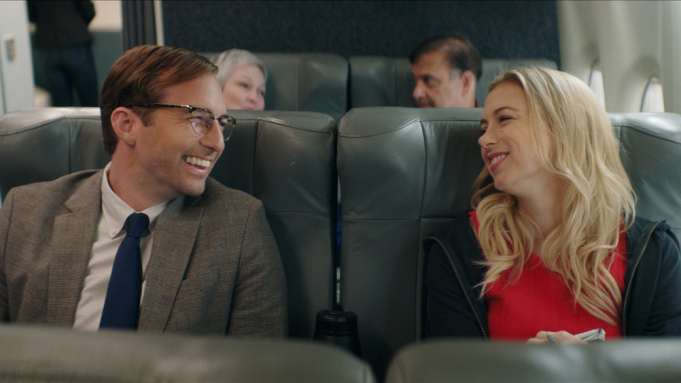 Skilled comedian Iliza Shlesinger is proving to be quite the formidable force for Netflix. After carrying a handful of raucous standup comedy specials, headlining an uproarious sketch show and popping up in supporting roles in “Spenser Confidential” and “Pieces of a Woman,” she returns to the streamer, ascending to leading lady status in her self-penned feature “Good on Paper.”

The romantic comedy, loosely based on her real-life experiences as well as the standup routine that’s innovatively integrated throughout, is centered on a woman who begrudgingly decides to let down her guard when it comes to relationships, only to be confronted with a problematic guy who’s more slippery than safe. Containing razor-sharp witticisms about feminine intuition, gendered sexual politics and relationships (both platonic and romantic), it excels beyond its self-deprecating title.

Thirty-four-year-old Andrea (Shlesinger) has always made her career as a standup comedian and actress first priority. However, the exhaustive audition process and live comedy sets are starting to take a toll on her psyche. She’s becoming disillusioned, jealous and salty, especially when peers like Serena (Rebecca Rittenhouse), an annoyingly over-friendly actress who started out at the same time as Andrea, find the success and stardom she herself craves. And though she has a steadfast best friend in Margot (Margaret Cho) and casually dates himbos, long-term romantic stability has continually eluded her. Until destiny, as deceptive as it can be, finally reveals itself.

A fateful flight brings hedge-fund manager Dennis (Ryan Hansen) into Andrea’s life. He’s not the usual type she finds herself attracted to, since he sports the stereotypical dorky hairdo, horn-rimmed glasses and tweed blazer. But he charms and disarms her nonetheless, engaging in non-threatening banter and helping her with a crossword puzzle. She invites him to her show that evening and the pair hit it off as friends. He seems to be a good guy, keeping up with her hectic schedule, meeting up with her at all hours and helping her achieve her acting ambitions. Things change when he proposes that they become romantically involved. She reluctantly accepts after some time. However, when Margot begins to grow suspicious of Dennis, Andrea can’t silence the nagging feeling he isn’t exactly the upright, forthcoming boyfriend he’s led her to believe.

Shlesinger’s screenplay plays it smart when it comes to Dennis’ deception, up until the inevitable third-act reveal which leaves little room for ambiguity. Director Kimmy Gatewood modulates tone adeptly during the first two-thirds of the picture so that we too question the red flags raised by the duplicitous character. They have fun toying with audience suspicion, much the way “So I Married an Axe Murderer” did, ramping up the inherent comedy of the protagonist and antagonist’s conundrums, while providing hints to the truth. Even before the hijinks and calamity ensue, we fall for the pair as a couple as they gallivant around Los Angeles, bonding and sharing formative memories. There’s a spiraling, outlandish absurdity to Dennis’ manipulative fibs, like seeing him weasel his way off a golf course after professing he was on an Ivy league team, or get out of arranging an introduction between Andrea and his allegedly cancer-stricken mother at his Beverly Hills home.

Hansen and Shlesinger have great chemistry together and individually tether us to their characters. The sharp-tongued comic is in full control of the spotlight, whether it’s performing her live routine spliced into the fictionalized portraiture, or engaging in cinematic catharsis as the leading lady in her own narrative. At once both self-deprecating and delightful, she’s a charismatic presence. Hansen’s own classic Californian good looks cloaked by the false veneer of bad hair and a preppy wardrobe hint at his character’s swindling scheme. He perfectly embodies a wolf in sheep’s clothing, walking a fine line between smarmy and sincere.

While the film offers enlightened commentary on the insidious nature of the lies we tell ourselves and others, its makers deliver a heartening sense of sisterhood without dipping into any cloying or overt sentimentality. Though a man provides the initial catalyst toward our heroine’s change, her maturation is achieved through her own agency. A healthy byproduct of Andrea’s increasingly souring romance is that she learns to be a better person to her female friends and to herself, and not to ignore her intuition. The genre’s standard “you lied to me” moment is integrated seamlessly into the shenanigans and takes on deepened meaning given the subject matter, while Andrea’s ensuing perceived betrayal feels genuinely earned.

Despite demonstrating ingenuity when it comes to flipping the script on tropes and genre trappings, a few sequences might have presented better as ideas in an outline than they do in execution. For example, when Andrea first catches Dennis in his lie that he rents an apartment alone, it stretches credulity that his spurned roommates don’t try to warn her then and there. That talk conveniently comes later on. Contrivances prevail late in the third act in order to get a clever call-back to a story thread involving a billboard Andrea hopes to buy with the spoils of her success.

Since audiences don’t typically expect to walk away learning any lessons from a light-hearted romp such as this, it’s an unexpected life-enhancement that we actually do. The gentle messaging that women should never cast aside their gut instincts when it comes to dating sticks around long after the credits roll. And that’s a concept that resonates even better on screen than on paper.