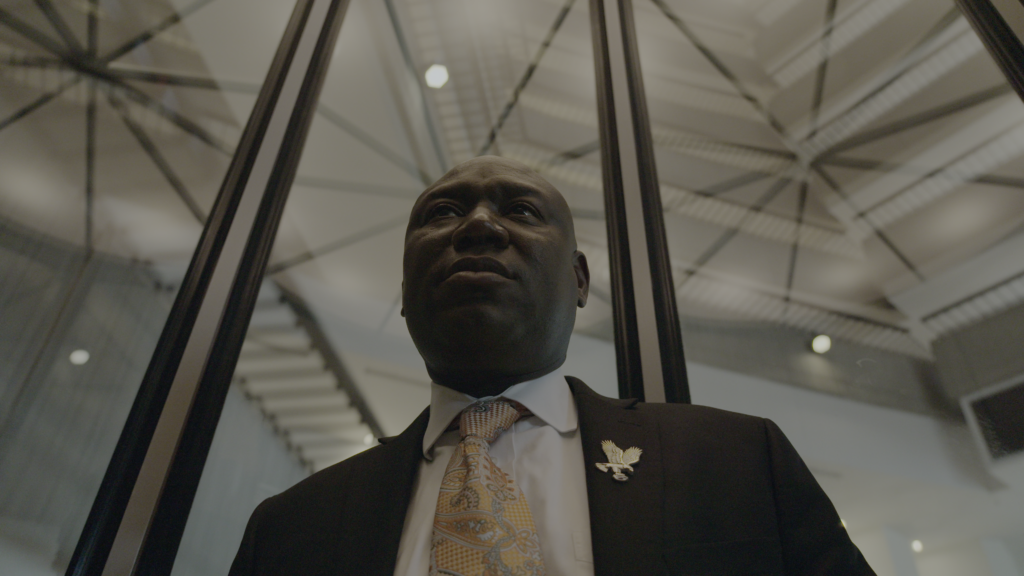 “Civil” takes a mythic approach when introducing Benjamin Crump — the lawyer widely known for representing Black families touched by police killings — presenting him to us in silhouette as he accepts a call from the family of George Floyd, before the movie slowly and skillfully creates a portraiture of his interior life, backed by wistful music. It’s a counter-narrative of sorts, to the many Fox News segments branding him “the most dangerous man in America” (footage that features throughout the documentary), but it’s also an excavation of the ways Crump himself is tirelessly dedicated to writing the counter-narratives of Black people slain by police.

Following Crump across twelve volatile months during 2020-2021, the film may end up on the wrong side of scattered — it takes a number of open-ended detours the longer it goes on — but its approach to the attorney himself is in step with his attempts to humanize his clients during ongoing civil cases. It wrestles, as Crump does, with the paradoxical nature of Blackness in modern America; he lives on the cusp of violence, inundated with constant threats to his life, but even his most human moments exist within the narrow confines of American capitalism. When the law fails to bring criminal charges against murderous cops, he fights for enormous settlements (as practical as they are representative), and even though he’s often accused of benefiting from people’s pain, he states his goal succinctly: “I want to make it financially unsustainable for them to continue to kill Black people unjustly.”

While “Civil” doesn’t explicitly make the connection, its approach to American Blackness within its macabre original context — slavery, a financial one, and the ways this perspective continues to loom — is a risky but effective retort to prevailing right-wing sentiments around police brutality, and ensuing discussions about decorum (whether aimed at rioting, or the “proper” ways to seek restitution). The film initially explores the ins and outs of Crump’s objective, which meets American structures on their own terms. It’s a goal that burdens him with the onus of translating the lives and dreams of victims for public consumption, and of justifying translating those lives into monetary ones and zeroes. There is a gentleness to the manner in which he goes about this, sitting and listening to families in their living rooms, in ways they sorely need, and he often relays each development to his own mother over the phone. The film, for the most part, has no qualms about his genuineness, but it introduces slivers of doubt whenever Crump is confronted by questions, in bad faith or otherwise, about his own profits.

Director Nadia Hallgren takes on the challenge of doing, for one subject, what Crump does for hundreds, and in that, she largely succeeds. Photos and videos of Crump’s childhood and his contemporary domestic life become deeply entwined with his daily practice, where he functions as a sort of door-to-door therapist and minister, guiding and engaging with loved ones still in the throngs of their grief. With oblique editing (by Lindsay Utz, Enat Sidi and Nathan Punwar) that threads the needle between the former and the latter by overlapping footage and sound, Crump’s perspective comes floating to the surface, as a man whose own loving family informs the way he approaches other people robbed of their loved ones.

The narrative is front-loaded with numerous high-profile police killings (George Floyd, Breonna Taylor, Andre Hill, and so on), but it eventually casts a wider net over Crump’s other cases, seeking settlements for corporate malpractice against Black workers who are left with little recourse. However, while these segments lay out the grim details — for instance, the dangerous lead exposure at a Florida smelting plant, which impacted the children of numerous employees — the film only skims the surface of each case, moving on quickly to subsequent examples rather than reckoning with broader ethical concerns, or laying out the challenges that stand in the way of justice. In this way, the film’s faint echoes about the financial constraints placed on Black lives never truly become the roaring, all-encompassing call to action (or at least, the desperate cry for recognition) that they could be. Beyond a point, “Civil” depends far more on implication, and on intellectual inference, than it does on loaded imagery and raw emotion to reveal its broader scope.

However, despite this misstep in the film’s top-down perspective, its intimate moments often paint rich pictures of inner lives — not only Crump’s, but the victims he’s tasked with memorializing, by capturing the way their friends and family members knew them. In this way, the portraits in “Civil” are allowed to transform from narrow and singular, as frequently depicted by mass media, to vivid and multifaceted. At one point, Crump laments not having had the chance to meet one of the victims in life, but both he and Hallgren succeed at letting us know them, in what little way we can.