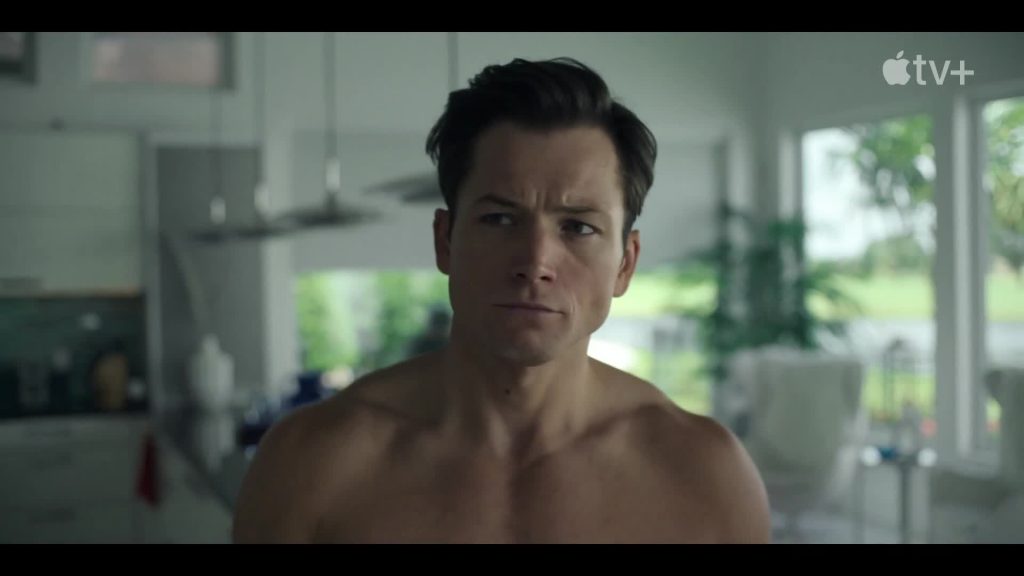 It is becoming increasingly difficult to make a true-crime adaptation that differs from the countless films, series, and podcasts out there. Whether they play with tone, style, genre, or perspective, there are only so many ways you can tell the story of a murderer without it beginning to feel repetitive. This year alone, so many true-crime series have tried to upend expectations and fail that any new attempts are met with less enthusiasm each time. The latest addition to the sub-genre is Black Bird. Based on the memoir by James Keene, AppleTV+’s latest series is an intriguing twist on the expected true crime formula along with two intense leading performances from Taron Egerton and Paul Walter Hauser as two very different criminals whose fates become connected to one another.

Set in the mid-1990s, Black Bird is comprised of two parallel stories. The first focuses on Jimmy Keene (Taron Egerton), a smooth talker who has made a lot of money as a drug dealer. When he is caught by the FBI and sentenced to ten years in a minimum-security prison, Jimmy is offered the chance to be set free in exchange for going undercover in a maximum-security prison where he is tasked with getting a confession from serial killer Larry DeWayne Hall (Paul Walter Hauser). When Jimmy’s father, played by the late Ray Liotta, suffers a stroke, Jimmy takes the deal. The second story involves FBI agent Lauren McCauley (Sepideh Moafi) and Detective Brian Miller (Greg Kinnear) who desperately search through Hall’s purported victims to find evidence to keep him in prison before an appeal sets him free.

The early episodes of Black Bird spend a good amount of time establishing who Jimmy and Larry are. Taron Egerton, in what may be one of his most challenging roles, plays Jimmy as an over-confident player who gets in way over his head. Hauser, who has developed into one hell of an actor, delivers a chilling performance as the “serial confessor” Hall. With so many infamous serial killers in the annals of crime, I was shocked to be so unfamiliar with Hall’s crimes. Knowing as little as possible about him helps this series feel more disturbing and thrilling as you are left stunned that this story could possibly be based on actual events. It takes three episodes before Jimmy and Larry’s relationship begins to develop, but none of that time is wasted as the story spends ample time building multiple elements to complicate the story. Jimmy must not only contend with his assignment to elicit the truth from Hall but he must also deal with other factions in prison including a crooked guard and a member of the mob who takes a liking to him.

As good as Egerton and Hauser are on screen together, they spend a good amount of time apart and each actor owns the scenes they are in. But, the supporting players in this are also very good. Sepideh Moafi (The L Word, The Deuce) plays McCauley as a skilled investigator and goes to the mat with Egerton in each scene. Never taking Jimmy’s act as anything more than a performance, McCauley and Miller delve into their investigation with an intensity that really sends home the urgency of what they are trying to accomplish. Kinnear is quite good as the small-town cop who knows from the outset that Hall is a monster even when those around him don’t believe it. The two are very good and would have been the buzziest part of this cast if not for the late Ray Liotta. Liotta, who plays Jimmy’s father, gives a brutally emotional performance, unlike anything he has done in quite a long time that anchors Jimmy’s redemption from criminal to key in taking down Hall.

With an eerie and memorable score by Mogwai (Kin, ZeroZeroZero), Black Bird takes six episodes to unveil the full scope of Larry Hall’s crimes as well as Jimmy Keene’s experiences in trying to survive in prison. Created by Dennis Lehane, best known for crime novels Mystic River, Gone Baby Gone, Shutter Island, and Live By Night, this series takes elements from serial killer stories, prison dramas, police procedurals, and more and combines them in a way that makes for very compelling television. Directed by Michael R. Roskam (The Drop), Joe Chappelle (The Wire), and Jim McKay (Better Call Saul), Black Bird creates a vivid look at prison life that we often don’t see on screen. I continuously sympathized with Jimmy while sometimes questioning whether Larry Hall was guilty or mentally ill. Lehane and his writing team do a stellar job in making you question your own instincts about these characters until the very last episode.

I was not expecting Black Bird to be more than just another true-crime adaptation when I first heard about it. I should have trusted that between Dennis Lehane behind the scenes and Taron Egerton and Paul Walter Hauser in front of the camera that this would be anything but great. A distinct take on the serial killer genre, Black Bird benefits from excellent performances from the entire cast, especially the late, great Ray Liotta. While many elements of this story could have turned into cliche and formulaic tropes, Black Bird never succumbs to playing it safe. This is a very compelling story that kept me glued for all six episodes and is a tale I will not soon forget.