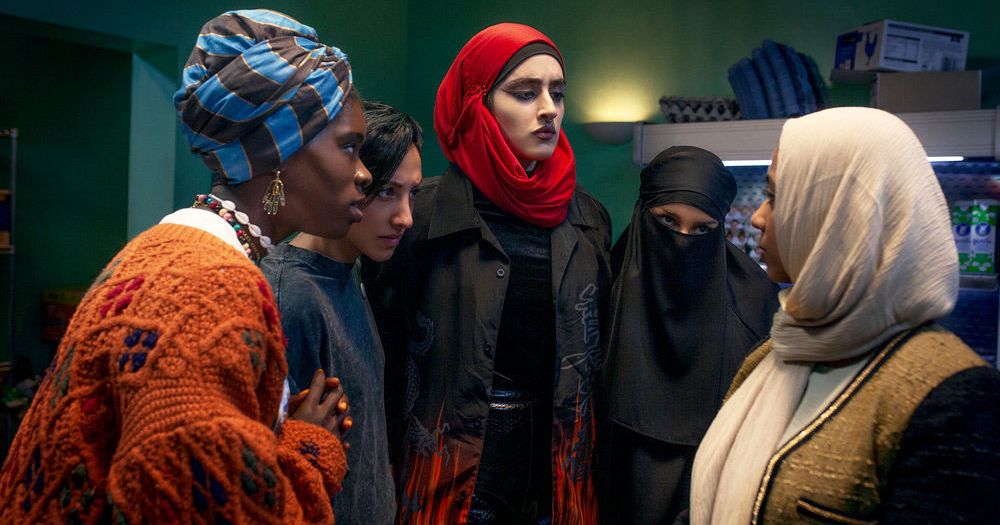 mina Hussain. 26. Capricorn. Finishing a PhD in microbiology. Prone to excessive sweating, secret American folk-guitar-playing in her wardrobe, and husband-finding. Desperately seeking a nice Muslim boy with eyebrows you can hang on to. No, strike that! What she wants is to join an all-female, Muslim, post-punk band called Lady Parts. Truly, this is the British-Asian comedy series you’ve been waiting for your whole representation-starved life. And yes, I am addressing my own young self here.

We Are Lady Parts is a rowdy, spoofy, extremely silly and surprisingly sweet Channel 4 sitcom written, directed and produced by Nida Manzoor (Doctor Who, Enterprice). Her first series deserves to secure her reputation as a rising star. To put it as bluntly as one of Lady Parts’ songs (such as Nobody’s Gonna Honour Kill My Sister But Me), we have not seen anything like this on mainstream British TV: a comedy in which Muslim women are permitted to be funny, sexual, ridiculous, religious, angry, conflicted. Themselves, basically.

We Are Lady Parts, which passes the Riz test with flying colours, may not be making big, serious statements about race, identity politics and the oppression of Muslim women, but in its inherent subversiveness it has something to say about all of it. Here is a show that vapes in the face of stereotypes, like the fug of steam that billows from the niqab of band manager Momtaz.

Its refusal to conform is evident in the very first scene, in which Amina(Anjana Vasan) meets with the conservative family of a prospective husband. So far, so East Is East. Except this is a culture clash. The boy’s family is far more religious than Amina’s mother and father, who would much rather their daughter stopped obsessing about a husband and went Interrailing. These are not the brown-skinned parents we are used to seeing on our screens – loving, liberal, as irritating as anyone else – though many of us have grown up with them in our homes.

In the tightly packed, knowing opening episode, the other band members are introduced. Lead singer Saira, bassist Bisma, drummer Ayesha, and Momtaz, each of them cartoonish yet gloriously stereotype-defying. The twin narratives are set up, both of them classic tropes: finding a husband, finding a new band member. Amina may be looking for the former, but clearly what this innocent in pastel hijabs requires is an ear-bleeding lesson in riot grrrl feminism by the latter. Meanwhile, her conventional best friend, Noor, orders her to “keep it halal” and take down the music poster secretly tacked to the inside of her wardrobe, because no self-respecting Muslim man wants to marry a girl with an old white man on her wall. “That is not a white man,” says Amina, incensed. “That is Don McLean!”

The silliness can get a bit one-note, and the jokes don’t always land. But the main characters and the strength of their sisterhood are beautifully drawn, and the original songs, written by Manzoor and her two siblings, are hilarious. Manzoor has done a brilliant job of expressing the tension between the furious lyrics – “I’m gonna kill my sister! She stole my eyeliner!” – and the daily lives of the women. After they play together, they kneel together on their prayer rugs. They go to work, but sell a feminist comic called The Killing Project (Apocalypse Vag) down the market. Then there’s the Uber, in which an endless traffic of questions, assumptions, and loaded comments from white passengers must be negotiated. Ayesha’s Uber, by the way, is also a vehicle for a particularly joyous scene in which all four women freak out to the Proclaimers’ I’m Gonna Be (500 Miles).

We Are Lady Parts started out as a Channel 4 comedy blap, an initiative supporting new talent out of which Chewing Gum and GameFace also grew. Manzoor’s short, then called Lady Parts, got an amazing response, but also, depressingly, a torrent of abuse. Apparently it remains the only blap with comments disabled on YouTube. Happily, Manzoor ploughed on and made the series she wanted to make, which probably owes more to Spinal Tap than it does to Goodness Gracious Me. For this I salute it, because it is twice as hard to be lighthearted when you have to bear the weight of representation. If the band is, as its reluctant new lead guitarist Amina describes it, “a confused mix of hash anthems and sour girl power, one part boredom, two parts identity crisis”, then We Are Lady Parts is an assured mix of second-generation cultural confusion and millennial feminism, one part Chewing Gum to two parts Wayne’s World. Its silliness is its strength, and young and older me are thankful for it.