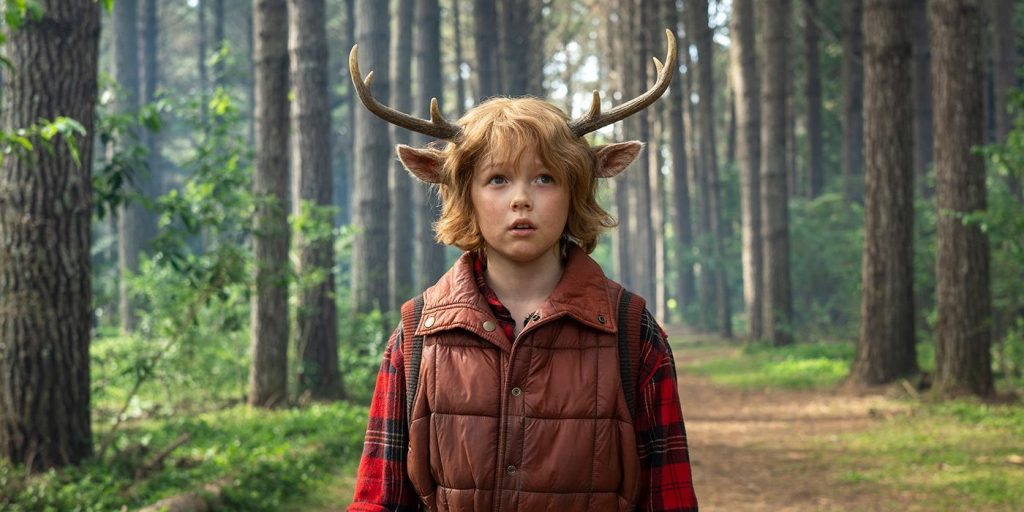 I would invite you to watch Sweet Tooth with an open mind and, ideally, a large drink inside you and another one to hand. For I cannot for the life of me tell if it is the worst thing I have ever seen, or the greatest work devised for the entertainment of humankind.

To explain: Sweet Tooth is set 10 years after the Great Crumble. A mysterious virus has swept the globe. Humanity has descended into chaos (“It sucks,” says one survivor. “No rules. No laws. Once the internet went down, it was over.” We pause to say a silent prayer that Covid never affected wifi coverage).

At the same time as “the Sick” appeared, all human babies started being born as animal hybrids. Yes, you read that correctly. Come back here right now and see the rest.

Dr Aditya Singh (Adeel Akhtar), whose story will be one of the B-plots we follow, is led into a maternity ward by a supremely baffled nurse. He finds it filled with newborns who have had furry, feathery or prickly-hedgehog filters placed over them by someone working with enthusiasm and a strict budget. Sometimes they look cute, sometimes they look as if they are plummeting down the uncanny valley and will never stop.

One father (Will Forte), of a baby who has emerged with touches of deer about him, sets out early for the hills. They take refuge in Yellowstone national park while the world goes to hell in a handcart.

We watch the baby – Gus (Christian Convery) – grow up over the next 10 years. He learns to fish and tap maple trees for syrup (hence his nickname, from which the stupid title of the show is taken); his antlers come in above his little deer ears, that sort of thing. Their idyll is shattered when they are spotted by one of the Real Men: an admirably on-the-nose name for the kind of militia so commonly included in post-apocalyptic US visions that their heavily armed presence almost amounts to a mandate. This violent assemblage have not grasped that correlation does not imply causation and therefore blame the hybrids for the virus. They are bent on hunting down and killing the lot of them (although sometimes they take “special ones” “elsewhere”).

Papa dies defending the homestead. Gus fends for himself – badly, considering he should have a decade of survivalist skills under his belt – until he is saved from another band of Real Men by Jep (Nonso Anozie). Jep becomes his unwilling protector and the rest of the series is structured round their road trip across the US to Colorado, to find Gus’s mother. Did I mention that his father left him clues about where to find the mementoes of her that he had buried in a locked metal box under a tree, and that his father died with the keys in his hand? Sorry, I thought that was a given.

Meanwhile, Dr Singh is keeping his wife Rani (Aliza Vellani) – an early sufferer of the Sick – alive with a special serum that an even cleverer doctor is managing somehow to produce in a local diner repurposed as a medical centre and (I guess?) research laboratory. But! They are down to the last two vials; the cleverer doctor is dying of cancer. She hands over her research notes to Dr Singh, so he can carry on the work.

He is horrified by what he finds therein. Could it be anything to do with the fact that the Real Men occasionally visit the diner and drop off hybrid-child-sized metal boxes? Who can say?

There is also a third plot strand, involving an introverted therapist who finds the post-pandemic world to her liking, goes to live in the abandoned zoo (don’t ask me) and ends up starting a sanctuary for the child-critters when someone abandons a pig-snouted baby (adorable! Want!) at her door.

There is more – including purple flowers that sprout when an area has been touched by the Sick, James Brolin voiceovers and a band of teenage environmental activists led by a Thunberg-esque Bear (Stefania LaVie Owen) – but I think you have the idea. Sweet Tooth is part fantasy, part sci-fi, part whimsy, part cold-eyed realism and most points in between. It is either warmly eccentric or hysterically crazy, perfect entertainment or a horrifying attempt to parlay the pandemic into a commercially palatable mashup. It is undoubtedly aimed at a younger-than-full-adult audience; my 10-year-old is entranced. I am, too, although I can’t yet work out why.