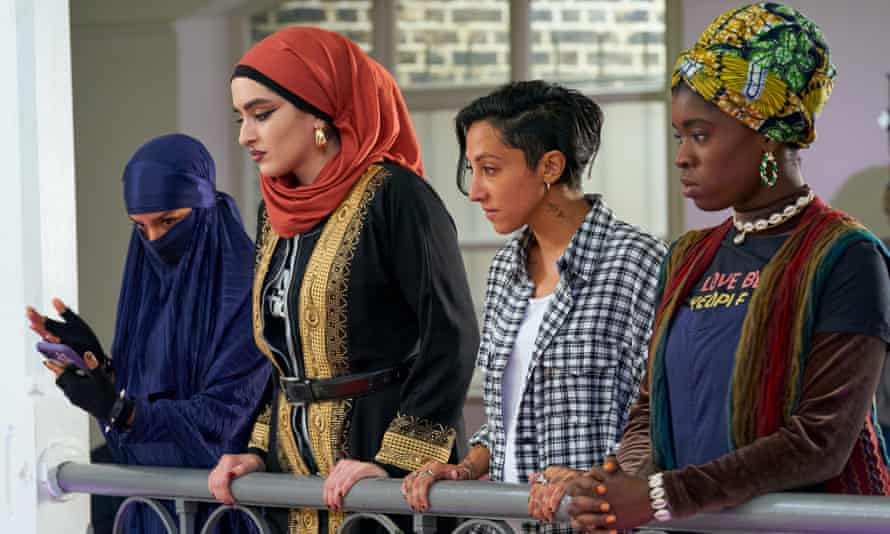 When Amina Hussein (Anjana Vasan) walks into the dingy, underlit halal butcher shop in East London, she’s looking for a husband. Specifically, the mysterious Muslim man with radiant eyes, long hair and a full beard, who, earlier in the day, handed her a flyer leading to this very location. What she finds instead is a band.

We Are Lady Parts, a Peacock original comedy, is the chaotic and delightfully entertaining story of how Amina, a shy, naïve graduate student who spends more time with microbes than people, becomes the newest member of Lady Parts, an all-women Muslim punk rock group. (It joins the streaming service’s other acclaimed original comedy about a group of female musicians, Girls5eva, though the characters in that show are in their 40s and their music is nostalgic 90s pop.)

Written and created by Nida Manzoor, the tightly conceived six episodes combine the hopeless romantic tone of Bridget Jones’s Diary with the cringe humor of Michaela Coel’s Chewing Gum and the political undertones of Eyad Zahra’s 2010 film The Taqwacores to create an absorbing and binge-worthy show.

The women of Lady Parts operate on their own terms, and their distinctive personalities make them exciting to watch. There’s emotionally unavailable lead singer Saira (Sarah Kameela Impey), who hacks meat at the butcher shop during the day; mercurial drummer Ayesha (Juliette Motamed), who shuttles entitled Londoners around as an Uber driver; wary band manager Momtaz (Lucie Shorthouse), whose past is shrouded in mystery but whose present days are spent selling lingerie; and calming Bisma (Faith Omole), bassist, mother of one and a cartoonist trying to sell her self-published comic about a group of young women who become “homicidal maniacs on their periods.”

For these women, the band is a serious venture, a way to express themselves and push back against a misogynistic, capitalistic and Islamophobic society that oppresses and ostracizes them. It’s also a way for them to lean into the pleasures of sisterhood, crack jokes and have a bit of fun.

“So wait, are you here to audition or what?” a confused Momtaz asks Amina when the latter arrives looking for the guy who gave her the flyer. The band desperately needs a lead guitarist, someone who, according to Saira, can round out their sound and ensure they win an upcoming local music competition.

Before Amina can whip up an answer, Saira leaps from her seat. “You went to St. Abigail’s Primary School,” she says, staring intently at Amina. She remembers Amina from a talent show in which Amina, a gifted guitarist, was so overcome by anxiety and stage fright that she puked on everyone in the front row. Thrilled by this news, the band fervently asks Amina to play something — anything — but she refuses: “I don’t perform. My nervous disposition induces diarrhea and vomiting,” Amina admits before stumbling out the door and running down the street.

Saira, however, won’t be stopped. She sees Amina’s potential and knows she’ll be the perfect fifth member. The plan to recruit her involves Ayesha’s alluring and handsome brother Ashan (Zaqi Ismail), who initially handed Amina the audition flyer. They beg him to ask her on a date, knowing Amina will join if a potential suitor is involved.

The next five episodes masterfully chronicle Amina’s new life, which entails running from band rehearsal to lab, helping her more conservative friend Noor (Aiysha Hart) plan a wedding and keeping her feelings (and fantasies) about Ashan in check. We Are Lady Parts is not always laugh-out-loud funny, but it’s sharp and quick witted, with Manzoor’s writing and the zesty style (some episodes emphasize Amina’s overactive imagination, bringing her daydreams to visual life with lots of pink and the occasional puppet) elevating the comedic moments.

The performances — dynamic, confident, seamless in hitting different emotional beats — also add to the show’s affecting quality. Impey, in particular, is outstanding as the moody, passionate lead singer, whose commitment to the band is partially fueled by, and cover for, the isolation she feels in other areas of her life. Moving effortlessly from steely stares and harsh delivery to ambivalence and vulnerability, the actress steals almost every scene she’s in.

In interviews and columns about We Are Lady Parts, Manzoor, who directed the first season of the British comedy series Enterprice as well as episodes of Doctor Who, lingers on the weight of representation: With so few depictions of Muslim women on screen, her show felt saddled with a responsibility to do the characters justice, to give voice to a people. That, of course, is a trap — representation can be the beginning, but never the end. Historically marginalized people shouldn’t exist as ideological placeholders.

Manzoor largely avoids that fate in We Are Lady Parts by crafting characters whose journeys to punk are complemented by their relationship to their religion, not necessarily at odds with it. Here, Islam is not merely a plot device, a constraint-filled, monolithic faith from which Amina must escape. Rather, the questions Amina asks herself as a 20-something sorting through her identity are more complicated: How can she express herself in a way that honors her existing beliefs and her burgeoning interest in punk music?  What are the limits, how can she shatter them and is it worth it? We Are Lady Parts might have explored these nuances a bit more, but that’s just another reason why it deserves a second season.